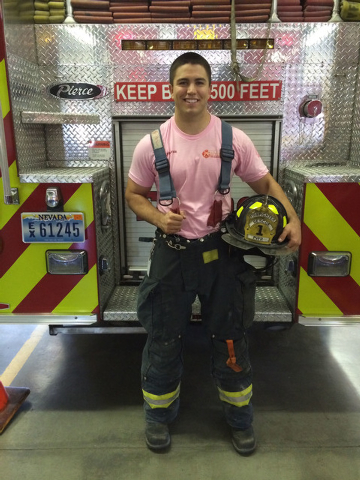 Local residents will notice a change in the appearance of crews with Pahrump Valley Fire and Rescue Services this week.

International Association of Firefighters Local 4068 President Justin Snow said crews are wearing the shirts throughout the month of October.

“From the 15th till the 31st, we’ll be wearing pink shirts while on duty,” he said. “The IAFF has an event every year in October and there is a nationwide competition where various local fire departments design and print their own shirts. We are entered in that and want the community to vote for ours.”

Fire Chief Scott Lewis said crews first had to seek permission from the town to wear the shirts this month.

“It’s all in the name of prevention of breast cancer and we feel it’s very worthwhile,” Lewis said. “Union President Justin Snow I got together and thought it was a great idea. Other departments in Nevada are also doing the same thing. It’s not a fashion statement and clearly it’s not change in our uniforms, but we felt that it’s important to do this and we support everything that’s done in the fight against breast cancer.”

Pahrump Town Manager Susan Holecheck said she applauds the efforts of the fire department and fully supports their action.

“It makes me feel really good that they want to do that. I just want people to know that it is not a town expense because the union is paying for the shirts,” she said. “It did not come from the town’s coffers.”

“I arrived in Pahrump last summer and I was diagnosed several weeks later with breast cancer,” Holecheck recalled. “I can happily say, despite getting radiation treatment and having surgery and everything else, I missed only three days of work. “My most recent mammogram came back negative, so, so far so good. I have to say that it’s never easy for anyone to undergo radiation treatments twice a day.”

He also serves as the Public Outreach Committee Chairman.

“It’s the very first time the Pahrump Valley Firefighters IAFF Local 4068 will be wearing pink shirts while on duty to raise awareness in our community this month,” Delucchi said. “We also entered our pink T-shirt in the annual ‘IAFF Best Pink T-shirt Design Contest.’ “People can view the t-shirts from other IAFF Locals, by clicking on http://www.iaff.org/Events/Pink2014/contest.asp,” he said.

According to the American Cancer Society, in the U.S., 1 in 8 women will be diagnosed with breast cancer.

Delucchi said local firefighters get involved for many reasons, and often it’s because they have been personally affected by the disease.

“Firefighters exposed to carcinogens and other chemicals while on the job are disproportionately diagnosed with breast cancer which is just one of many cancers linked to the work firefighters do,” he said. “Over the past 3 years, and through their collective efforts, IAFF affiliates have raised funds benefitting national and local organizations dedicated to finding a cure for cancer,” Delucchi said.

Rules dictate, one vote only.

The winner will be announced late next month.