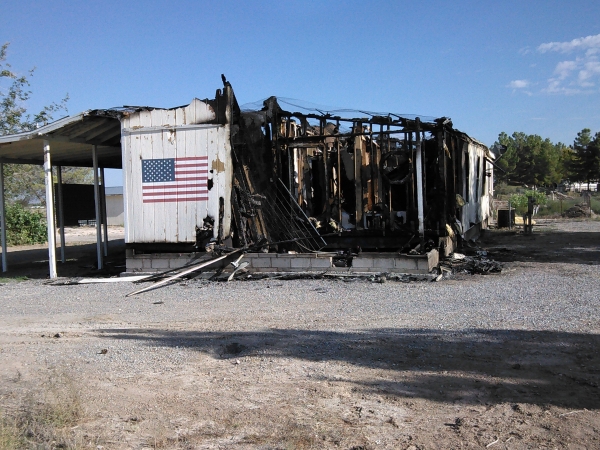 Arson is suspected as the cause of a structure fire Saturday afternoon that gutted a home on the south end of town.

Pahrump Fire and Rescue Service crews responded to a home on Thousandaire, just adjacent to a local RV park.

As crews began fighting to contain the fire, Chief Scott Lewis said the initial investigation turned to a juvenile who was living at the residence.

As a result, the sheriff’s office and a juvenile probation officer were summoned to the scene.

Lewis said fire crews were presented with a challenging assignment, as they arrived on scene to a well-involved structure fire, which took roughly an hour to extinguish the blaze.

“There were heavy fire conditions along the front corner of the house, where crews commenced fire suppression,” he said. “It was a difficult fire due to high temperatures and high winds, but the crews did a really good job, considering all that they were facing.”

The home sustained considerable damage according to Lewis, as the fire spread throughout the manufactured home.

“It also went into the attic space and it went underneath the structure simultaneously due to the winds,” he said. “The winds were actually pushing the fire into the structure, both above the roof and under it. The structure itself is still standing, but there was considerable damage.”

“The sheriff’s office did a great job and I appreciate the juvenile probation officer coming out on a Saturday and assisting,” he said. “We also had the county come in and refill our air bottles, while our guys were still at task. They came and made sure we had enough air for the duration of the incident, and that was helpful.”