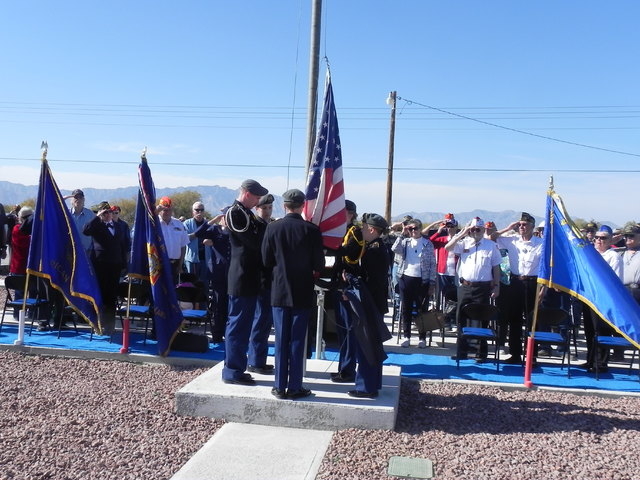 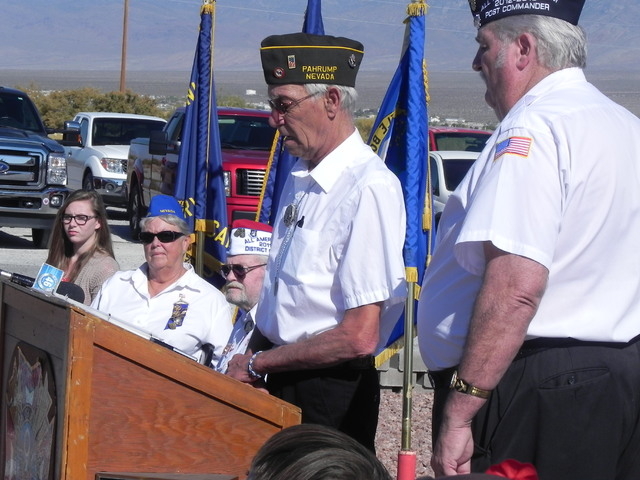 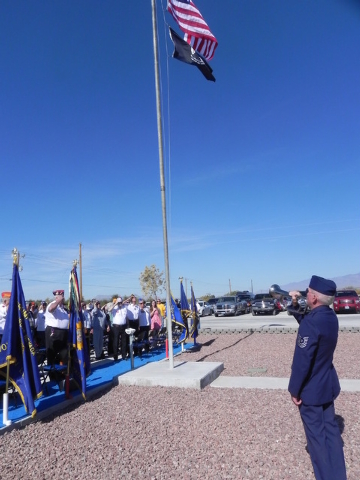 On the 11th hour of the 11th day of the 11th month — originally called to remember the time the armistice was signed ending World War I — area veterans gathered Tuesday at Veterans of Foreign Wars Post No. 10054 on Homestead Road to reflect on war and the veterans who fought in them.

But besides the lessons of war, speakers at the annual Veterans Day ceremony also talked a lot about peace and service to country.

“We remember how men and women set aside their civilian pursuits to serve their nation’s cause, defending the freedom of man and preserving our precious American heritage,” VFW Post Commander Tom Vick said. “We believe our strength on the field of battle, on the supply lines, which nourished our armed might, lay in the justice of our cause against the forces of evil. We believe that our determination made us better warriors because we fought with our minds and our hearts as well as our bodies and continue to do so today.”

He said service to country doesn’t end with military service, they continue endeavors on behalf of an honorable world peace and with gratitude to those who gave their lives.

“Out of blood and sweat we learned of purpose, sacrifice, tolerance, bravery and discipline. Those are solid stones upon which a great nation is built. In our continuing quest for an honorable world peace we must cultivate these virtues,” Vick said.

VFW Ladies Auxiliary member Viola Morrissey said waging war involves more than combatants on the field of battle, but the fireplaces in the hometowns.

“The repercussions of war’s terrible brutality have chilled the heart and dimmed the hopes and dreams of many a loved one left behind on the home front. While the horrors of the battlefield may not have been our experience, we have lived with the terrifying loneliness created to answer an aggressor’s challenge,” she said. “Our hearts beat in tune with those of other nations fighting for freedom and the dignity and opportunity of mankind. In our constant quest for an honorable world peace there is need for unity of purpose if we truly are to move toward a brighter tomorrow.”

Senior Vice Commander Ed Morrissey said if there is glory in war, it’s in the incredible spirit it created. He urged the crowd to honor those who serve in public service.

“Yet too, in warfare, greed and brutality are epidemic. Too often it is these latter which persist in the peace that follows. Let us strive to see that the same spirit of self-sacrifice is cultivated in peace as has been exhibited in war,” Ed Morrissey said. “It behooves us to rear new standards of success, to inspire youth in peace as youth was inspired in war.”

“Let us honor those men who carry into ordinary affairs of life a noble idealism and a sincere capacity for self-devotion. Let us translate the devotion of war into a devotion of peace. Let us will to live as well as die for our country,” he said.

VFW Junior Vice Commoner Dale Paige said, “courage is one of the virtues born of war — the courage of individuals in the face of danger and the courage of nations to protect the weak and punish the aggressor. There is bravery to be shown in peace as well.”

He said people can reach new heights of civilization and opportunity if people have the courage to work for a better way of life.

“The bravery that fights for political, social, economic and spiritual gains may be difficult to practice, maybe unsung when achieved, but it is all the more worth striving for,” Paige said. He added, “we face a different breed of enemy today, terrorism and enemies with weapons of mass destruction. We cannot let fear prevail, we must and will survive.”

In his closing remarks, Vick said, “in time of peace we can use the ennobling virtues of war and put behind us its ugliness and suffering. In peace we shall go forward together to scale new heights of achievement in unity of purpose, in sacrifice for the common good, in tolerance for those of difference faiths and creeds in bravery to fight for social and economic gains and in the discipline of good citizenship.”