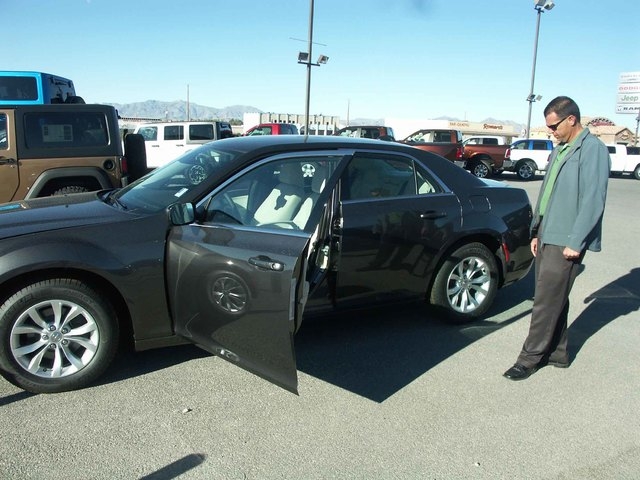 Even though taxable sales in Nye County continue to dip further by double-digits, there’s evidence that the local economy is still rebounding.

Driven by lower gas prices, car dealerships in Nye County generated $5.8 million in November, an increase of 27.3 percent from the same month in 2013, according to the state Department of Taxation. Category sales are up nearly 6 percent to $27.1 million for the first five months of the fiscal year, which began July 1.

The state released the November numbers the first week in February.

Car dealerships in Nye County have witnessed a significant increase in customer interest equating to sales.

Don Trudeau, co-owner of Saitta Trudeau Jeep, Chrysler, Dodge said this week his dealership has seen a noticeable increase in sales this year when compared to last year at this time.

“Right now sales are good and we have seen an increase this year at probably about 15 percent,” he said. “We are seeing the smaller sport utility vehicles sell pretty well. The Jeep Cherokee came out and it’s selling pretty well. Trucks always sell good in our community and that goes for all Jeeps as well.”

Though the price for a gallon of gas has fallen considerably in the past few months, Trudeau said he doesn’t think the lower prices had much to do with the increase in new and used car sales at the dealership.

“I don’t really think that gas prices has made a big difference in sales because we have seen a significant uptick since gas prices dropped,” he said. “Our unemployment rate has gone down and we’re seeing some building and construction going on in town. I just think that it’s gradually moving in the right direction.” he said.

Greg Mier, general sales manager for Pahrump Valley Auto Plaza said his dealership as well has seen an increase in business so far when compared to last year.

“Sales have been good,” he said. “Sometimes you have your ups and downs and December was a little bit tougher than the year before but every other month in the last three to four months, we have seen an increase.”

Additionally, Mier said he believes recent manufacturer customer incentives are delivering potential car owners to the showroom floor as of late as well as lower prices at the pump.

“The low price of gas really helps when you are looking to buy something bigger,” he said. “People are buying models all across the board because we have pretty diverse model lines.”

The American Muscle Car has been a mainstay among the Chevy models for decades.

Mier said aside from an increase in sales for sport utility vehicles, passenger cars and trucks, even the sports cars are getting a second look from potential buyers.

“We still have our core Camaro buyers,” he said. “There are those who want to drive something a little faster that gets up and goes that handles and performs well. We have a pretty diverse lineup and a diverse customer base, so we sell a little bit of everything.”

While dealerships are seeing an increase, taxable sales in the county dropped 17.6 percent in November to $41.4 million. The decrease is driven by the end of construction of Crescent Dunes solar project outside Tonopah.