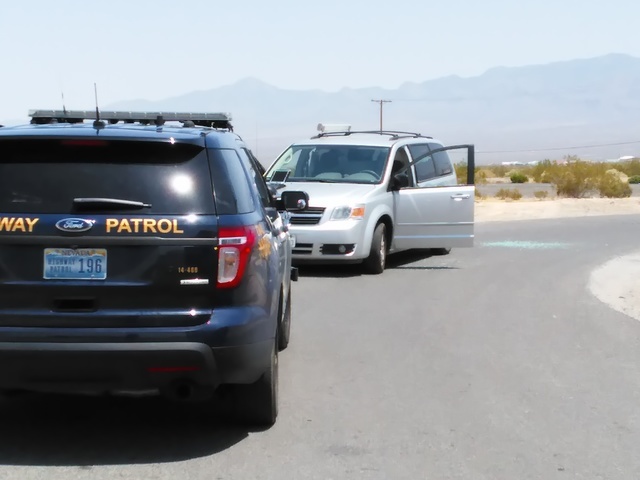 Selwyn Harris/Pahrump Valley Times Shattered glass from the minivan sits on the ground following what police are calling a road rage incident on Monday. A couple on vacation from the Netherlands were followed to a local convenience store where the incident took place, leaving one man injured.

A couple on vacation from the Netherlands experienced a fit of road rage at the hands of a motorist on Monday, leaving one man injured.

He noted the couple had the right of way.

These folks were driving in from Death Valley, he said. They were stopped at the stop sign at Bell Vista and 160 looking to turn right. Another vehicle was stopped opposite of them westbound on Bell Vista at the stop sign. Traffic was clear for them and they pulled out and the other driver apparently didnt like it.

McNeal said once both vehicles were traveling southbound on 160, the unknown suspect followed the silver Chrysler minivan into the entrance of Horizon Market at Highway 160 and Mesquite Avenue.

He noted thats when the trouble began.

He followed the couple to Horizon Market where he got out of his vehicle, picked up a large rock and threw it at the drivers side window of the van, he said. Nye County Sheriffs deputies are looking for that suspect vehicle to try to find the perpetrator. He did flee the scene into town.

Pahrump Valley Fire and Rescue medics were dispatched to the scene, as the driver of the minivan was hit by the rock after shattering the drivers side window.

Hes going to be okay, McNeal said. He did say the rock hit him in the head, but he will be okay. They dont want to ruin their vacation any more than they have to.

The injured man indicated that the other driver was tailgating his vehicle once both were on Highway 160 driving into the heart of town.

He pulled into the Horizon Market in order to speak with the enraged suspect.

He just got out of his vehicle, picked up a big rock and threw it at me, the man explained. I dont know what I did wrong. The police said I had the right of way. I just dont understand it.

The Nye County Sheriffs office has yet to release a description of the suspect vehicle.