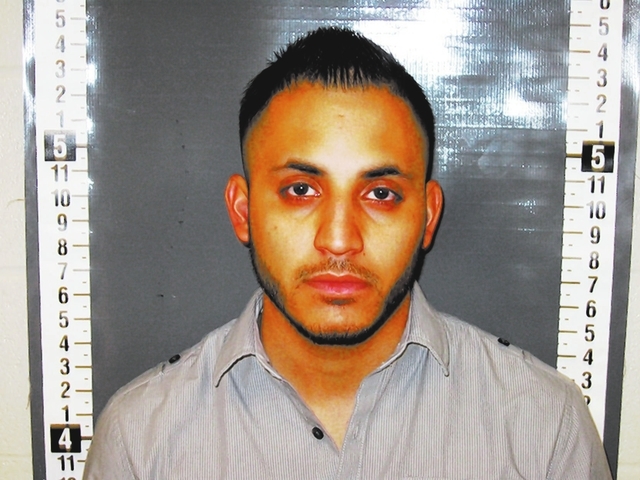 A man charged with attempted high-level cocaine trafficking in Pahrump in 2010 was sentenced to a maximum of 20 years in prison this week.

Ivan Rubio appeared in District Court Monday morning to be sentenced on one count each of attempted mid-level and attempted high-level cocaine trafficking.

The charges reportedly stem from an Aug. 24, 2010 incident where he was found with somewhere between 14 to 28 grams of cocaine in his possession. In the state of Nevada, that amount of the illegal substance constitutes a trafficking level of cocaine.

Although he acknowledged his client had committed a serious offense, Rubio’s attorney, Tony Abbatangelo, told the court his client was an intelligent, hard-working man who had stayed out of trouble since this incident, and as such he thought Rubio would be a good candidate for probation.

“Mr. Rubio and his brother, when this happened, they were younger and they were doing stupid things. … I’ve spoken with Mr. Rubio and his brother and every time I’ve met with them they’ve had the support of their family. It’s a very unified family. They’ve come together, stayed together, and they’ve acknowledged that this behavior is not correct. But they’re proud of the changes they’ve made since then. Mr. Rubio, according to the PSI has been working up in Dakota for three years. They moved out of town because they knew nothing good was happening here for them and they’ve taken responsibility. He is hard-working, staying out of trouble and hasn’t picked up any new charges,” he said.

Although both Abbatangelo and the Department of Parole and Probation were recommending probation on the attempted high-level trafficking charge in the case, Deputy District Attorney Patrick Ferguson said he believed Rubio deserved to spend time in prison for bringing large amounts of cocaine into the Pahrump community.

“We did negotiate the case such that we would allow the defense to argue for probation, but that does not mean we are arguing for or agreeing to probation. What we have here, originally, were two high-level trafficking cases, notwithstanding the negotiations. We have high trafficking levels of cocaine in both cases. Your honor is well aware of the problems the abuse and sales of these illegal drugs cause our community. We see the drug addicts who prey on the system in their abuse and in the crimes they commit. The sales of high levels of narcotics, as we see here, feeds into the drug trade. We have criminal organizations out of other countries, Mexico and Central America and South America, that are fed by the money that gets paid by a junkie that goes to a dealer that goes to a distributor — it’s basically organized criminal activity. We need to send a message to those who are trafficking that when you do that you go to prison,” he said.

Ultimately, Presiding Judge Robert Lane sided with the state, explaining that Rubio needed to face the consequences for his actions.

“There are different reasons judges sentence people a certain way and as (Ferguson) pointed out one of those is to set an example to let other people who are thinking about dealing in large amounts of cocaine know what will happen to them if they get caught doing that. Mr. Abbatangelo also made some good points, too. It’s noted in the PSI that you don’t have any gang affiliations, you come from a good family and that you’re smart and basically a good man who could have been a good person in our community and a leader for other people. Unfortunately you made some bad choices and with bad choices come bad consequences,” he said. “It’s always sad when you have someone who’s an intelligent, good man and you have to send them off to prison, but you made some bad choices and I think Mr. Ferguson is right. If you’re going to traffic in high amounts of cocaine, you’re going to have to face the consequences for it.”