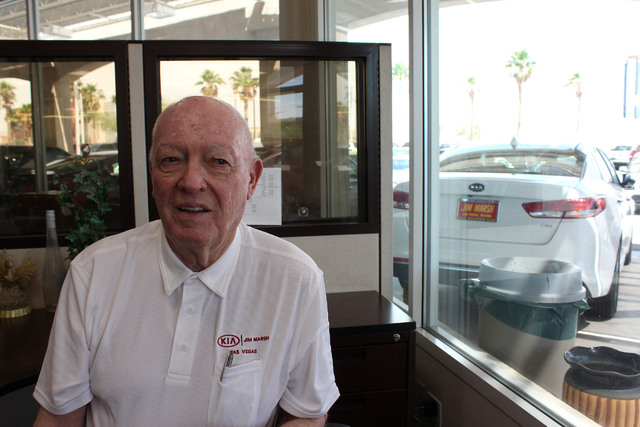 The celebration of Tonopah’s founder Jim Butler has been known as a time of rejoicing and remembrance.

But the town’s citizens and hoteliers saw a different picture during the May event — with some saying the level of enforcement by the Nye County Sheriff’s Office during the weeklong Jim Butler Days event was too high, leading to a suggestion that Butler Days be canceled.

“People were afraid to leave their houses for fear that if they did anything—stepping across the street the wrong way—that they’d get arrested,” said Jim Marsh, owner of the Tonopah Station hotel-casino and a Kia and Chrysler Jeep dealership franchise in Las Vegas.

Marsh said local residents and visitors don’t mind enforcement, but it was more of an intimidation factor that he didn’t think was acceptable during the event that occurred from May 22-29.

“I don’t think anybody minds having enforcement,” Marsh said. “That’s a reasonable thing. It was a complete over-intimidation of the people that were there.”

In a letter to the editor to the Tonopah Times-Bonanza, Marsh also said tourism could be affected during future Butler Days, as he said the number of citations handed out caused “many visitors to state they would not return for any future Butler Days because of the intimidating effect of such police activity,” Marsh’s June 2 letter stated.

Marsh also pointed to other businesses reporting that there was a significant drop in sales that weekend, as compared to what a normal weekend would produce. He also called for an increase of Tonopah’s 25 mph speed limit, which he called unrealistic and a speed trap for locals and motorists passing through.

“Many businesses reported that sales dropped significantly, below what a normal weekend would usually be,” Marsh wrote in the letter published June 22 in the Times-Bonanza. “Under these circumstances, I would recommend the city’s fathers cancel Butler Days.”

John McCormick, general manager of the Mizpah Hotel, agreed with Marsh on several points he made in his letter.

“The police presence was ridiculous quite frankly,” McCormick said. “People were pulled over left and right. I saw motorcycle cops out there that as soon as they were done ticketing somebody; within moments, they were pulling somebody else over.”

McCormick wouldn’t go as far as Marsh, who called for an increase in Tonopah’s 25 mph speed limit, though he agreed there was too much enforcement during Jim Butler Days in Tonopah.

McCormick also agreed that too much police enforcement during the festivities led to a decrease in tourism.

“My revenues here were lower than the four years that I’ve been here,” McCormick said.

The Nye County Sheriff’s Office has responded to the claims with its own letter to the editor of the Tonopah Times-Bonanza, which readers can see in the July 6 edition. Some of those comments were referenced here.

“What most people do not understand is the motors and patrol deputies simply enforce current laws that are on the books,” said Sgt. Duane Downing, of the Nye County Sheriff’s Office. “The enforcement that took place was mainly around the public events near the center of town. Traffic was controlled to make the event much safer for the pedestrians.

“These events entailed closing one lane of traffic for the street dance, and then an entire section of the main street for the parade,” Downing said. “A detour route was initiated and normal traffic was diverted around the closed area through residential districts.”

Downing said in an email provided to the Times-Bonanza that the proximity of motorists to pedestrians could’ve resulted in a dangerous situation.

“These activities put pedestrians in close proximity to traffic; even a minor violation of traffic law could easily result in major injury to the multitudes of people attending the event or those attempting to use their normally quiet streets,” he said.

As far as the speed limit, the state of Nevada determines it, Downing said.

Most citizens think the current limit keeps things safe in Tonopah, he added.

“Most of the residents of Tonopah feel that the current speed limit is something that should stay the same due to the numerous crosswalks, which an increased speed limit on U.S. Highway 95 would make them much more dangerous to use.”

Downing also is chairman of the Town Board in Tonopah, the Nye County seat.