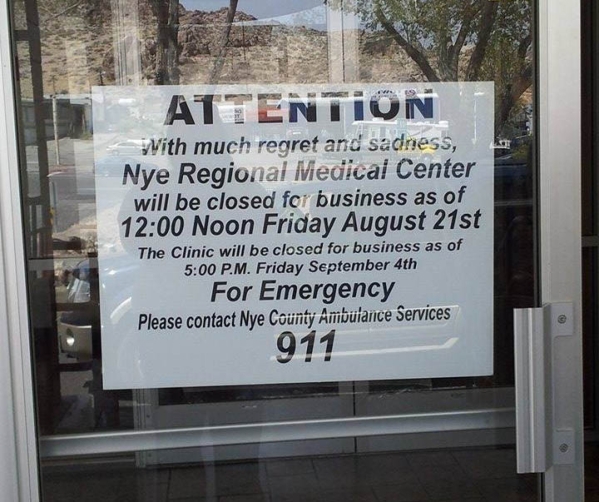 Tonopah is on track to get medical services to Nye Regional Medical Center by March 1.

A first draft of the professional agreement between Renown Medical Group and Northern Nye County Health Hospital District that was presented at the Nye County commissioners’ meeting on Tuesday has to be reviewed by Nye County District Attorney Angela Bello and Renown Health counsel.

“We have been bouncing a professional service agreement back and forth between the county manager, myself, Larry Trilops is the representative from Renown and our district attorney,” Nye County Commission Chairperson Lorinda Wichman said.

Nye County officials decided to further work on the agreement that stipulates rights and responsibilities of the district and Renown Medical Group to get the language worked out before calling a special meeting for final approval.

Bello said she had made changes to the document and forwarded them to the Renown Health counsel but didn’t hear back from him.

“I would like to discuss with our counselor and make sure it’s OK and there are a couple more changes that will probably occur before it’s finalized,” Bello said about the agreement. “I understand that you guys want this done asap, I can appreciate that, I know that people need it up there.”

In October 2015, Nye County commissioners accepted the preliminary proposal from Reno-based Renown Health, who stepped in after Nye Regional Medical Center closed its doors due to a grim financial situation.

Nevada’s only locally owned not-for-profit health care system, Renown Health came up with the proposal to provide a new healthcare model in Tonopah, whose residents now have to travel up to 100 miles to receive medical care.

“The plan is (to start providing services) before March 1,” Trilops said at the Tuesday meeting. “We’ve been talking about that since last fall that we wanted to get this going as soon as possible. I think we’ve hit some pickups and some bumps along the way. We worked through those and I think our team members are looking at telemedicine equipment and getting that installed today, so the plan is as soon as we get these agreements executed, we still don’t have a primary care provider, the plan is to accelerate urgent care services sooner in the near future but we are pushing ahead and I think we have to keep things moving.”

Previous operator Prime Care Nevada has approximately $1.2 million in unpaid liabilities. That does not include the $2.5 million and an unknown amount in legal fees the county loaned the hospital. Nye Regional closed its emergency services in late August, and the clinic closed Sept. 4.

Nye County Commission Chairperson Lorinda Wichman said that loan no longer exceeds $3 million by the county receiving all of the equipment and the agreement on the value of all that equipment being returned to the county, the debt has been reduced by $727,000.

Tonopah Town Board Chair Horace Carlyle resigned in the wake of his dispute questioning the legality of the Northern Nye County Hospital Taxing District, statements that angered some county officials.

In a letter submitted to the Nye County clerk on Dec. 24, 2015, Carlyle restated his concerns about the legitimacy of the Northern Nye County Health Hospital District that was established after Nye Regional Medical Center emerged from bankruptcy with debt exceeding $1 million.

“As a town board member, I voted town monies to help fund a taxing district that would support a hospital. I have since been advised that the Northern Nye County Hospital Taxing District, even though it was not formed consistent with NRC 450.710 through NRC 450.751 is legal, is not required to fund a hospital, and can negotiate a contract for medical services,” the letter read.

A notice of intent for a recall to remove Carlyle from the board was started on Dec. 8 by four Tonopah residents who called into question Carlyle’s motivations as the chair of the board.