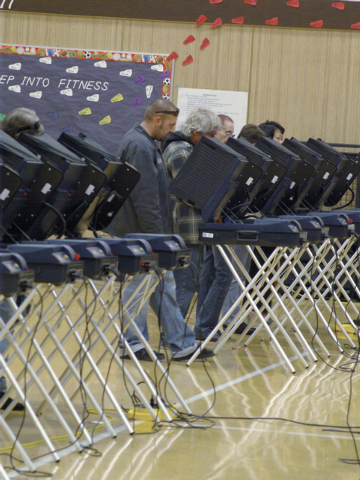 Merlino said she would have to submit a request to the Nevada Secretary of State to begin absentee balloting in those communities.

“We’re running out of time. I sent out almost an emergency request to the state,” she said.

The clerk’s office starts training election workers May 2, she said, adding if there is a whole new group of workers they would be uncomfortable running an election themselves.

In Round Mountain there are a lot of shift workers at the mine, Merlino said. There’s only one person available who’s worked an election before.

“People do it for some years and they get tired of it,” she said.

Voters throughout the county have the option of casting early votes in person at the Nye County courthouses in Tonopah and Pahrump, if they want to travel there.

Merlino told county commissioners, “I will be going forward and I have to put it on the agenda and I will be taking public comments. Hopefully the communities will be happy doing mail-in voting rather than traveling to towns 50 miles. It’s just that I’m down to the wire and I can’t find workers.”

“If I get approval I’ll go to it in November. If not, I will go back to election workers,” she said.