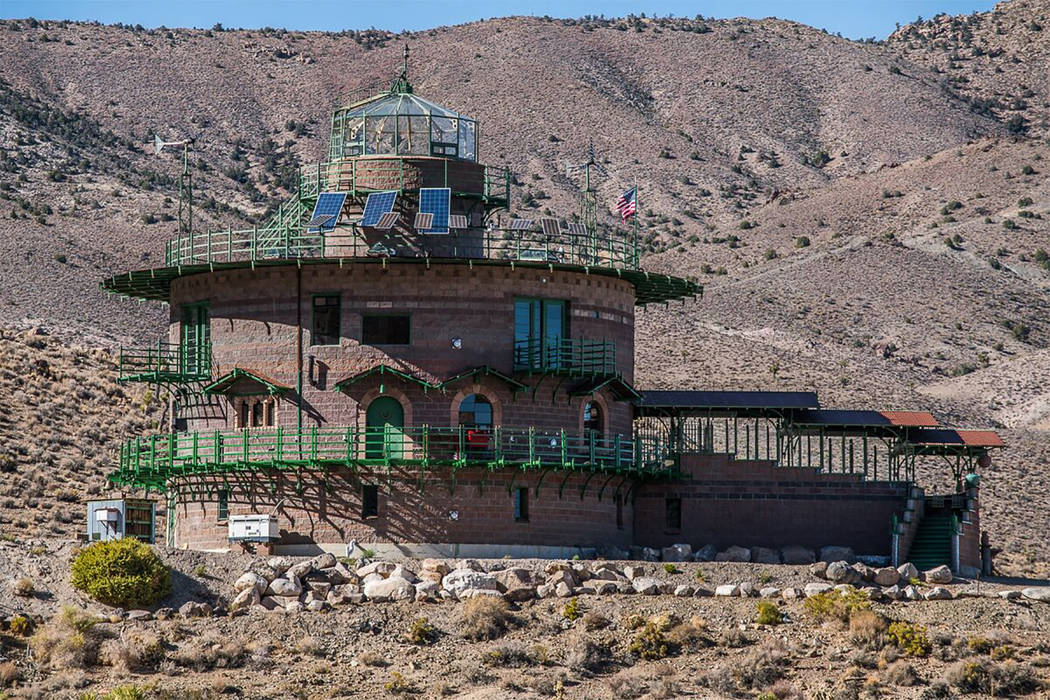 Special to the Pahrump Valley Times Hard Luck Castle is fortified four-story, 22 room, 8,000 square-foot home of Nevada resident Randy Johnston. The property sits on 40 acres of land off of Highway 267 roughly 35 miles south of Goldfield. The castle is now up for sale for an asking price of $900,000. 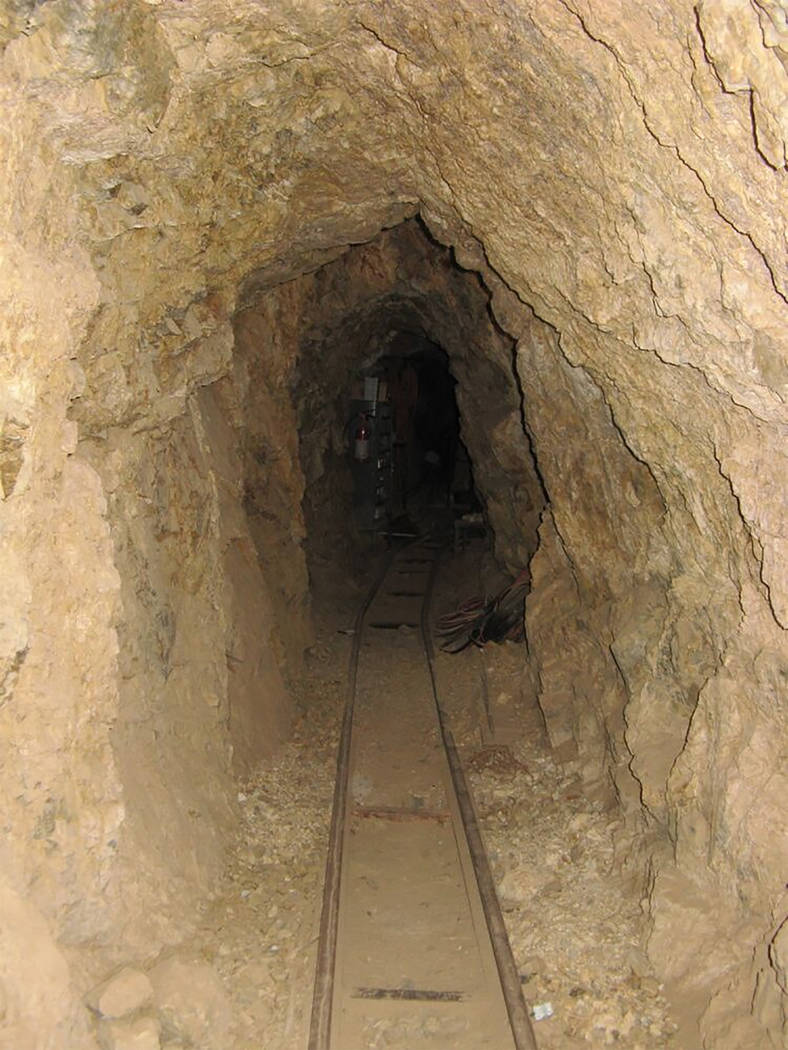 Special to the Pahrump Valley Times The Hard Luck Castle's gold mine has been closed since the beginning of World War II, it’s still high in gold content, according to realtor Jake Rasmuson. 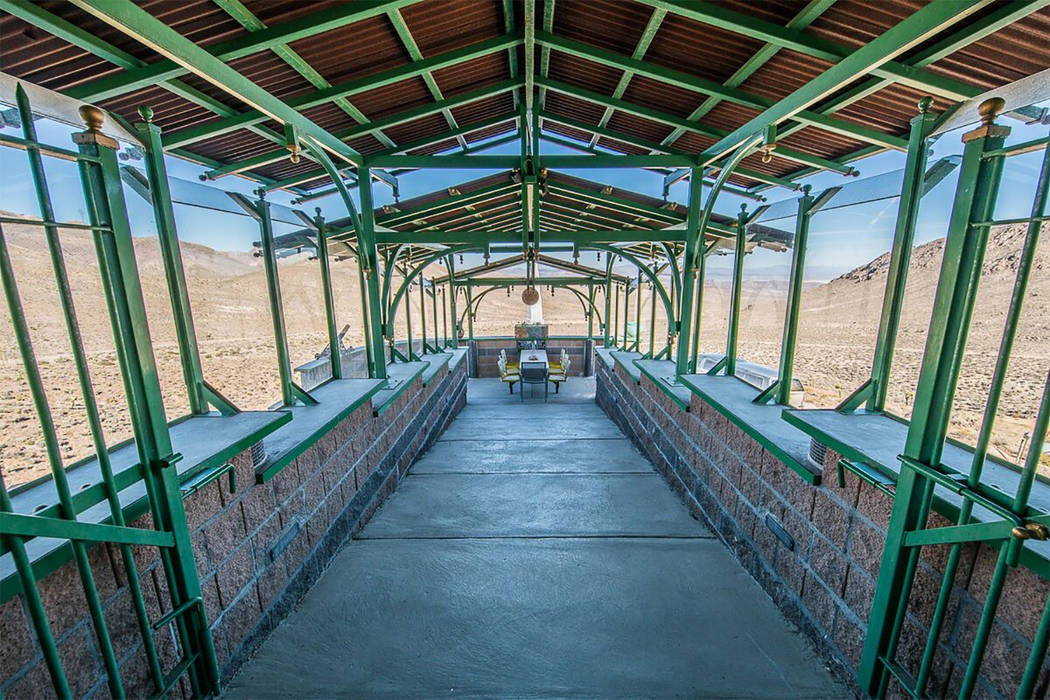 Special to the Pahrump Valley Times The castle at an elevation of 6,000 feet, also has a heated area encased in glass to provide views of the valley floor. The property sits atop of a location known as Gold Mountain. 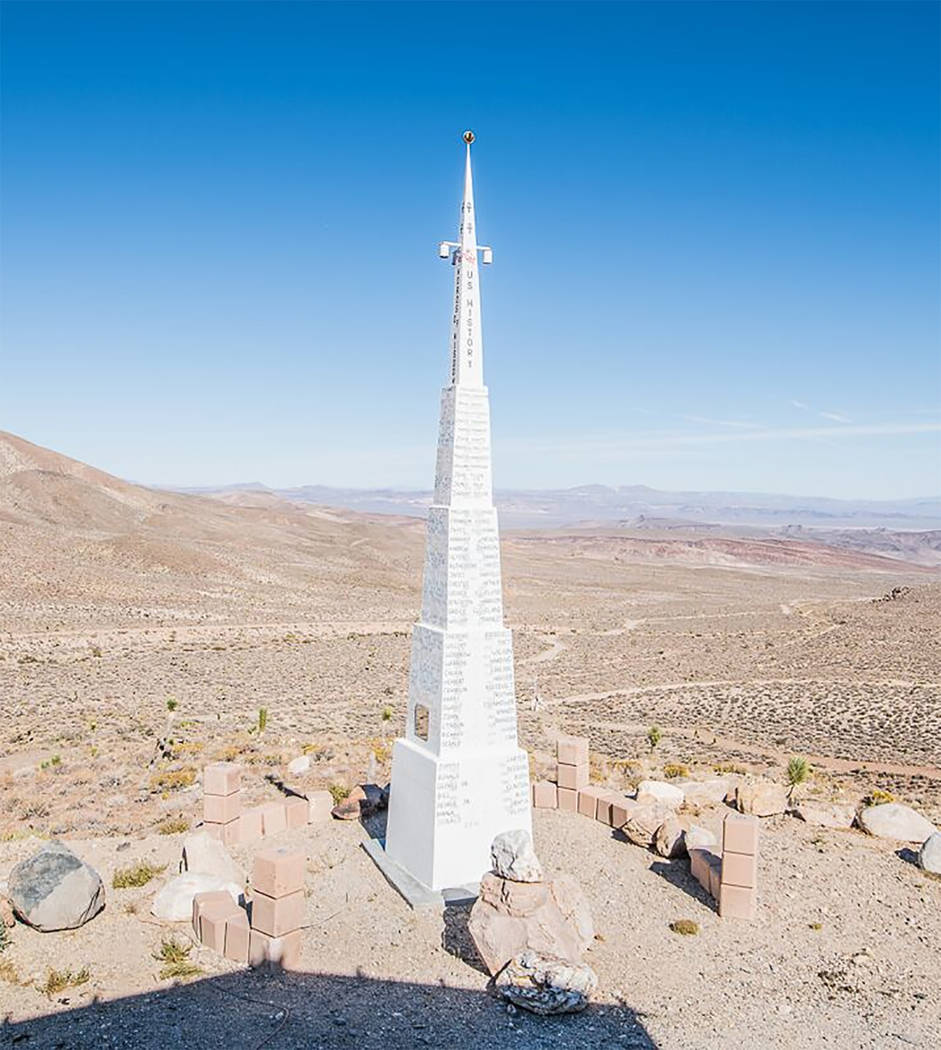 Special to the Pahrump Valley Times In the front of Hard Luck Castle stands a tall white compass displaying the names of each President of the United States in descending order. 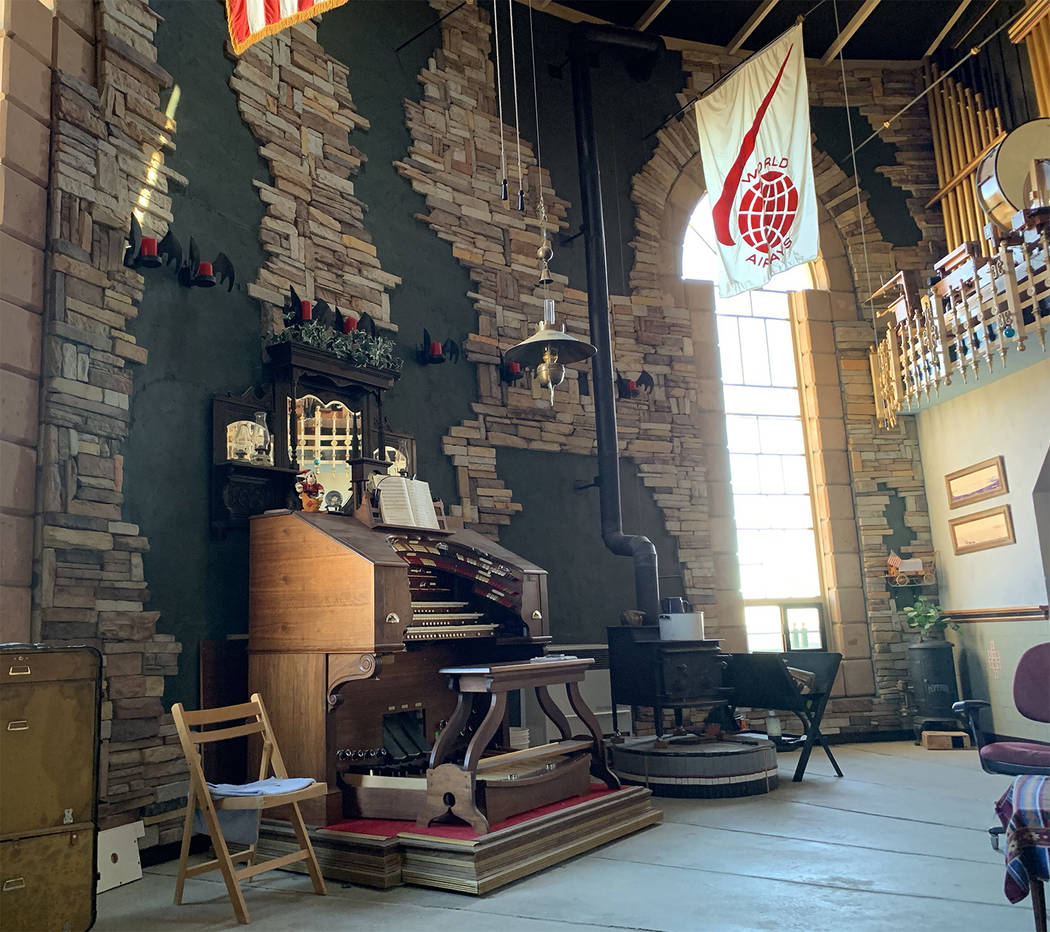 Special to the Pahrump Valley Times Two fully-functional 1920’s era pipe organs are one of the many amenities inside the property. The castle also has two kitchens, and four bathrooms along with a wood, metal and automobile shop, according to Realtor Jake Rasmuson. 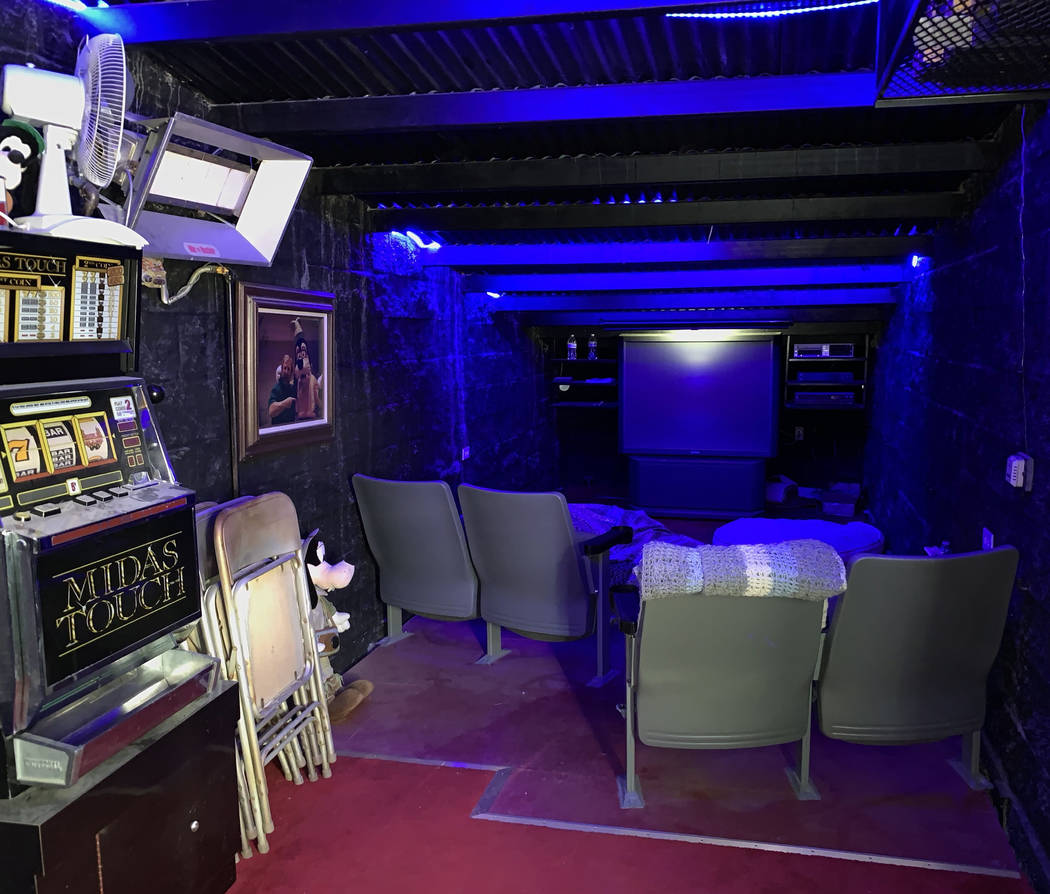 Special to the Pahrump Valley Times A screening and game room are yet another special feature of the 22 room Hard Luck Castle. Owner Randy Johnston said he's is open to any reasonable offers for the property.

There is now an opportunity for those who are financially able, to literally live like a king and it’s roughly a three-hour drive from Pahrump in the county of Esmeralda.

That person, with sufficient resources, could truly be considered the king, or queen of their castle.

Located in Nevada’s high desert sits what is called the “Hard Luck Castle.”

It also sits on 40 acres off Highway 267, roughly 35 miles south of Goldfield.

As rural as the location is, cell phone service is available in that area.

Long time in the making

Rasmuson said Johnston purchased the land and began building the castle back in 2000.

It took 12 years to complete the construction.

As far as amenities are concerned, Rasmuson said the castle is indeed fit for a king.

“It really has everything that you can want in a property up there,” he noted. “It has two kitchens, four bathrooms, and two fully-functional 1920’s era pipe organs inside. It also has a screening room and game room. It does have a separate wood, metal, and automotive shop. The woodshop is inside and the metal and auto shop are outside.”

Additionally, Rasmuson said the Hard Luck Castle is pretty much a self-sustained property.

“It is fully off the grid, so it has solar and wind power, along with two separate generators,” he professed. “One operates off of propane and the other operates off of diesel fuel. There is an attachment to collect rain, and there’s also a 4,000-gallon water storage tank. They do truck in water periodically from other locations, but as I mentioned, it does have a rain-catch facility as well. It is completely self-sustaining.”

It should also be noted that it’s no coincidence that the castle is located roughly 6,000 feet atop an area known as “Gold Mountain.”

“It also has a separate gold mine,” Rasmuson said. “The gold mine has been closed since the beginning of World War II and it’s still high in gold content. We do have information on that mine if someone is interested in learning more about it.”

Based on the hyper-sturdy construction, Rasmuson said Johnston, who actually built the castle himself, wanted to make sure the property would remain standing for centuries.

“That castle is expected to stand for at least 400 to 500 years,” he said. “All of the doors are made of steel so there’s not really any item there that could disintegrate over time. Mr. Johnston is a very, very intelligent individual. His desire to build this property was because of the building codes in Esmeralda County. They are very open, so he was able to build exactly what he wanted. Basically, it was Esmeralda County that drew him there, but he does travel down to Beatty and Pahrump quite often.”

Rasmuson also said that Johnston, who still occupies Hard Luck Castle, has actually lowered the price since the property went on the market last year.

“The price started at $1.2 million and now it’s down to $900,000,” he said. “Essentially, you could either purchase a small apartment in the city of San Francisco or purchase this huge castle in the Nevada desert sitting on 40 acres of land for pretty much the same price. $900,000 is an excellent price for that property. Per the owner, he has put over three million dollars into the property.”

Though coming up with $900,000 is a tall order for many people, Rasmuson said he’s received quite a few inquiries from prospective buyers.

He also noted that he can usually tell the difference between serious inquiries and curiosity seekers.

“Just recently, we have had a substantial amount of inquiries, and once it hit the national press, we really have had a lot of people looking,” he said. “We’ve also had several people who actually flew out to take a look at it. We have had interest in this property from people all over the world. We have had several articles throughout Europe and Asia. It’s such a unique property that it draws that kind of global interest. I’m able to say that I really see this property selling in the near future.”

In regard to the curiosity seekers, Rasmuson said Johnston regularly offers tours of Hard Luck Castle.

“Those tours are available and he does charge a small fee for those tours,” he said. “Those who are interested in touring the property can get his contact information via the website, which is hardluckcastle.com where they can coordinate a tour from there. Anybody who is looking to spend a nice afternoon in that area, it’s really worthwhile to go out and see Randy and take a tour. The pipe organs, when they are playing music out over the desert, there are absolutely amazing.”

In regard to potential buyers, Rasmuson said Johnston is open to any reasonable offers, negotiations and will carry with a substantial down payment.

“It would be great for somebody who is an artist, or musician because of the organs and especially anybody who wants some privacy out in the Nevada desert,” he said. “It does have a perch up top that is encased in glass. There’s a heater in there and water so you could really sit out underneath the Nevada sky at night and really take in all of the Milky Way that you can.