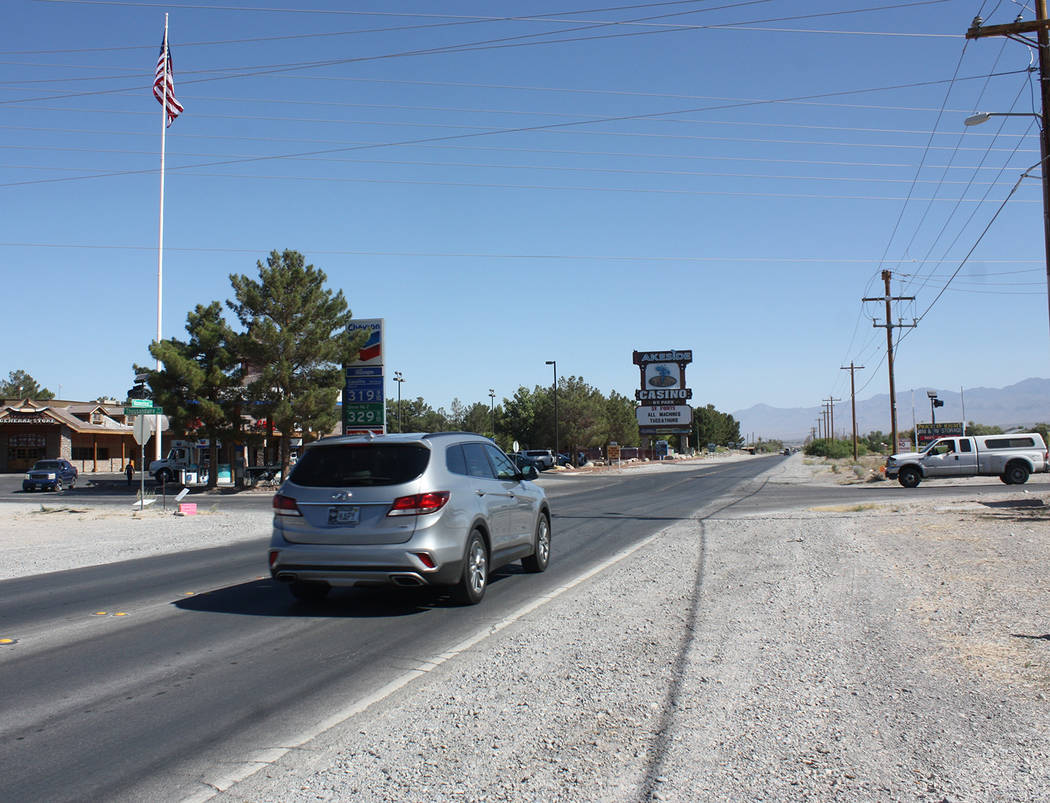 Robin Hebrock/Pahrump Valley Times Taken on Tuesday, June 26, this photo shows the intersection on Homestead Road and Thousandaire Boulevard where road crews will soon be undertaking a $1 million construction project. 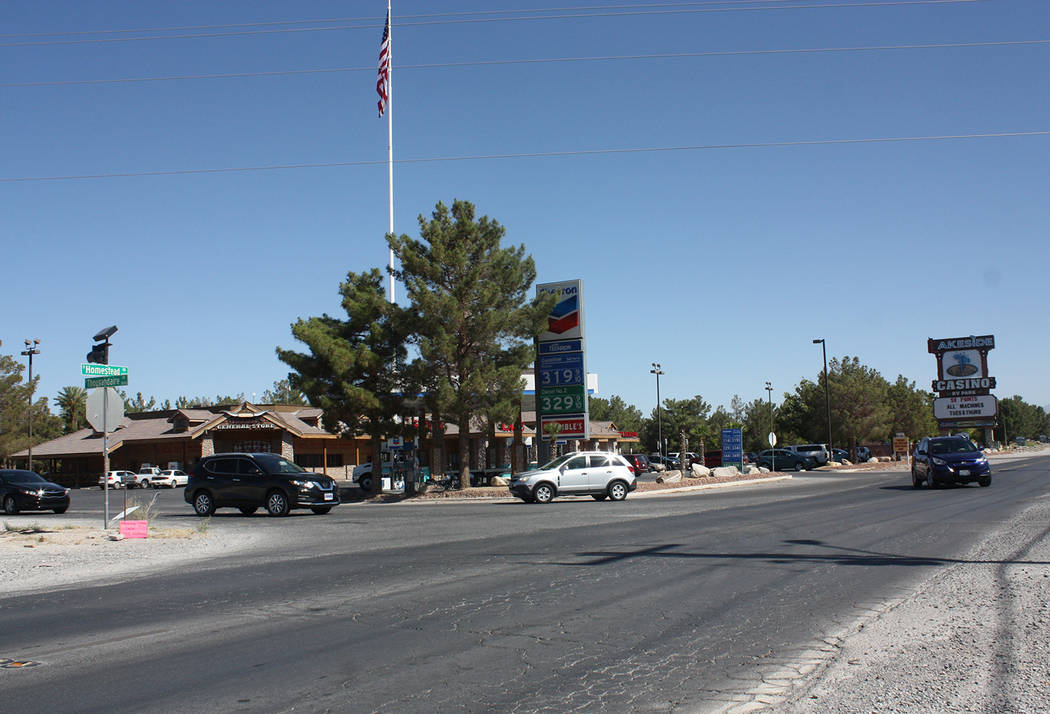 Robin Hebrock/Pahrump Valley Times The highly-traveled intersection of Homestead Road and Thousandaire Boulevard, shown, will soon be the subject of a cone zone. The county recently authorized a rebuild of Homestead Road from Manse Road to Thousandaire, the continuation of upgrades started in November, 2017. 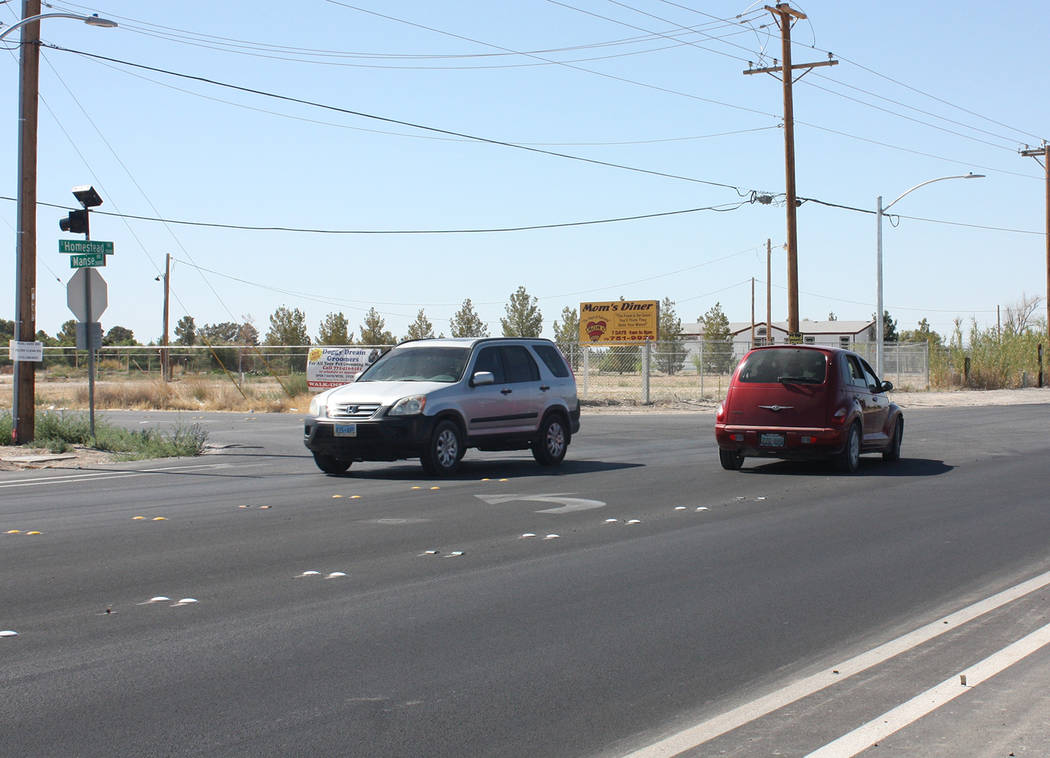 Robin Hebrock/Pahrump Valley Times The last phase of construction on Homestead Road ended at the intersection of Manse Road, pictured here. The next phase will address approximately 1.22 miles of roadway south of that intersection. 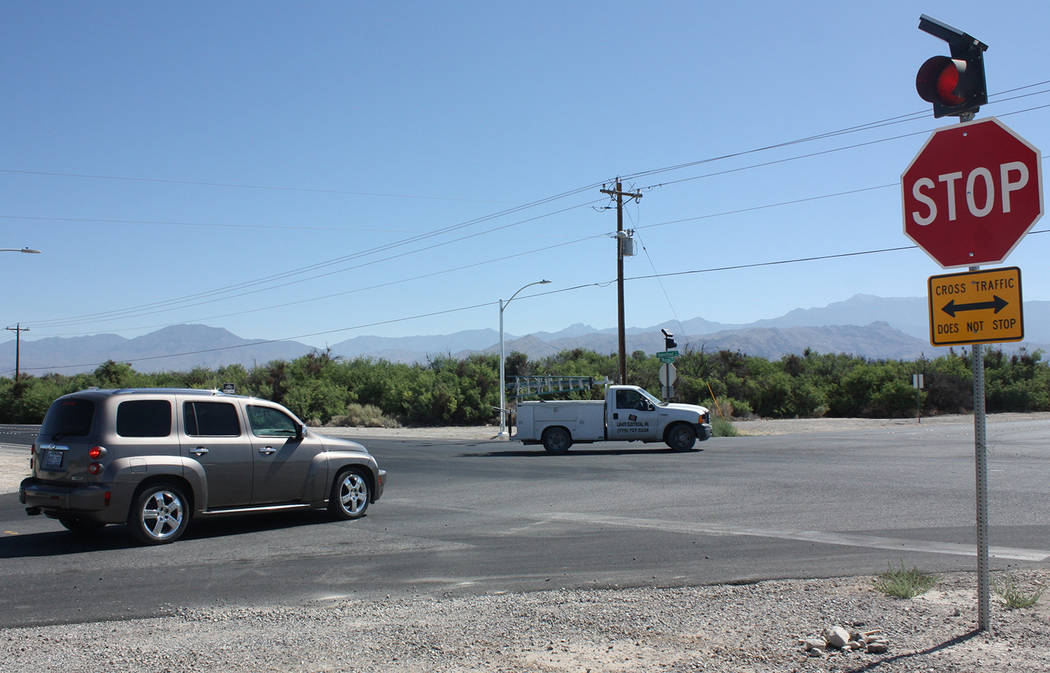 Robin Hebrock/Pahrump Valley Times Another view from the corner of Manse Road and Homestead Road, where coming roadwork will once again effect motorists traveling in the area. Drivers are asked to exercise caution and patience when construction begins.

One of the most frequently traveled thoroughfares in the Pahrump Valley, Homestead Road, is set to see further improvements after the Nye County Commission awarded the contract for a $1 million rebuild project earlier this month.

The next phase of upgrades targets an approximately 1.22 mile stretch of Homestead Road between Manse Road and Thousandaire Boulevard, on the southern side of the valley. This is a continuation of the improvements started in November 2017 which addressed Homestead between Gamebird and Manse roads.

The Regional Transportation Commission gave the thumbs up for just under $858,000 in funding for the next stint of improvements, with the remaining $194,000 to be paid for out of the Nye County Road Department fund. The total cost to the county is $1,052,715.49.

“This next section will be similar to the upper section, in that we will be excavating material, importing material and widening the roadway five feet on both sides and paving the surface,” Nye County Public Works Director Tim Dahl explained. “The striping will be for two moving lanes, one in each direction, and bike lanes on both sides for a total new width of 38 feet of pavement. The old surface is approximately 22 feet wide.”

Dahl said the county is anticipating Wulfenstein Construction will begin work on the roadway in the near future.

“The contract is in the process of being signed by the contractor and the county,” Dahl stated. “Once the contract and bonding information are provided, we will initiate a notice to proceed to the contractor, giving them 10 working days to start the project. The project is slated to last 60 business days and yes, it will entail some patience from the public to help keep a safe workplace by adhering to traffic controls throughout the project.” Dahl noted that the county has already scheduled a pre-construction meeting with Wulfenstein Construction, which is set for tomorrow, June 28.

“I am excited to see this next phase of improvements to Homestead Road,” Dahl added in conclusion.

In addition to Wulfenstein Construction, there were two other bidders for the Manse to Thousandaire project, including Las Vegas Paving and Aggregate Industries. There were two separate portions of each bid, detailing proposed costs for the first 5,230 linear feet, about 0.99 miles, as well as an optional item addressing an extra 1,190 linear feet, or roughly 0.23 miles.

“I have pushed during meetings of the Regional Transportation Commission for this to get accomplished,” Nye County Commission Chair and Regional Transportation Commission member John Koenig stated when reached for comment. “I often wonder why previous boards did not include this when the other portion of the road was done. In my mind, doing it then would have saved money, this is a road many tourists use when visiting Pahrump and should have been done before. I am very pleased that this is finally moving forward.”