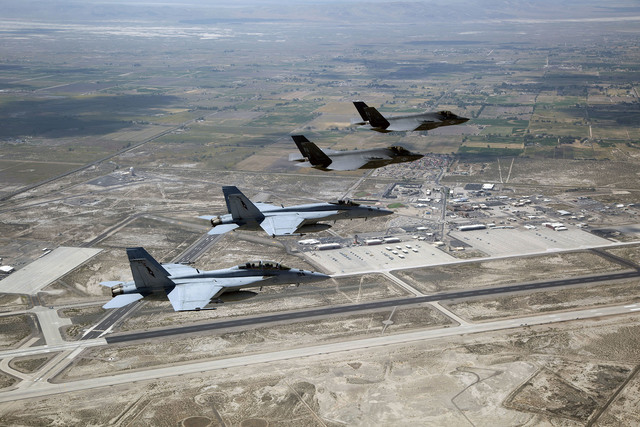 A proposed expansion by the Navy of the Fallon Range Training Complex totals more than 600,000 acres of additional public land, including in Nye County. The Fallon Range Training Complex in the high desert of northern Nevada, approximately 65 miles east of Reno, is a set of well defined geographic areas encompassing a land area and multiple air spaces, the Navy says on one of its websites. Courtesy of the Naval Air Station Fallon 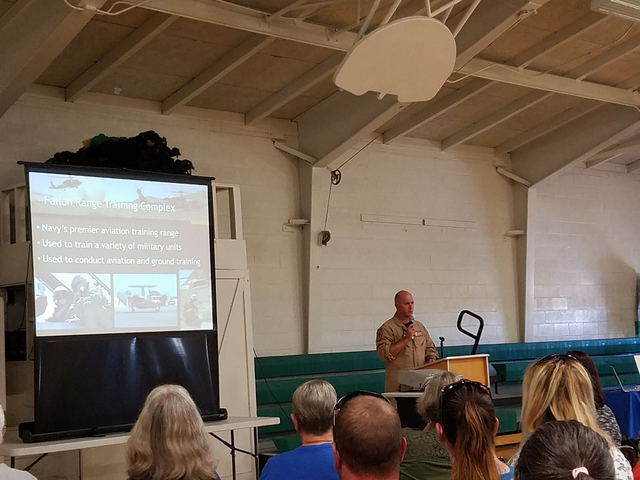 Capt. David Halloran, commanding officer of Naval Air Station Fallon, speaks to a crowd in Gabbs on Oct. 7. A public meeting was held there on the proposed expansion of the Navy's Fallon Range Training Complex, which would include Nye County. David Jacobs/Times-Bonanza & Goldfield News

A Navy proposal that would nearly triple the Fallon Range Training Complex’s size includes land in Nye County where ranching concerns are being raised.

The Navy seeks to renew its existing arrangement for 202,859 acres in addition to seeking for military use another 604,789 acres of public land to expand the current range. The Navy also wants to acquire another 65,160 acres of non-federal land.

Before a decision is made, an environmental study is planned in addition to seven public hearings. One of the first included a hearing Oct. 7 in the Gabbs school gymnasium.

Appearing before a crowd of at least 75, the commanding officer of Naval Air Station Fallon outlined the Navy’s proposed massive expansion of the Fallon Range Training Complex, growth that would extend into Nye County as part of the military’s aim to modernize.

“The Navy has looked at our training requirements and realized that we have outgrown the limits of our current construct at the Fallon range training complex,” Capt. David Halloran told audience members in Gabbs. “The bottom line is we don’t have enough room to actually operate in training the way that we have to train in combat.

“My job is to make sure that naval aviators, when they go on deployment and go into combat, have seen the real-world type of activity that will happen when they are in combat.”

The Navy is looking to make sure that when the U.S. “fights a near-peer competitor” the American “aviators have the best chance possible to be able to handle that threat and return back home,” Halloran said.

Besides Halloran’s presentation, the event featured informal one-on-one questions and answers with Navy representatives who brought poster-like displays of the plans. Also available were videos and a court reporter who collected individual concerns or observations from residents.

“Based on the environmental analysis, the Secretary of the Interior will make a recommendation to Congress” on the proposal, the BLM said in a statement. “However, Congress, not the Secretary, will make the final decision on both the requested extension (renewal) and proposed expansion.”

The Navy’s authorization to use its existing acreage expires in 2021, the BLM said.

The Fallon site is about 65 miles east of Reno, but officials in Tonopah said the proposed expansion would include a portion of Nye County.

Harry Brown, whose ranch and permit has been in his family four generations, is expressing concerns about the Navy’s proposal.

“The way I understand it, they’re going to completely annex it or something like that, and they’ll just take the ranchers’ grazing permit, and they’ll just kick you off, and that’s the end of it,” Brown said in detailing his concerns.

“It’s ‘a taking’ is what it is in my opinion when the government takes something from you and doesn’t give you any compensation,” added Brown, who ranches in Nye and Lander counties and whose winter range is near Gabbs.

“If we lose our winter permit, we are pretty much put out of businesses,” he said of the area that includes hills near Gabbs. “With no compensation, we can’t go anyplace and buy another ranch or another grazing permit because they’re not going to give us enough money to do it.”

Brown, with ranching locations in Gabbs and Smith Creek Valley between Austin and Fallon, plans to attend two or three public hearings to get answers.

Brown, whose family ranch includes 300 head of cows, indicated he’s had trouble making contact with the Navy to get his concerns addressed.

“All they do is send you out a card that tells you when the meetings are and stuff. The only way I found out anything was by talking to our BLM range (official). She told me what the whole plan was, but nobody else would tell me nothing until I talked to her.”

Brown said his neighbors have similar concerns about the proposed expansion.

Brown also is involved with Bighorn Sheep Unlimited, a group with a focus that includes habitat conservation.

“We have quite a few mountain sheep that are watering on our spring,” Brown said of his family’s ranch land. “If they (military) decide to make a bombing range out of it, what’s going to happen to all of those sheep? Are they going to kill them or what?”

In its statement, the BLM said that the Navy would consider existing uses of the lands.

“For instance, the Bureau of Reclamation and the U.S. Fish and Wildlife Service manage some of the lands. In addition, the Pony Express National Historic Trail, managed by the BLM and the National Park Service, runs through both the existing and proposed expansion areas.”

Current authorized uses of the lands can continue while the Navy’s proposal is considered, the BLM said.

■ The Fallon Range Training Complex is in the high desert of northern Nevada approximately 65 miles east of Reno.

■ The complex is a set of well-defined geographic areas encompassing a land area and multiple air spaces.

■ It is used primarily for training operations, with some capability to support research and development and test and evaluation of military hardware, personnel, tactics, munitions, explosives and electronic combat.