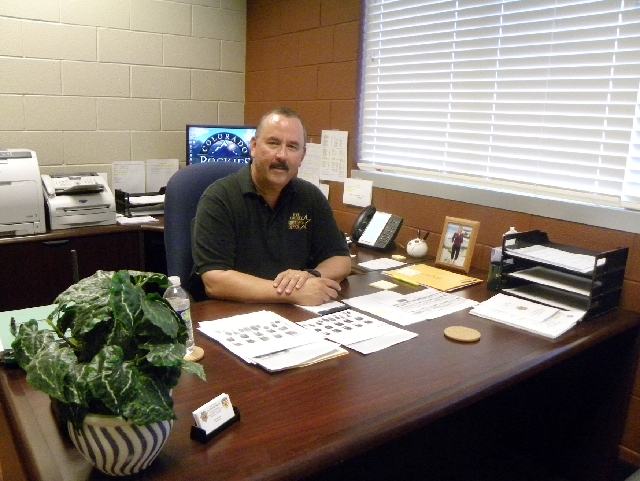 A local Nye County Sheriff’s sergeant was recently promoted to lieutenant after being tasked with taking over management of the new county jail.

Lt. Mark Medina, an almost 18-year veteran of the sheriff’s office, was promoted to his new position in early May after he said he was asked by the sheriff and assistant sheriff to take over command of the detention facility following the resignation of former NCSO Lt. Jack Hennigan.

Medina, who has worked as an internal affairs and background investigator for the last four years, said he was taken by complete surprise when he was offered the position.

“They sprung it on me, I never saw it coming,” he said. “I was working in my office in internal affairs and Assistant Sheriff Rick Marshall called me to his office and 10 minutes later I was a lieutenant. That’s pretty much how it happened.”

In his new capacity, Medina said he is now responsible for almost every facet of the detention facility, including managing his staff, managing inmate needs and even managing vendor relationships with the jail.

“I have to manage the new jail, and that includes managing the staff — the sergeants, detention deputies and jail techs, and all of the vendors who sell us things like food and other things and the budgets,” he said. “And then I have to keep track of all of the needs of the inmates. We have lots of inmates on a regular basis and they have medical needs, certain food needs if they’re diabetic, they might be on suicide watch, there’s lots of needs the inmates have that I have to keep track of and make sure their rights are being adhered to and their needs are being met.”

Though he now has a new set of responsibilities and a new office inside the jail, Medina said he will continue to work in internal affairs until the administration restructures the position and finds someone to fill his spot.

“It’s just a matter of prioritizing what needs to be done and managing your time well,” he said.

Throughout his career as a member of the Nye County Sheriff’s Office, Medina has served as a patrol deputy, sergeant and internal affairs investigator.

“I was in internal affairs for a while, went to patrol and then came back to internal affairs. I’ve been a sergeant for about 10 years now before I made lieutenant. And before that I was a patrol deputy,” he said.

Though he never served much time in the county’s detention facilities before, Medina said he has experience working in jails in other jurisdictions from his time in law enforcement with two agencies in California.

Medina said so far he has been enjoying his new position in the detention facility and the challenges it has brought him.

The lieutenant added working with the staff in the jail has made his job easier and more enjoyable as well.

“I love the challenge in here. It’s very busy and has some stress to it, but it’s exciting. You know you try to do one thing and then you have 10 other things you have to do in the next hour and then you return to it. But every day is a new day,” he said. “I also have a top-notch staff… And I try to my best to make their jobs easier. Usually if it is within reason and within policy and within the law, I try to give them whatever they need and whatever they want to make their job easier. I’m not a restrictive boss by any means. If they’re happy, I’m happy.”

The most challenging aspect of the job so far, the lieutenant said, is making sure every inmate has their needs met, whether they be dietary, civil or medical.

“Trying to keep up with the inmates’ needs and the staffing levels to keep up with those needs (has been the most challenging),” he said. “We have so many people and when someone has to go to the doctor for one thing or another or they have a medical emergency, we have to see to those needs and sometimes that requires that we have to transport them to doctor’s offices or hospitals and if I have to send a deputy to the doctor’s office with an inmate for two or three hours, then I’m short a deputy for that period of time. So that’s the most challenging part so far. That and keeping the overtime budget as low and as minimal as possible, that’s my other challenge.”

Though taking on his new position has increased the lieutenant’s time at work and the number of tasks he has to complete, when he’s finally able to get away from the office Medina said he enjoys spending time with his family and traveling to watch the Colorado Rockies play ball.

“My wife and I are big Colorado Rockies baseball fans. We go to Denver pretty frequently to go to baseball games. As much as my wife and the sheriff’s office will let me, I like to go back and forth to Denver to watch the baseball games,” he said. “I think with this new position those trips will become more limited, but that’s what we like to do. That and we have an RV we like to travel here, there and everywhere in too.”

As he settles into his new managerial position in the jail, Medina said the first goal he would like to accomplish is guiding his staff of detention sergeants, deputies and technicians to run the facility in the most efficient and streamlined manner possible.

“I want to demonstrate to the administration I can get this jail running effectively and efficiently and I think that’s why they put me in here, so that’s my goal,” he said. “It’s a lot fun and a lot of work, it’s very challenging and I plan to do the best job I can.”