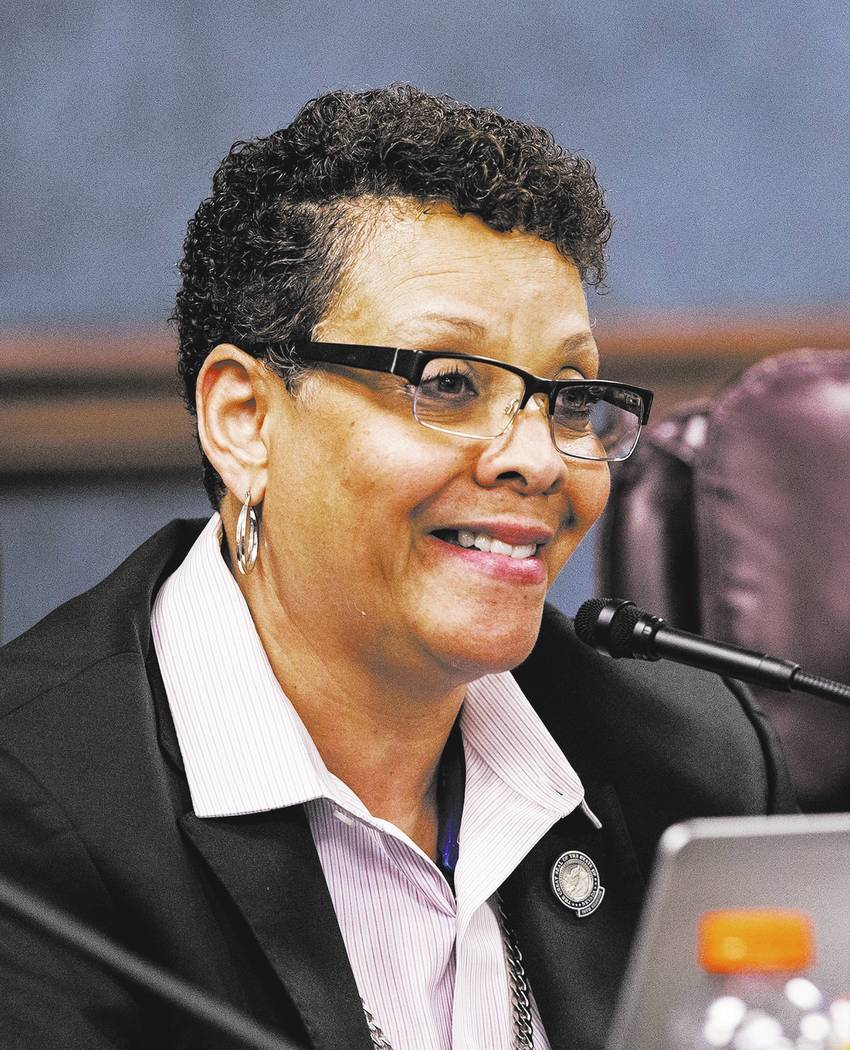 Benjamin Hager/Las Vegas Review-Journal State Sen. Pat Spearman speaks with a reporter as shown in a 2017 photo. Spearman said that President Donald Trump’s impeachment would be a plank in her platform as a candidate for Congress.

State Sen. Pat Spearman, a North Las Vegas Democratic candidate for Congress, said that Democrats will take the majority in the U.S. House of Representatives in the 2018 election and would begin proceedings to impeach Donald Trump as president.

“So far there are already several reasons for articles of impeachment, drawn up in Congress, the least of which is not the Emoluments Clause,” Spearman said on Nevada Newsmakers, referring to a little-known rule that prohibits Trump’s businesses from accepting payments from foreign governments.

“Once we take the House,” impeachment should proceed, she said, “if there is clear and compelling evidence and there already is.”

Impeachment proceedings begin in the U.S. House, according to federal law, and Democrats would likely need to regain the majority for the impeachment to get rolling.

The Democrats would need to hold the seats they already have in the U.S. House and capture 24 more in the November election to earn a majority, according to various projections. Already, 31 GOP members of the U.S. House have said they will not seek re-election.

“There are so many (reasons for impeachment), people have stopped naming them,” Spearman said. “But there is already clear and compelling evidence that says he has, in so many ways, already violated the office.”

Spearman said Trump’s impeachment would be a plank in her platform as a candidate in Nevada’s 4th U.S. House District, which includes North Las Vegas and a large section of rural Nevada, including Nye County.

“Let me put it like this: If it walks like a duck and talks like a duck — and I understand that I am probably speaking disparagingly about ducks, then, yes,” she said. “If there is clear and compelling evidence, of which there already is, yes (it will be part of my platform).”

“When I get to Washington, I don’t plan on being part of that enablers’ group,” she said.

Spearman also spoke in support of Rep. Maxine Waters, D-California, who said Trump should be impeached after his recent derogatory comments about people from Haiti, El Salvador and some nations in Africa.

Pence, war, Medicare for all

Spearman has also be critical of the man who would become president if Trump’s impeachment were finalized by a trial in the U.S. Senate — Vice President Mike Pence.

Spearman was critical of Pence’s record on LGBTQ rights during a speech at the 2016 Democratic National Convention, saying Pence “used religion as a weapon to discriminate.”

Spearman said on Nevada Newsmakers her view on Pence has not changed.

“If Mr. Trump is impeached and Mike Pence becomes president, that doesn’t change anything. Until he changes his stance, I will still be critical,” she said.

A retired lieutenant colonel in the Army, Spearman threw down a strong challenge to those in Congress who call for war to settle the nation’s international issues.

“I will say this for all of those people who are calling for, ‘Let’s go to war’ and they’ve never been. My question would be: Are you willing to go first? If you are not willing to go first, then I don’t believe you when you say we’ve got to go to war.”

“I believe it is possible to get affordable Medicare, Medicaid for all,” she said. “If other counties have done it, then we’re smart enough to figure out how to do it as well.”