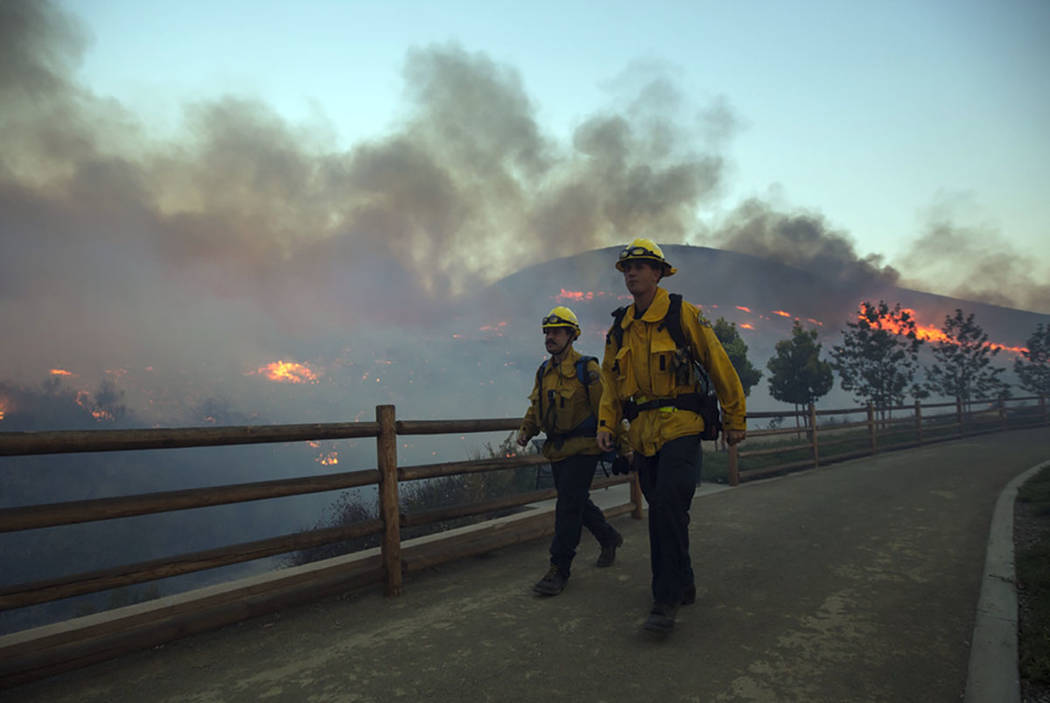 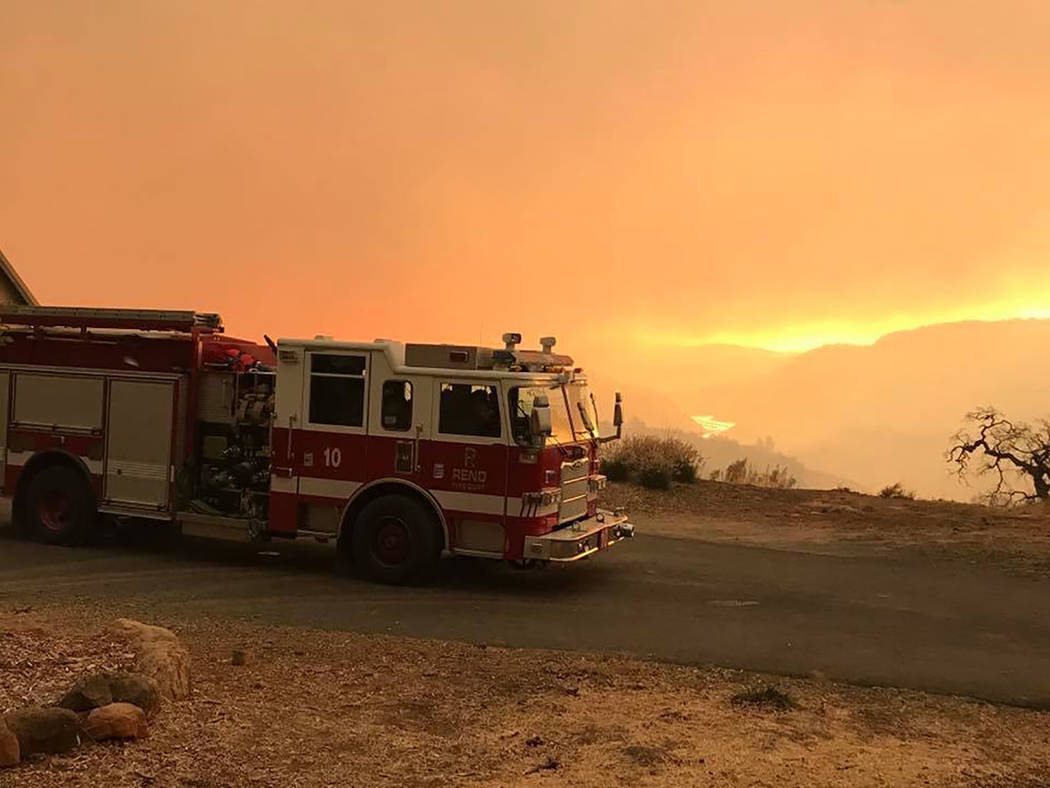 Photo courtesy Reno Firefighters Association Engine 10 of the Reno Fire Department is shown at the Camp Fire in the Paradise, California area on Nov. 9. Reno fire crews, along with those from Sparks and the Nevada Division of Forestry, are among those on thescene. 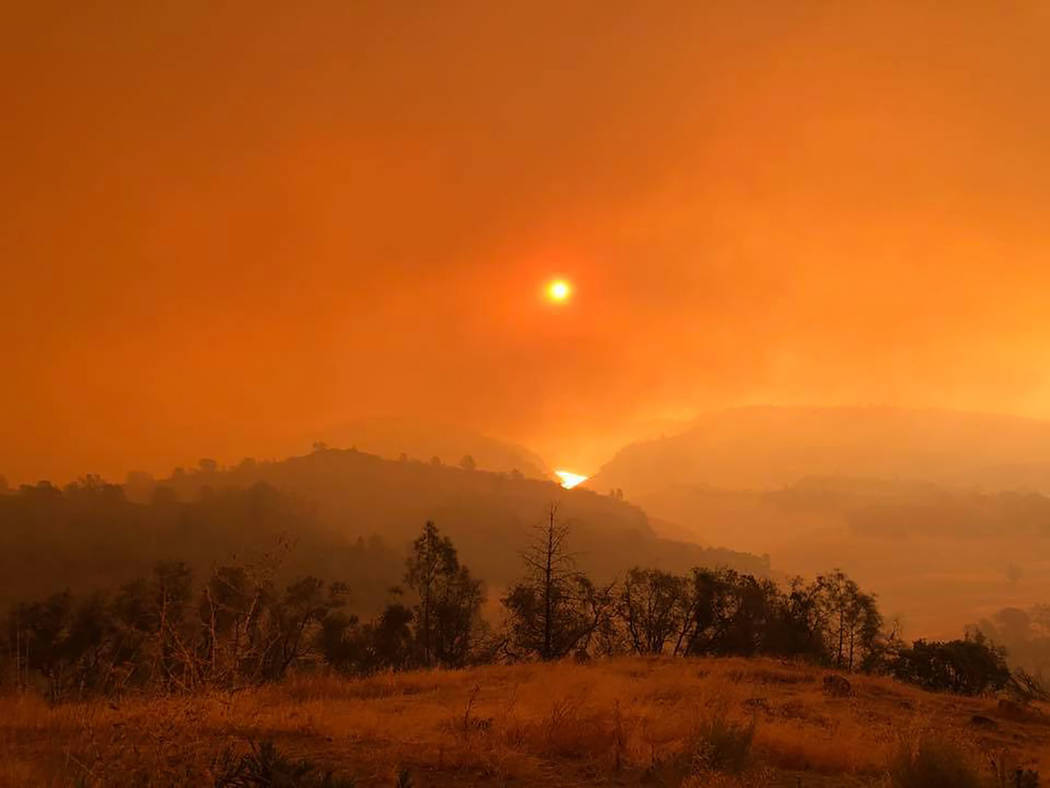 Photo courtesy Reno Firefighters Association A look at the scene on Nov. 9 in the Paradise, California area as shown in a photo taken that day. Reno firefighters are among crews from Nevada working the fire.

As wildfires destroy towns and force evacuations in Northern and Southern California, government agencies in Nevada have sent fire equipment and personnel to help.

As of the start of this week, at least 42 people had died from the fire and at least 200 were missing from the areas of the fires that include the Camp Fire outside of Paradise, California.

#NV has sent resources to help fight the #CA wildfires. We are praying for all those affected and for the safety of all the first responders.

“We are praying for all those affected and for the safety of all the first responders,” said Sandoval, R-Reno, in announcing assistance.

Nevada resources include crews and fire trucks from both Reno and Sparks and two Nevada Division of Forestry strike teams.

The Southern Nevada office of Bureau of Land Management sent a fire engine and other officials to help with the blazes, said Zachary Ellinger, a fire mitigation and education specialist for the agency.

The vehicle is one of the bureau’s “bigger wildland engines” and is fully staffed, along with a strike team leader and public information officer to assist California crews, he said.

“It’ll have highly experienced leaders on board,” Ellinger said. “I anticipate they’ll be doing some structure protection.”

The Red Cross also will send a Nevada official to California, Cynthia De La Torre, spokeswoman for the Southern Nevada chapter of the relief organization, said. The Red Cross is sending a volunteer disaster mental health chief from its Reno chapter to Sacramento, about 90 miles south of Paradise, which has been almost completely destroyed by fire.

Ellinger said the BLM’s crews often find themselves in California.

“They have a year-round fire season in California now,” he said.

The Pahrump Valley and Las Vegas fire departments have not deployed resources to the California fires. The departments in Northern Nevada are typically more equipped to handle forest fires because of the area’s geography, Las Vegas Fire Department spokesman Tim Szymanski said.

Since Thursday, the Reno Fire Department has sent crews to both the Northern and Southern California fires, fire chief Robert Casos said.

The department has sent two staffed engines with a battalion chief to the northern blaze, and another engine to the southern fire. A line safety officer to monitor crews’ safety also was dispatched to Southern California, Casos said.

“As soon as the requests came in they started sending the apparatuses out,” Casos said.

Both the Reno Fire Department and the BLM will typically have crews in California for up to two weeks, but they could stay for three weeks or longer depending on the need.

Casos said the Reno department won’t be able to send any additional engines because it must ensure it’s covered in case a fire breaks out in Northern Nevada.

“It’s entirely possible that we could have a similar problem here,” he said.

“The fires in California are year-round, so our guys have been called out the past couple of years during the holidays,” Casos said.

The Pahrump Valley Times checked with the National Weather Service, which says haze in Nye County was from the deadly Camp Fire. The haze, which was mainly south of U.S. Highway 95 on Saturday, was expected to clear out by early Sunday. The haze, however, could return later this week, depending on fire behavior, the weather said.

— The Pahrump Valley Times staff contributed to this story.