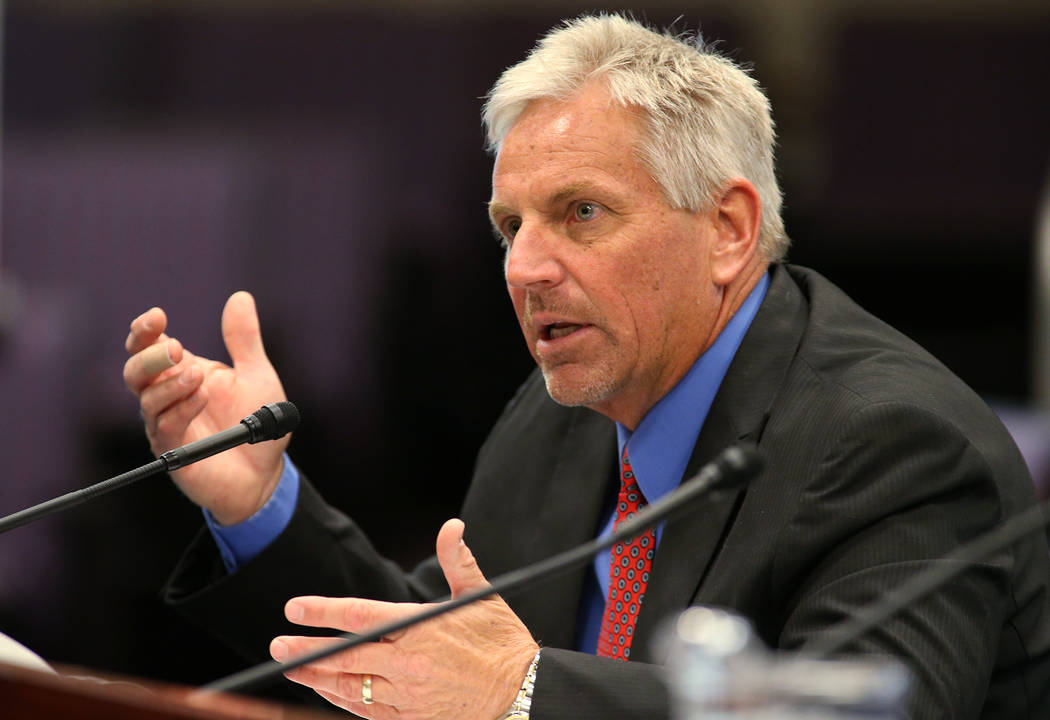 Special to the Pahrump Valley Times - Nevada State Engineer Jason King issued an amendment to Order #1293 on July 12. The order restricts the drilling of new domestic wells in Pahrump, with the amendment allowing for specific exceptions. 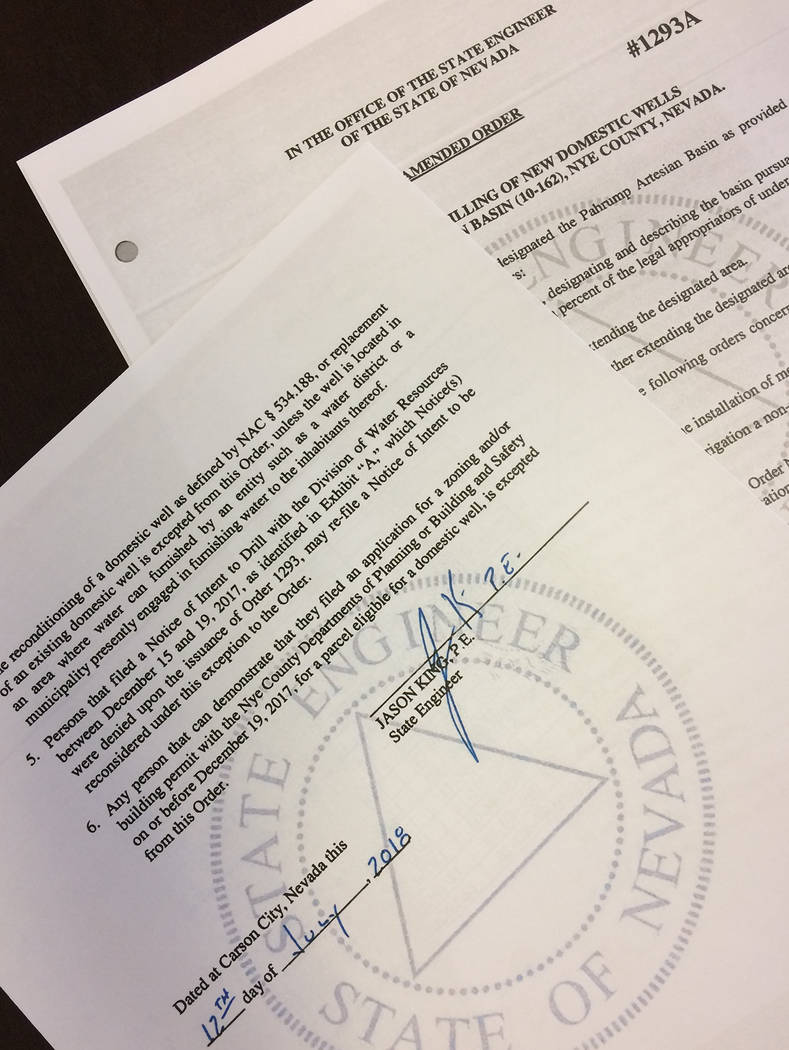 Robin Hebrock/Pahrump Valley Times Order #1293A was signed off earlier this month. The order as originally issued restricts the drilling of new domestic wells in Pahrump. The amended version now allows for specific exceptions to the order. 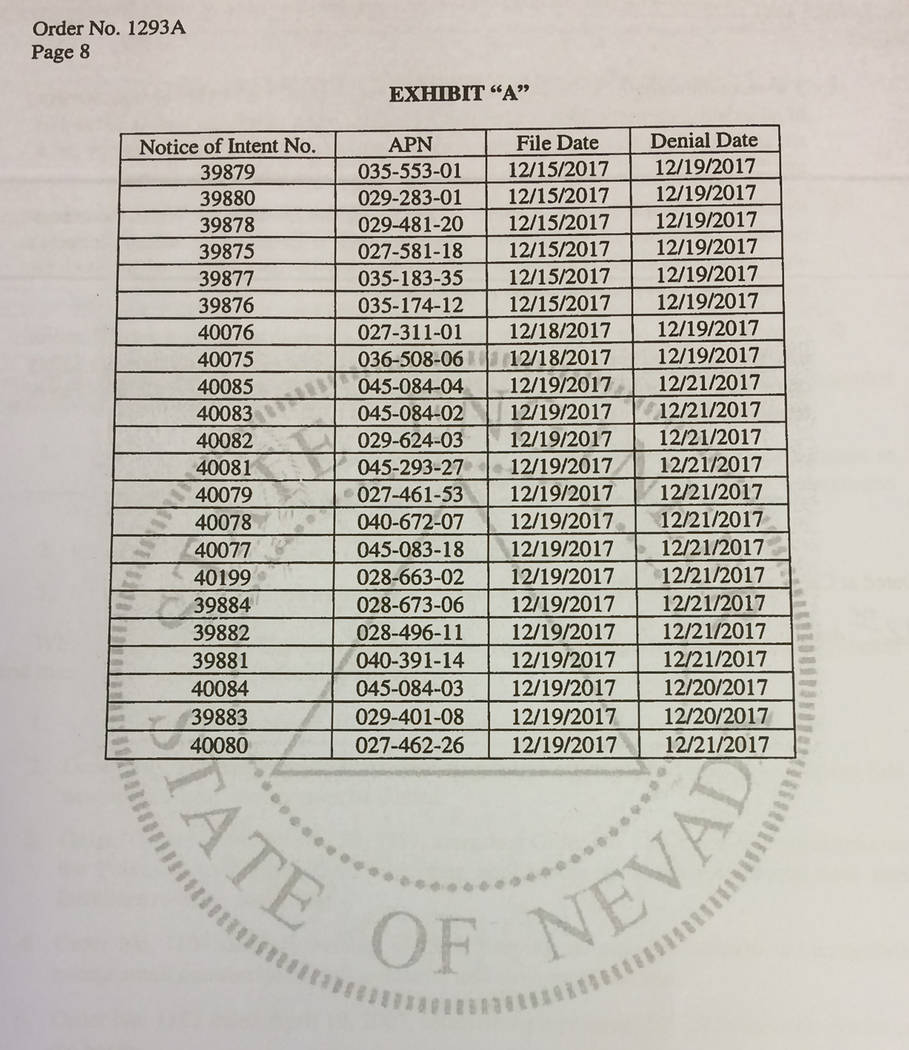 Robin Hebrock/Pahrump Valley Times There are 22 properties listed in Exhibit A of Order #1293A, just some of the parcels that are effected by the amended order.

The battle over Nevada State Engineer Order #1293 is still being waged in the court system and awaiting definitive resolution but certain Pahrump Valley property owners are now getting some relief from the restrictions laid down by that order. Those involved in the situation are hailing the amendment as a good-faith move forward in resolving the contention surrounding the subject.

On July 12, Nevada State Engineer Jason King signed off on Order #1293A, which altered the original order by allowing those Pahrump property owners who had already filed an intent to drill card prior to the issuance of the order to proceed with domestic well construction without the need for two acre-feet of water rights relinquishment. The amendment also permits those who can show proof of their readiness to build prior to the issuance of the original order to drill without relinquishment.

“Persons that filed a Notice of Intent to Drill with the Division of Water Resources between December 15 and 19, 2017, as identified in Exhibit ‘A,’ which notices were denied upon issuance of Order #1293, may refile a Notice of Intent to be reconsidered under this exception to the Order,” the amended document reads. “Any person that can demonstrate that they filed an application for a zoning and/or building permit with the Nye County Department of Planning or Building and Safety on or before December 19, 2017, for a parcel eligible for a domestic well, is excepted from this Order.”

Order #1293 was issued late last year after the Nye County Water District Governing Board approved and sent a letter to King requesting such an action. With water concerns a hot-button topic, it was proposed that limiting the drilling of new domestic wells or offsetting such drilling in relation to the basin’s water budget would be prudent. One way to do so would be to require all new domestic wells to have water rights relinquished in favor of the well prior to drilling, the water district proposed.

Apparently, King agreed with the concept and just a few short days after receiving the letter, he complied with the request and issued the Order #1293. This resulted in widespread turbulence in the community and drew almost immediate push-back from critics of the move. Several locals, including real estate agents and well drillers, formed Pahrump Fair Water LLC, which filed a lawsuit in an effort to halt the order and have it overturned.

The lawsuit is currently immersed in the judicial process and is currently set to be heard on September 6. The ultimate result is far from a foregone conclusion but some are celebrating a victory in the recently issued amendment. Pahrump Fair Water founding member Debra Strickland offered comments on behalf of the organization.

“I would say it was nice to see that DWR took the incentive to make that change, because it was the fair thing to do. The amendment is the first step in what we would like to become a stay of the order, of course,” she said. “It did affect a lot of people so it’s made a great impact by showing a willingness by DWR to at least work together or try to compromise on the situation.”

Strickland, who owns a construction and well-drilling company, said she was able to personally witness the reaction of some of those whose home development had been in the works and who would now be able to continue with that pursuit, which was touching to see. “They are excited that the division made that change. I mean I had people crying on the phone. They were so ecstatic that they get to go on with their dreams. It’s so cool.”

According to Nye County Water District Governing Board General Manager Oz Wichman, it is estimated that there are approximately two and a half dozen properties that are affected by the change to the order.

Wichman estimated that there were about 22 parcels with Intent to Drill notices filed in the four-day period and possibly half a dozen properties that would be affected by the second portion of the amendment.

Wichman further explained that for those who come under these exceptions but who had already purchased water rights to support their well, they have the opportunity to recoup their financial outlay. “So for people that fell within the four-day time frame, who already went out a bought water rights and relinquished them in support of a domestic well in compliance with Order #1293, DWR will allow those folks to count that two acre-feet as an asset the individual(s) can sell to recover costs,” Wichman continued. “I am not sure how many of these there are, but I am under the impression that there are very few, something like a half dozen or less.”

The letter of request from the Nye County Water District can be obtained at www.nyecounty.net in the meeting center, under item #11 of the Dec. 11, 2017 meeting of the water board.