Nevada to begin marijuana lounge application process in October
By Ricardo Torres-Cortez Special to the Pahrump Valley Times
September 15, 2022 - 10:46 am 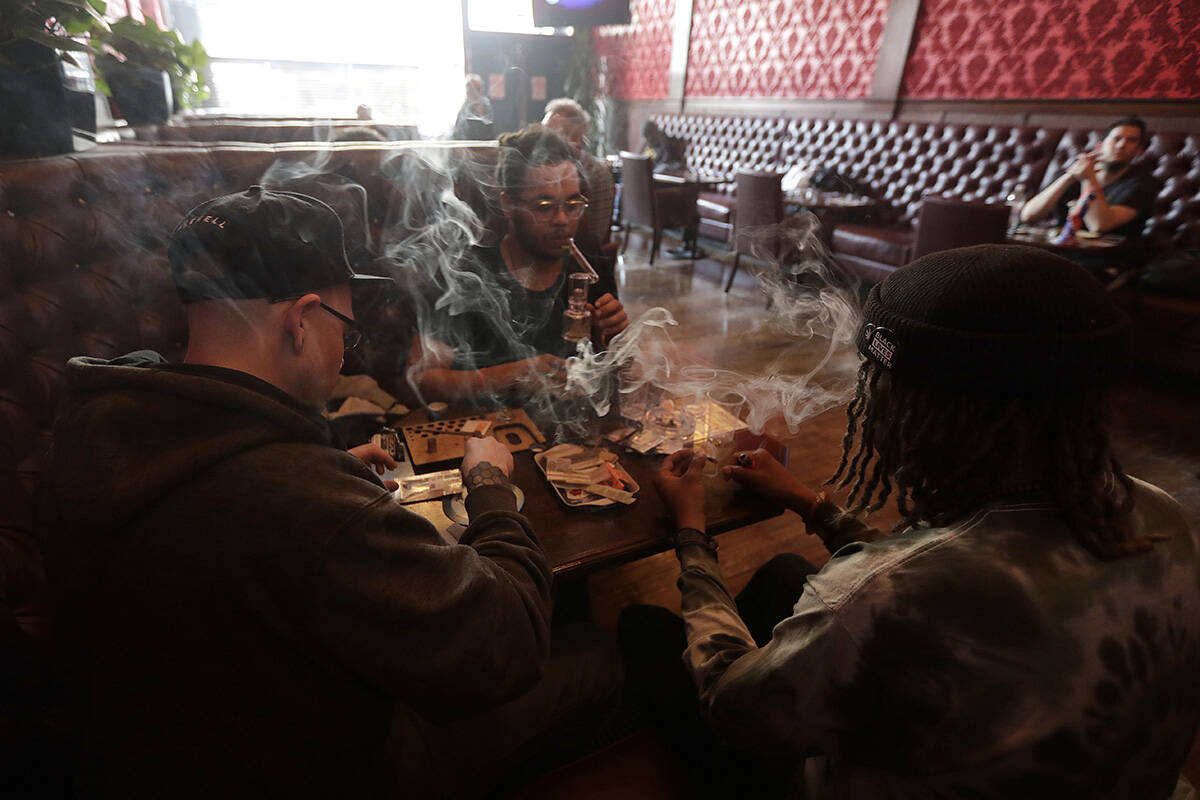 Rick Thompson, clockwise from left, Keith Baskerville and Xavier Baskerville smoke marijuana while sitting in a booth in the smoking lounge at Barbary Coast Dispensary in San Francisco in March 2018. (AP Photo/Jeff Chiu)

Nevada is set to open the application window for licensing of marijuana consumption lounges across the state.

The process will open for 10 business days between Oct. 14-27, the Nevada Cannabis Compliance Board announced Wednesday.

“That is the only time” they’ll be able to apply, Michael Miles, deputy director of the board said during a training seminar early this month.

The state expects to issue up to 45 licenses to owners of marijuana dispensaries with social lounges, reminiscent to bars, attached or adjacent to them.

That’s in addition to the 20 licenses the state will issue to standalone lounges, half of which would go to “social equity applicants,” who were negatively affected by marijuana laws before the state legalized the drug in 2017.

It’s expected that every current dispensary that meets requirements for a lounge will get a state license. Since the independent licenses are limited, applicants will be placed on a random-number generator that will essentially function like a lottery.

“This will be the first open application period for cannabis licenses since 2018, providing an opportunity for new business models and more diverse ownership in Nevada’s cannabis industry,” Tiana Bohner, compliance board spokeswoman, wrote in a statement. “For the first time, licenses will be awarded to social equity applicants, furthering the state’s commitment to ensuring a more inclusive and equitable marketplace.”

After the application window closes, Nevada will be one step closer to allowing legal, public pot consumption since state lawmakers legalized the lounges during the 2021 legislative session. Although marijuana is legal, public use of the drug hasn’t been allowed until lounges were authorized by state lawmakers.

The next step will be licensing at the local level. Municipalities can strengthen, but not weaken, state policies.

In October 2021, the Nye County Commission voted to allow cannabis lounges here, with commissioner Donna Cox the only dissenting vote. Pahrump has two legal cannabis dispensaries and another dispensary opened this summer in Esmeralda County near Tonopah. It means the area could possibly see as many as three cannabis lounges, depending on the pending regulations.

“We’ll have to see what the CCB is going to allow us to have to begin with,” Commissioner Leo Blundo explained last October at a commission meeting. “The way I understood it was, you would be eligible for one of these licenses per dispensary. We’re looking at two, and we’ve already made a request for a third one in an area outside of Pahrump.”

Nonrefundable application fees in Nevada were set at $100,000 for dispensaries; $10,000 for independent applicants, and $2,500 for social equity applicants.

This is the only licensing round in the state’s plans, and issuing additional licenses would be dependent on changes to state law, said the compliance board, which has hosted Q&A and training sessions with prospective applicants. Another webinar is scheduled for Sept. 30.

Robin Hebrock contributed to the reporting on this story.