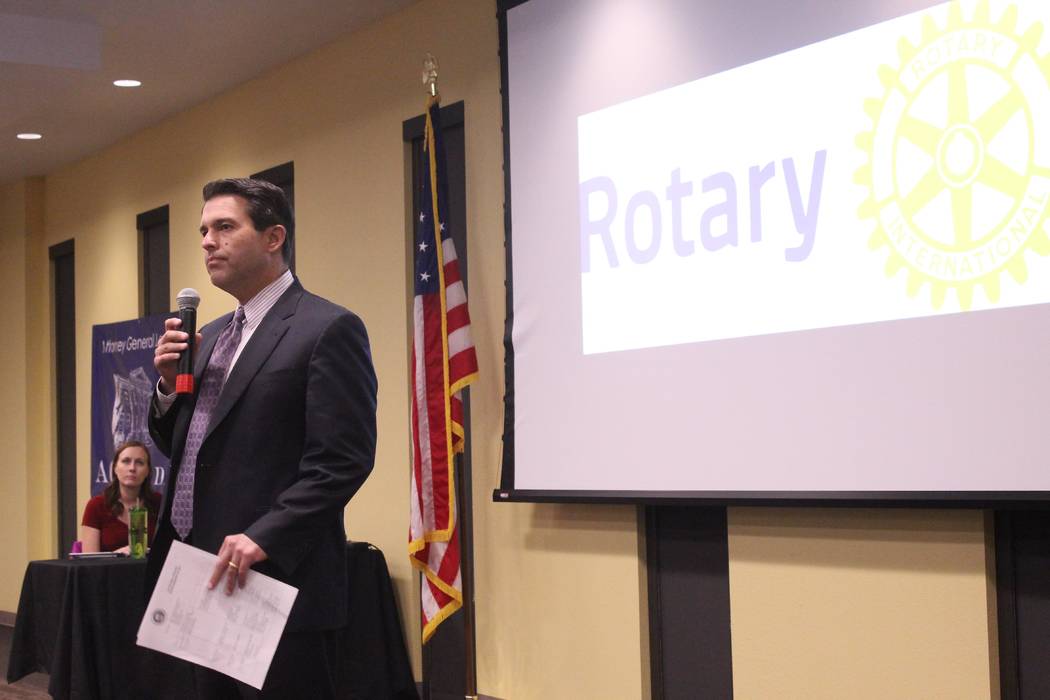 Jeffrey Meehan/Pahrump Valley Times Brin Gibson, chief deputy, gaming division at the Nevada Attorney General's office speaks to members of the Rotary Club of Pahrump Valley, Valley Electric Association and others on Sept. 26, 2017 at Valley Electric's conference center at 800 E. Highway 372. Gibson was one of several speakers from the Nevada Office of the Attorney General that spoke about their role in the office, along with issues Nevadan's are facing. 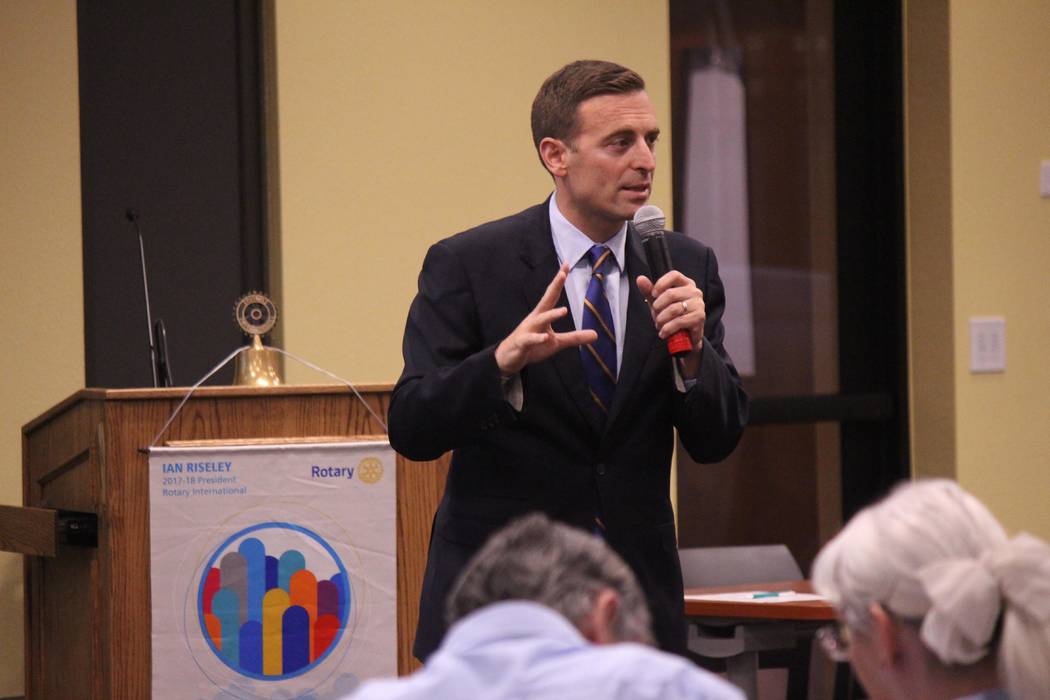 Jeffrey Meehan/Pahrump Valley Times Nevada Attorney General Adam Laxalt speaks during the meeting of the Rotary Club of Pahrump Valley on Sept. 26, 2017 at Valley Electric Association's conference center at 800 E. Highway 372. Laxalt's stop was part of his tour named "AG for a Day Tour." The tour, which included Pahrump, also included stops in several counties across the state. 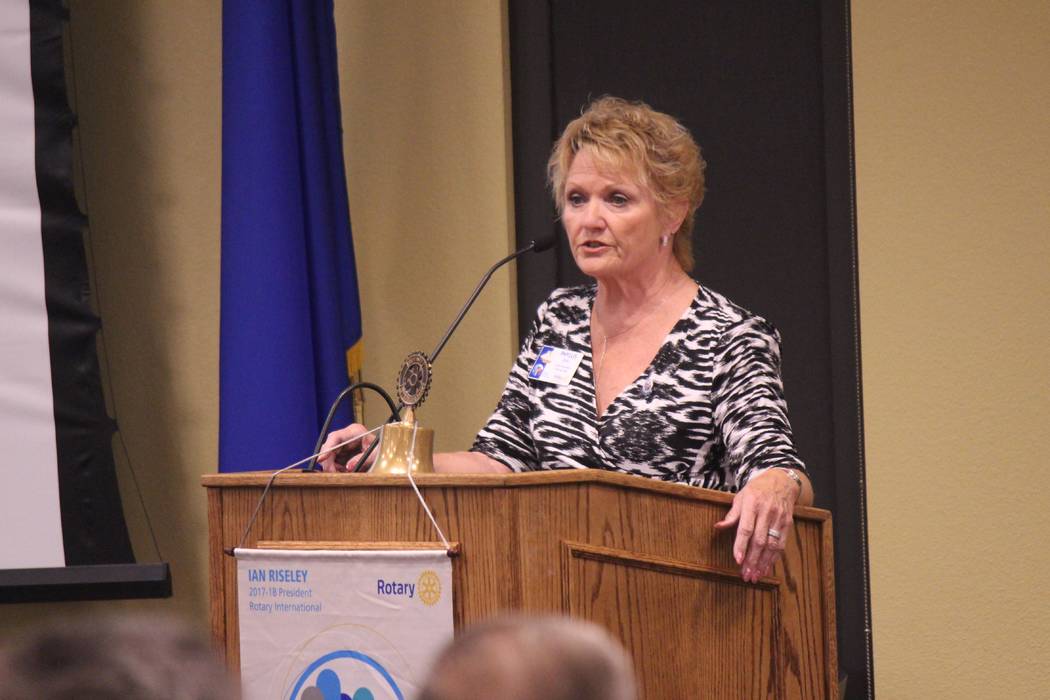 Jeffrey Meehan/Pahrump Valley Times Phyllis Deal, president of the Rotary Club of Pahrump Valley, speaks at the Rotary's regular meeting at Valley Electric Association's conference center at 800 E Highway 372 on Sept. 26, 2017. The Rotary Club welcomed Nevada Attorney General Adam Laxalt, along with staff from the attorney general's office, to speak about what the office does and some of the issues Nevadan's are facing.

Nevada Attorney General Adam Laxalt made his way through Pahrump this week as part of his tour across several counties in the state.

The attorney general is speculated to announce his run for governor of Nevada in the coming weeks.

Laxalt, along with several members from his office, joined an official meeting of the Pahrump Valley Rotary Club at Valley Electric Association’s conference center at 800 E. Highway 372 at 6 p.m. on Tuesday as part of Laxalt’s “AG for a Day Tour,” designed to create a better dialogue with citizens from across Nevada and their concerns.

Presenters from the state attorney general’s office, including Laxalt, spoke for roughly an hour about what the office does and the role each speaker plays in it.

The group also spoke about important issues that communities across the state are currently facing and what solutions the office might have: Identity theft and the financial exploitation of senior citizens were just a couple of the issues focused on.

“Consumer protection to criminal prosecution to representing all the state agencies in Nevada, we’re incredibly busy, doing a lot of great work around the state of Nevada,” Laxalt said to a room of more than 30 Rotary Club members, representatives from Valley Electric and local residents.

Laxalt pointed to the magnitude of his office that contains roughly 400 employees and a budget of about $100 million, he said.

The tour’s background stretches back several decades when then-Nevada Gov. Paul Laxalt, the attorney general’s grandfather, held an event with similar premises. Paul Laxalt, who started his “Capital for a Day” tour in 1968, traveled across the state with members of his cabinet “to identify and address issues of concern,” according to a news release from the attorney general’s office.

Patricia Cafferata, special assistant attorney general for law enforcement, counties and municipalities, who spoke at the event, said Adam Laxalt’s 2017 tour started in Ely in June. Since then, Laxalt and members of his office have traveled to many areas including Elko, Fallon, Las Vegas and Tonopah.

During his time in Pahrump, Laxalt toured Valley Electric and the Spring Mountain Motorsports Ranch.

In 2016, Laxalt also stopped in Pahrump during his annual “AG for a Day” tour, Cafferata said.

Identity theft has been a major topic since the announcement of the Equifax data breach. According to a news release in September, about 1.2 million Nevadans were affected by the breach.

Also speaking at the Rotary Club meeting was Roland Swanson, chief of investigations at the attorney general’s office.

Swanson spoke about how the office has worked to address an issue of financial exploitation of senior citizens. In the past, law enforcement officials might have seen a power of attorney or guardianship in place and dismissed the situation as a civil matter, he explained.

Swanson said the office has worked with law enforcement to teach them that there could be a criminal component involved in a case.

The attorney general’s office launched a multi-agency task force in 2016 to help reduce the number of incidents in Nevada.

It’s been widely speculated that Laxalt plans to run for governor in the 2018 elections, though he’s made no formal announcement to run for attorney general again or governor. Laxalt was elected to office in 2015.

A June 2 report in the Las Vegas Review-Journal said Laxalt had raised more than $600,000 in campaign cash since April 1.

Laxalt wouldn’t answer what his intentions were for 2018 during his stop in Pahrump.

“We’re not doing any politics here; we’re here on official business to speak to Pahrump,” he said in an interview with the Pahrump Valley Times before going onstage.

Some have already announced their intentions to be on the Republican ticket for governor in 2018, including Nevada Treasurer Dan Schwartz.