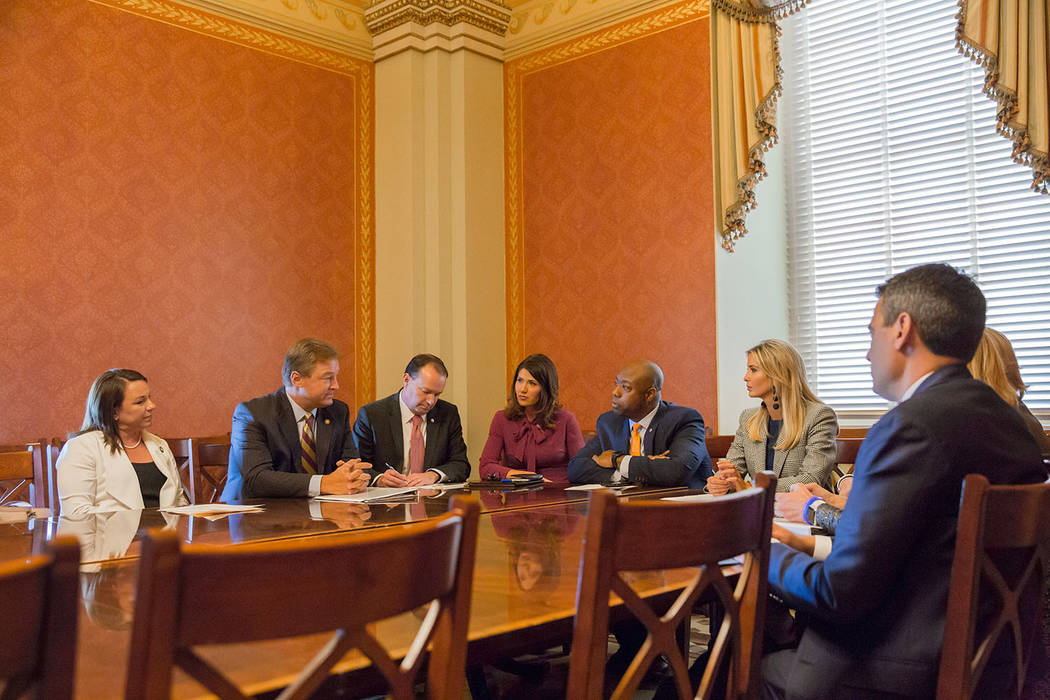 Special to the Pahrump Valley Times U.S. Sen. Dean Heller, R-Nevada, (second from left) speaks with Ivanka Trump, a daughter of President Trump, and others during a meeting Wednesday in Washington, D.C. In a conference call with rural Nevada newspapers Heller talked about a gamut of issues including tax reform, health care and the stalled nuclear waste repository in Nye County.

U.S. Sen. Dean Heller, R-Nevada, said he is the only person who keeps Yucca Mountain from moving forward.

In a conference call with rural Nevada newspapers, including the Pahrump Valley Times on Wednesday, Heller talked about a gamut of issues including tax reform, health care and the stalled nuclear waste repository in Nye County.

U.S. Rep. John Shimkus, R-Illinois, the main supporter of Yucca Mountain in the U.S. House of Representatives, spoke to the Reno-Sparks Chamber of Commerce last week, where he called Yucca Mountain “one of the best locations you could ever think of that’s been researched more than any piece of property on the planet,” according to the Las Vegas Review-Journal report.

The visit came as Shimkus’ bill, titled the Nuclear Waste Policy Amendments Act of 2017, is making its way through Congress.

The legislation, which aims to restart the controversial project in the middle of Nevada desert, was approved in late June by the U.S. House Energy and Commerce, led by Shimkus.

Jordan Haverly, spokesman for Shimkus, said the congressman remains committed to moving the Nuclear Waste Policy Amendments Act of 2017 through the House in a bipartisan manner.

“The legislation passed 49-4 in our committee and we hope that translates to similar bipartisanship in both the House and Senate,” Haverly said in an email.

Heller said although Shimkus wants “to push Yucca Mountain whether Nevada likes it or not,” he is committed to fighting the proposed nuclear waste repository 90 miles northwest of Las Vegas.

“Otherwise being a friend of mine, we highly disagree on this particular issue,” Heller said about Shimkus.

The Shimkus bill has yet to be voted on in the House, and Heller said it’s his understanding the House anticipates to take a vote on the legislation before Thanksgiving.

“I’ve already told Shimkus that this bill is dead in the Senate. He is going to keep pushing himself, I’ve urged the Congressional delegation to do everything they possibly can to stop it on the House side, let’s see how well that progresses. I have a lot of confidence in them, but this is a very, very sticky and very difficult issue,” Heller said.

Heller said he isn’t sure about the fate of the bill, but said Shimkus is “pretty confident” that he can get the Yucca Mountain bill out of the House.

Heller said he plans to do “everything he possibly can” to keep the measure off the Senate floor.

Nevada officials, including Gov. Brian Sandoval and the state’s congressional delegation, with exception of U.S. Rep. Mark Amodei, R-Carson City, are strongly opposed to Yucca Mountain. Officials in Nye County, the host of the proposed nuclear waste repository, view the project as an economic engine.

Earlier this year, Nye County welcomed the Trump administration’s proposed $120 million in his fiscal year 2018 blueprint budget for restart of the licensing proceeding of Yucca Mountain.

“I am sad to hear that Senator Heller doesn’t seem to care what the rural counties closest to Yucca Mountain want,” Schinhofen said.

Nye is one of nine rural Nevada counties surrounding Yucca Mountain that want to see the licensing process move forward. Schinhofen said the process would vet the science and resolve the state of Nevada’s 218 admitted contentions to the project.

Heller said over the last 10 years, he has had “numerous” discussions with Nye County representatives on the issue.

“I represent Nye County, and I’m proud to do that, but I also represent 16 other counties, and I have to take all of that into consideration,” Heller said.

Schinhofen meanwhile, questioned why Heller would want to stop “$3 million coming to Nye County that would come with the licensing process moving forward.”

As an example, Schinhofen said the money could be used to provide medical and emergency management services to the central and northern parts of Nye County, where resources are scarce.

Funding the law will give the state of Nevada the opportunity to finally prove what the state claims, that the project is unsafe, Schinhofen said.

“By not voting for funding, we will continue in a perpetual loop of rhetoric and scare tactics,” Schinhofen said. “We need to have the process play out so that all concerns can be heard and have the science finally decide Yucca Mountain, not politicians.”