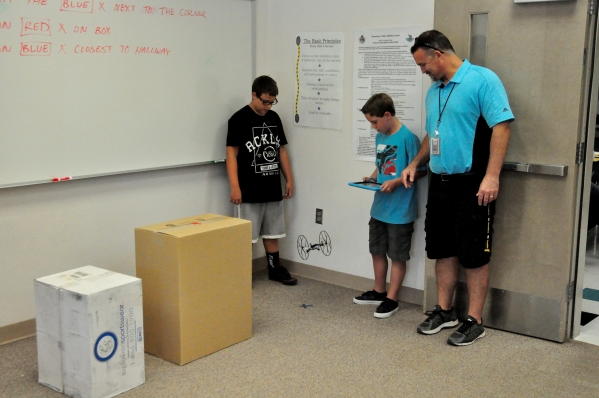 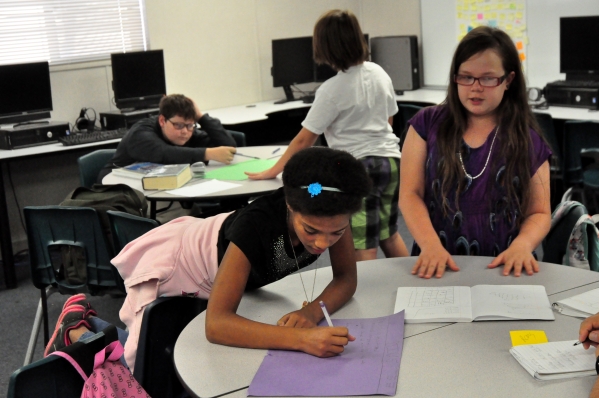 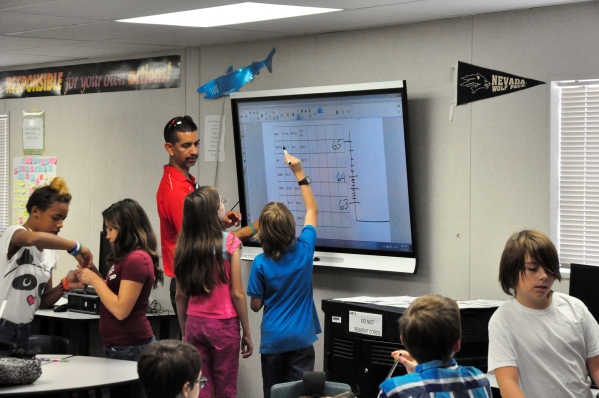 Picture a student sitting quietly taking notes in a long lecture from an engineering teacher — not happening in Pahrump, at least not at the middle school. Rather, a new way of learning math and science is here.

Across the country math and science scores continue to be below average.

Rosemary Clarke Middle School in Pahrump has unveiled a new education program this year to try to stem this national trend in Nye County.

The program is called STEM and STEAM. STEM stands for science, technology, engineering and math, whereas the A in STEAM stands for art.

STEAM is taught by Armando Veloz and STEM is taught by Joe Clayton at the middle school. The classes are electives and are open to sixth through eighth grade students.

Principal Tim Wombaker started the classes this year after two years of researching the benefits.

“I heard about the STEM and STEAM through conferences I have attended,” he said. “At the conference they stressed that kids learn by doing. So we need to start changing the way we approach science and math.”

To connect with the kids, Wombaker believes he needs to bring in more technology with a different approach to teaching. Lecture style and seat work are out, while hands-on learning and project-based learning are in.

With STEM and STEAM, the old model of teachers standing in front of the class for the entire period lecturing is gone.

“The students need more hands-on experiences for the kids to make them more interested in the education,” Wombaker said.

He said technology is one way of hooking them and getting them interested.

“Right now the kids across the country are into video games and are more into sitting at home if you will, but society is technology,” he said. “In the next couple of years they say there will be 750,000 jobs just in computer programming. Kids understand the gaming world and I don’t want to run from that technology either. We need to try to embrace it.”

The principal hopes his classes will get kids excited about math and science.

“We want to get kids excited about learning, teaching them about coding and programming, like game design and things like that,” the principal said. “This is something to interest the kids in learning and learn math and science at the same time.”

On the day the PVT visited Rosemary Clarke Middle School, the STEM class was being taught coding. Clayton’s class learned to code so they could program a drone and make it take off and land.

Students had to program a computer using code and in turn the code would tell a drone how to fly.

Christian Mott showed the PVT what he had learned and the drone did fly.

“The hardest part was making it hover and then land,” Mott said. “I have done this before, but it was not like this.”

At least he had done this before, most adults over 50 would just be scratching their heads.

The project-based classes have students learning by doing.

Clayton said the kids are learning by working in groups and not just listening to him.

“We have group activities and more movement in the classroom,” he said.

“They have seat work, but they work in group work too.”

In STEM and STEAM, many of the advanced students become the teachers.

“The students get into it and often can be found teaching other students and encouraging them,” Wombaker said. “We were watching some students from Amargosa learning to code and apparently they knew a lot about the topic and could be seen teaching others how to do it.”

Veloz said you won’t find his class a quiet haven of learning.

Veloz said it was good noise though. The kids work in groups and work together to solve the problems.

“We hit the critical thinking standards that the math classes may not hit,”

According to Wombaker, 30 percent of the schools across the country have implemented this curriculum.

He said project-based learning has been big.

“They say that students retain the information by doing and the figure is by 70 percent more.” Wombaker said. “It’s not a new concept. You have to bring something in though that is from their generation. They are into coding, they are into computers and technology.”