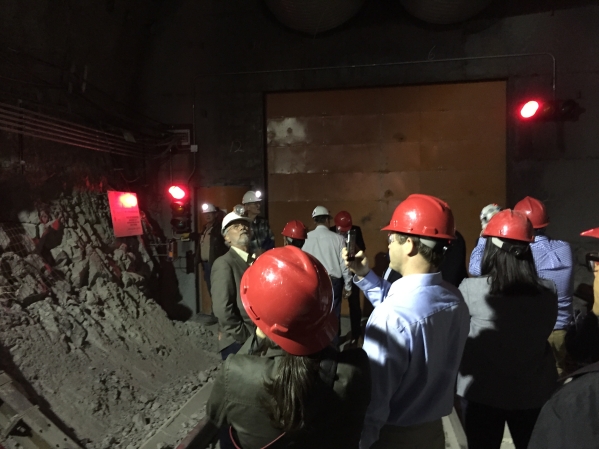 Some of the local officials expressed optimism after the Nuclear Regulatory Commission last week released a study concluding that a proposed nuclear waste repository on Yucca Mountain wouldn’t present a significant health risk.

The Las Vegas Review-Journal reports the Nuclear Regulatory Commission said in the draft study that a nuclear waste repository at the Nevada site would yield “only a negligible increase” in health risks from radioactive particles that might leak into groundwater.

Robert Halstead, director of the Nevada Agency for Nuclear Projects lambasted the report, calling it “defective.” However, Nye County Commissioner Dan Schinhofen said the county was happy to hear yet another study that shows the repository can be done safely.

“While the state calls this another flawed study, I guess, the only studies they consider not flawed are the ones that oppose Yucca (project),” Schinhofen said in an email. “Nye County is open to whatever the science shows, for or against.”

Director of the Nye County nuclear waste project Darrell Lacy said the report was consistent with previous studies by the Department of Energy, the National Labs and Nye County. The studies completed by DOE have always shown a very low risk to the public, he said.

“This report supports our statements that if Yucca Mountain was found to be safe then we should have a discussion about mitigation of impacts and benefits to the county and the state of Nevada,” he said.

The environmental impact from potential contaminants would be small compared to normal background radiation, according to the NRC study released Thursday which was based on groundwork the DOE performed when it had applied for a repository license in 2008.

Under the Nuclear Regulatory Commission the term “small” means that “the environmental effects are not detectable or are so minor that they will neither destabilize nor noticeably alter any important attribute of the resource,” said former chief scientist of the Yucca Mountain project, Dr. Michael Voegele.

The study concluded the maximum dose of potential contamination in Amargosa Valley would be 1.3 millirems, which it said was “a small fraction” of normal background radiation of 300 millirems a year, and “much less” than NRC standards, the Las Vegas Review-Journal reports.

The 173-page document yet again highlighted the ongoing clashes between proponents and supporters of the Yucca Mountain project.

One of the strongest arguments used by the proponents of the Yucca project is jobs and tax revenue for the cash-strapped county.

“This would be the largest employer and taxpayer in the county once construction starts ’ about 2,000 to 3,000 direct jobs with several thousand more from support contractors and spin-off jobs like home building and teachers,” Lacy said.

Once construction starts, officials expect total benefits of at least $20 million a year which would go on for 60 to 100 years, Lacy said. The licensing and technical support could start as soon as next spring if funding is approved by U.S. Congress, he added.

“This should include money for Nye County to participate in the License Review and restart our science program,” Lacy said. “We would expect some Payment Equal to Taxes (PETT) funding shortly thereafter. Before it was shut down we received $3 to $4 million a year for our scientific oversight program and $10 to $12 million a year for PETT, I would expect the first year to start with smaller amounts and build up over time.”

The next step in the process would include completing the review of the license application by the NRC and receiving contentions from opponents.

“This will take at least three years, during this time DOE can evaluate other rail corridors, start additional design and engineering and hopefully have a discussion with the county and state about mitigation of impacts and benefits like highways, water and money for education,” Lacy said. “I assume there will be lawsuits and appeals which can slow things down a lot.”