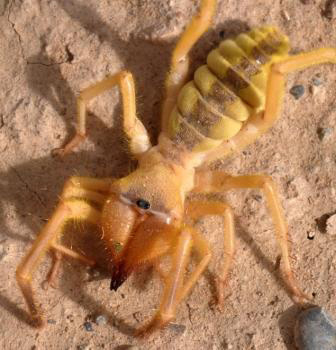 Remember the photos of those big, scary spiders taken by U.S. soldiers in Iraq a few years ago? Turns out this Arabian arachnid has a much smaller cousin living in a desert near you.

Biologists at the Nevada National Security Site (NNSS) have identified a unique species of spider and named it Hemerotrecha kaboomi. Hemerotrecha refers to its genus — kaboomi to its home at the historical nuclear testing grounds.

Like the spider in Iraq, kaboomi is considered a Solfugid, known more commonly as a sun spider, which is a carnivorous, non-poisonous spider that lives in many deserts throughout the world. But according to NNSS biologist Paul Greger, “kaboomi is smaller than many of its counterparts, measuring only 1 -2 inches in length, and displays subtle taxonomic characteristics that differentiate it from other sun spiders.”

Jack Brookhart and Paula Cushing from the Denver Museum of Science and Nature worked with Greger in 2011 to collect numerous spider specimens at the NNSS. Brookhart and Cushing later formally identified kaboomi as a species unique to the area. “Thirty-nine spider species have been collected at the NNSS over the years,” Greger explained. “So far, kaboomi is the only one that hasn’t been seen anywhere else but the NNSS.”

The sun spider comes in many different varieties. While kaboomi measures just 1-2 inches in length, its cousins living in the Syrian Desert can reach up to 8 inches long. These are also referred to as camel spiders and wind scorpions.