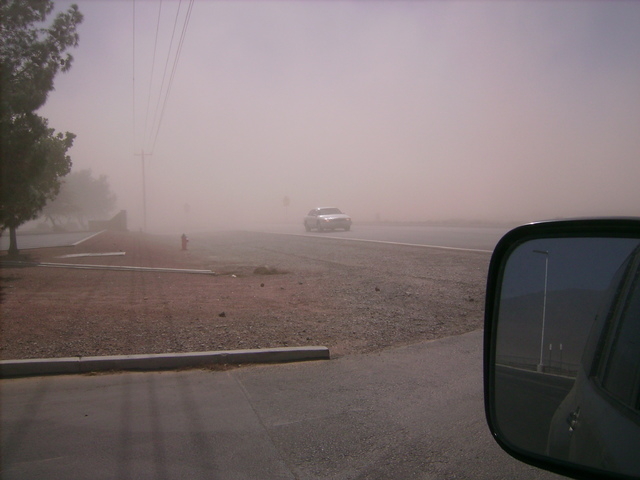 Kathy Stone said she has had to wear goggles and a mask sometimes while walking her dog, to protect her eyes and lungs when dust storms kick up near her home at 560 Antelope Ave. in the Desert Trails subdivision in northern Pahrump Valley.

Dust is a common complaint among Pahrump residents, especially after windy days like last Sunday when a cold front blew into Pahrump. But Stone, who moved to Pahrump in 1999, dreamt of living in a master-planned community built by Focus Group, complete with an 11-acre park with walking trails. But plans for 1,100 homes at full build-out never materialized in the recession, only 84 homes were built in Desert Trails Subdivision Unit 1. A 550-acre farm reverted back to the Harris family.

In her Oct. 13 letter to the U.S. Environmental Protection Agency, and Nevada Division of Environmental Protection, Stone wrote: “The trouble is that deal with Focus fell through when the real estate market cratered and they got the unimproved, undeveloped land back and have done nothing to it since. Yes we live in a desert and expect some dirt in the air when the wind blows, however the dirt created by this denuded land whenever the wind blows is now worse than the dust bowl of the 1930s. It looks just like the haboobs in Arizona. The dirt has and is depriving us our right to the use of our backyard, pool and porch because we can’t be outside and be able to breathe due to the dirt coming off their land.”

Stone’s pictures show a lack of visibility across Blagg Road, where traffic has come to a standstill, she said, adding the poor air quality is causing students and teachers at nearby Rosemary Clarke Middle School and Manse Elementary School to inhale the dirt.

“Over the last two months I’ve had to stop twice on the highways by absolutely zero visibility on Bell Vista, Blagg and Simkins. It’s not long before there’s going to be a fatal collision,” said Phil Hider, who lives on Antelope Ave. “When the heavy stuff has been blown off the top you have true dust bowl conditions.”

Hider said he collected 80 pounds of sand from the courtyard and his front step last weekend.

“All through the house it has totally negated and wiped out my fire alarm system. All my fire alarms I’ve had to take off the ceiling because as soon as you plug them in, the dust swirls, they all go off. Kathy can hear the alarm next door and on one occasion she called the police,” Hider said.

“This dirt absolutely covers the schools to the point that the students cannot go outside for recess or P.E. because it is so unhealthy for them to breathe this air,” Stone said.

Stone charged the Nye County Planning Department was at fault for not requiring the property owner to re-vegetate the property.

“One of the issues there is the county and state exclude farming from our regulations. It’s farmland even though it hasn’t been used in a couple years,” County Planning Director Darrell Lacy said. “We have made contact with the landowners. They’re looking at alternatives to try to reduce it in a cost-effective manner.”

Nye County School Superintendent Dale Norton said if the current principal at Rosemary Clarke Middle School or Manse Elementary decides not to have recess outside, he supports their decision. But he said the school district doesn’t have any control over the problem which is coming from private property.

“It’s OK until the wind blows towards the schools. As a principal that opened RCMS in 2000 we had similar issues on occasion. On top of the wind blowing dust from the Desert Trails development and across the open area just west of RCMS the dust would set off the fire alarms and we had a mandatory evacuation with the fire department rolling up and clearing the campus to enter into the buildings as prescribed by NV Revised Statute. All staff and students had to stand out in the wind/dust due to the unscheduled, unplanned fire alarms going off,” Norton said in an email to the Pahrump Valley Times.

Landowner Dan Harris, with Harris Farms, said Focus didn’t do any clear cutting of the land. When the housing development didn’t take off, he said they recovered the farm field in exactly the condition they left it. The last year they farmed it, about 10 years ago, Harris said they didn’t disc the land. Near the farm, small sand dunes can be seen, built up from sand blowing that was contained by creosote or sagebrush, that doesn’t exist on the large lot.

Harris said they have agricultural water rights that can be used to plant a crop of perhaps Sudan grass on part of the land. They will put down one and a quarter mile of pipeline to irrigate, from three agricultural wells that are still on the property.

“We’re going to throw a lot of money at it,” Harris said. “We’re trying to be a good neighbor.”