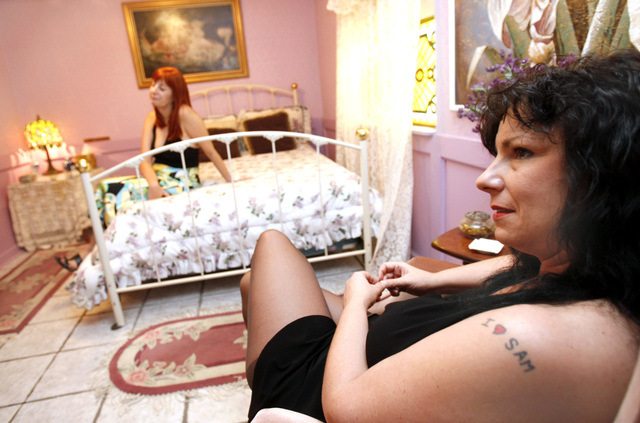 Bobbi Davis was the owner and operator of the Shady Lady Brothel, located about 20 miles north of Beatty in Nye County, until it closed Dec. 14.

Davis has a quick mind and considerable insight into human nature and social relations. I conducted an oral history with her in 2011. This is the fourth and final column in this series taken from that interview.

Davis says the learning curve for a woman new to brothel work is not high. The curve would only be high for a woman who has never had sex before. The virgins who have sought work in Davis’ brothel are usually told to go home.

“I’m terrible,” she admonishes herself. Other operators, she notes, would love to have a virgin employed. She notes that there’s one owner who has “virgin auctions.” Davis says, “I’ve had (women) who have asked to do that.” She tells them “No.” She says when you lose your virginity you want to do it with someone you at least semi-like. You may not love them but you want to at least like them. “After that,” she said, “you can make up your own mind.” She said she tells (women) who are virgins and want to work in her brothel, “Go home, and come back later.”

She pointed out that she’s had women come to her brothel and do their first party and then go into the bathroom and start throwing up. She sends them home.

“They think they can do it, but when they actually have to, all their little hang-ups come in and then they get sick,” Davis said. One woman to whom this happened told Davis, “I can do it, just give me another chance.”

Davis said, “No!” She told the woman, “If you’re acting the way you are, one of two things is going to likely happen. One, you’ll wind up hating men altogether. Two, you’ll probably be on drugs or alcohol. To be able to do your job, you’ll have to either be drunk or loaded.”

Davis told her, “If that’s what it takes to do your job, you need another line of work.”

Davis said successful brothel prostitutes need to be sensitive to their customers’ needs and pay attention to what they’re talking about. Sometimes a customer will discuss his fantasy with a woman. Although she might sometimes be tempted, the girl doesn’t want to burst out laughing and embarrass the fellow. She has to learn, if she doesn’t already know, how to respond supportively and say, “Okay,” if it’s something she can do. If it’s a request for something she can’t or isn’t willing to do, she says, “I can’t do that but I do know someone who might.” She refers him to another girl.

Davis said most women develop a sensitivity after they’ve been in the business awhile.

They pick up subtle cues and try to evaluate where the guy is coming from. They ask themselves, “Where have I seen this before?” She says a girl might realize that’s what another guy did and remember the way that worked out. She says girls learn to pay more attention to what people are saying.

Davis said the most important thing to learn is that “most of what (customers) say is bull. They’ll tell you all kinds of stories.” She said, “They’ll tell you that they’re rich or that their family is rich and that they don’t need to work and they’ve got plenty of money. Then when they pull down their pants they’ve got on underwear that looks like moths have been eating on it for six months.”

Obviously, if a guy’s got money he’s not going to be wearing underwear that’s worn out or socks that have holes in them. On the other hand, she said it’s a bad sign if guys show up with a suit on and black shiny shoes and big rings. She said she doesn’t see as much of that as she used to because it sends the wrong signal. When a guy comes in looking extra prosperous, the client realizes the girls think he has more money and jack up their prices.

Some men go in the opposite direction now and try to look like they don’t have much money. Davis said that it doesn’t matter that much at her brothel, Shady Lady, because service prices are posted. But many brothels don’t post prices, charging whatever the traffic will bear.

The price of sex has gone up exponentially in Nevada brothels over the last 45 or 50 years. Such price increases have far outpaced inflation. The question is why? One would think if the laws of supply and demand apply, as the so-called sexual revolution unfolds and unmarried sex becomes more available throughout society, prices would have gone down. Yet, just the opposite has happened.

Davis suggests one thing that happened was a couple of brothels decided they were going to charge high-end prices and would not let their girls accept anything less than a minimum amount.

“They’ll ask for the world, and they won’t budge,” she said. And so the prices were set high and there was only room for negotiation down to a price that was still high compared to what it had been.

This became the common practice and a new pricing system took hold where girls interpreted lower prices as beneath them. They would not go under a certain amount regardless.

Davis said that’s how the big prices came in. She said when Dennis Hof showed on HBO that girls were making $1,500 to $2,000 an hour, women started thinking, “Well, if she can get it, I’m prettier than she is, why can’t I get it?” Even when the economy deteriorated the prices were not adjusted to the new conditions. The women lived off fewer customers. In some cases, they perhaps even increased their prices.

“There are some places now where you can’t get a party for a week’s pay,” Davis said.

Prostitutes don’t have to do quantity now and that’s easier on the girl. “You can’t argue with that,” she said. Is there a sex price bubble as with the real estate and other economic bubbles?

Davis thinks there could be, but she said, “It never seems to pop.”

In some places, she said, the price just gets higher and higher. In some brothels now the minimum price is $300 or $400. But that’s for an hour.