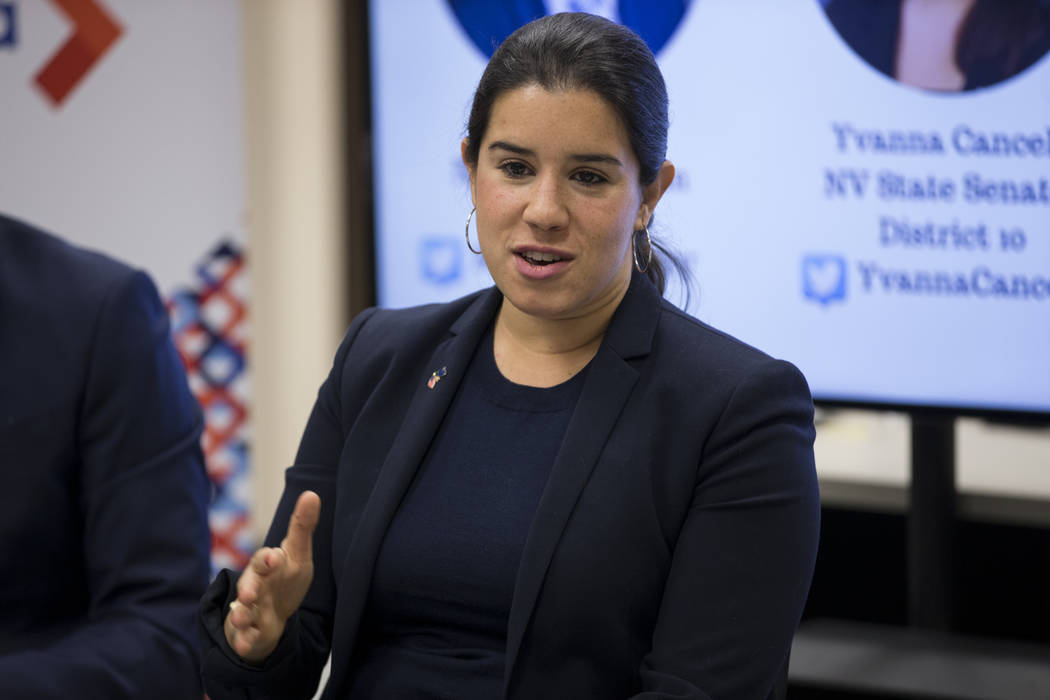 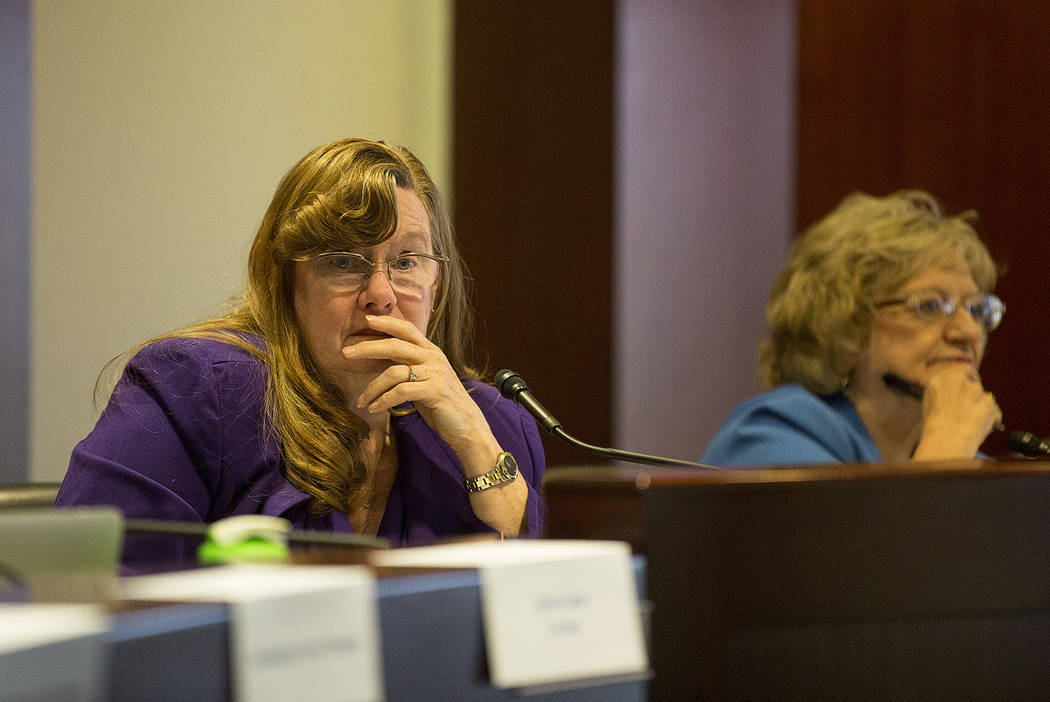 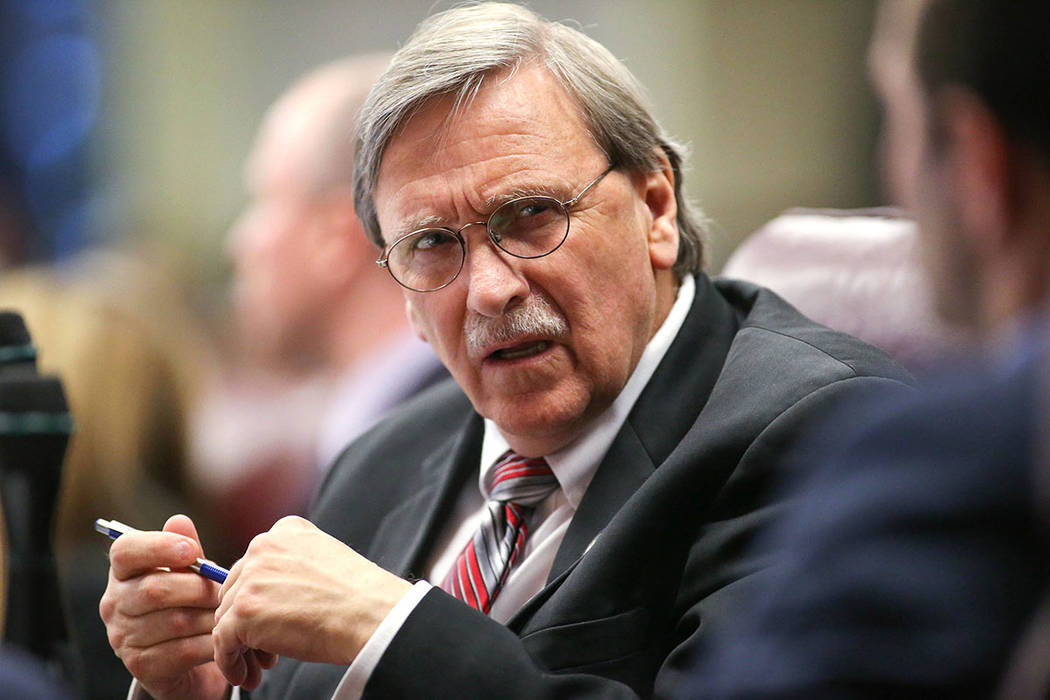 Nevada Assembly Republicans John Ellison, left, and Derek Armstrong work on the Assembly floor in the final hours of the session at the Legislative Building in Carson City, Nev., on Monday, June 1, 2015. (Cathleen Allison/Las Vegas Review-Journal)

More than one-quarter of the Nevada Legislature seats up for election this fall have effectively been decided.

Of the 53 seats on the Nov. 6 ballot, 14 are uncontested, meaning there’s only one candidate in the race. Of those 14, only 4 of the candidates had primary opponents. Ten candidates knew from the end of the filing period in the spring they would retain their seats.

Leadership from both Democrats and Republicans think voter registration numbers and the time commitment required to serve are major contributing factors leading to the uptick in uncontested seats.

In the meantime, the reality is that more than dozen lawmakers can eschew campaign tactics, instead helping out fellow candidates in tougher districts and can focus on preparing for the upcoming session.

Voter registration numbers are the No. 1 reason people choose not to run in certain districts, said Eric Roberts, the executive director of the Assembly Republican Caucus. Once the voter registration deficit hits about 20 percent, winning the race becomes nearly impossible.

He thinks poorly drawn districts are why so many races have only Democrats running.

When he talks to Republican candidates interested in those districts, Roberts lets them know it’s going to be a tough road, with little to no resources or support because there’s going to be more focus on the tighter districts.

But getting a candidate who is willing to “fall on the sword,” those races can help the party as a whole, he said.

Even though the candidates may have little shot at winning, they can get out and talk to undecided or nonpartisan voters and may convince them to go to the polls and vote Republican.

“It could be the difference from that person choosing to vote at all,” he said. “It can make a big impact there.”

Assembly leader Jason Frierson said the time commitment required to serve in Nevada’s legislature also leads to uncontested races. Between work and family, otherwise good candidates can’t carve out the time. Frierson said he doesn’t necessarily believe in putting a candidate up in a district just for show, and that continuous cultivating of leaders in districts is going to matter more as the recently implemented term limits come to fruition.

“We have to stay ready with lists of people who are engaged and able again to make that sacrifice to serve,” he said. “That’s part of what I believe my responsibility is, as term limits have fully matriculated now, we have to be ready for transitioning leadership.”

In Senate District 10, Democrat Yvanna Cancela easily defeated a primary challenger and drew no Republican candidate. The remaining 13 uncontested races are on the Assembly side. Three Republicans — all incumbents — are facing uncontested elections, the other 10 are Democrats.

Assemblywoman Maggie Carlton, a Democrat, said she can’t remember a time before this year when she didn’t have a single challenger for her seat. Carlton served 12 years in the Senate before moving to the Assembly in 2010.

“I think part of it is if you do a good job, people don’t feel like they need to replace you, and if you stay connected to your district and you stay involved folks feel like you represent them,” she said.

Carlton’s district — like almost all of the uncontested races — swings heavily in her favor in terms of voter registration. Her district has more than 14,000 registered Democrats compared to 4,600 registered Republicans. It would be a clear uphill battle for a Republican to unseat her, another reason why Carlton thinks she has an easy path to re-election.

Those in uncontested races have an advantage: they don’t have to spend as much time courting their own voters, and can help out fellow Democrats who may be caught up in closer races. But Carlton says it’s still important for her to get out and knock on doors in her district. If she doesn’t, who will, she says.

Assemblyman John Ellison, R-Elko, who won his primary by a large margin, and said he doesn’t think Democrats could find anyone to challenge him.

Assembly District 33, which Ellison represents, only has about 5,600 registered Democrats and more than 17,000 registered Republicans. But Ellison, who has served as a city councilman and county commissioner in his district, said he works with all of his constituents to try to represent their concerns in the Legislature.

“We work with everybody, it doesn’t mean we always agree to everything, but we try to work through everything that we can,” he said. “I still am a very conservative individual.”