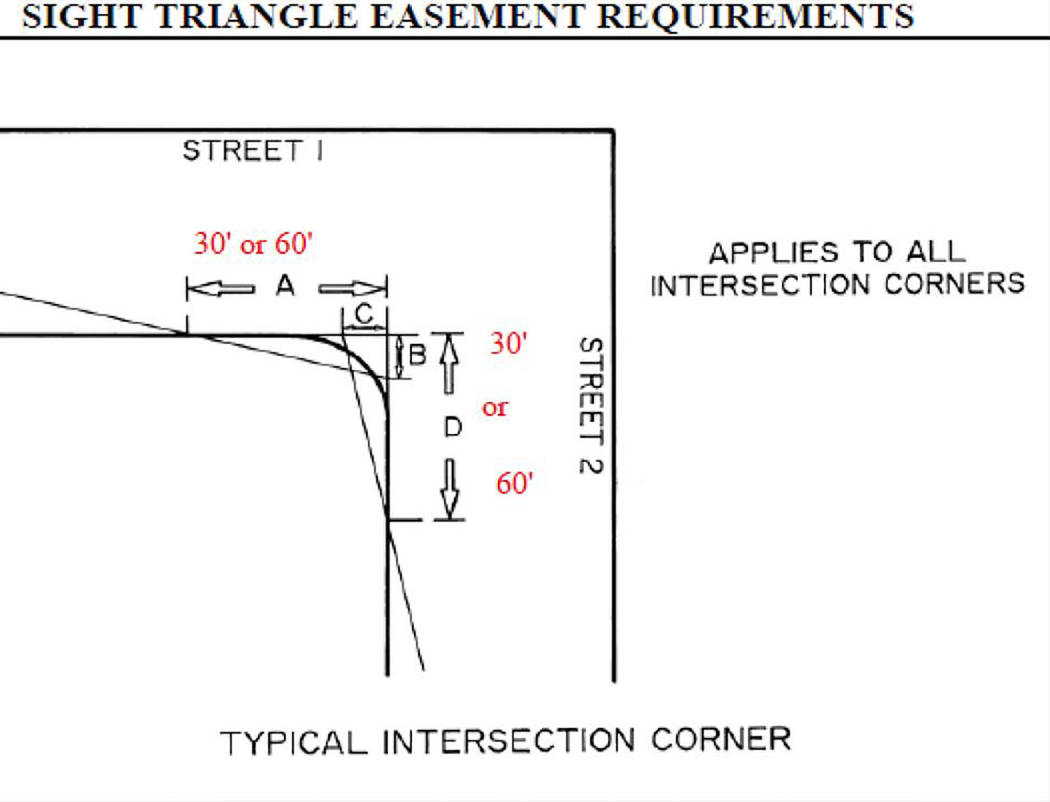 Special to the Pahrump Valley Times This diagram was provided by Nye County and details the minimum "sight triangle easement" regulations candidates must follow for the primary season. 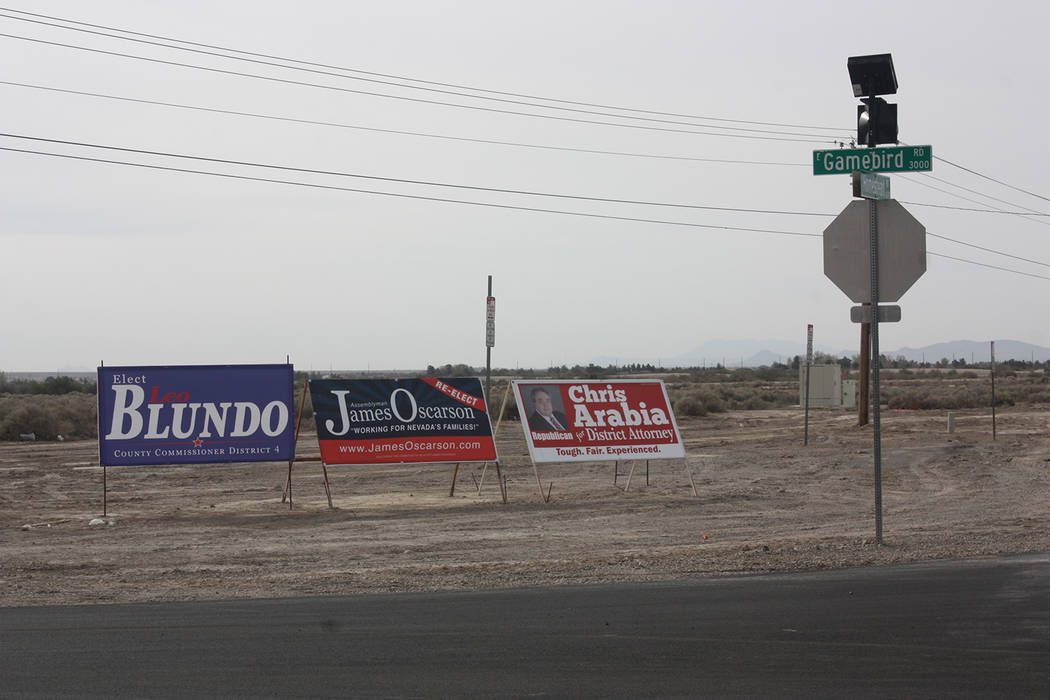 Robin Hebrock/Pahrump Valley Times Intersections are always popular locations for campaign signs, such as these at the corner of Homestead and Gamebird roads in Pahrump.

With the primary election rapidly approaching and the time in which candidates can make an impression on voters shrinking every day, campaigning is moving forward full steam.

Campaign signs, one of the most traditional and visible symbols of the election process, are now popping up all over the valley with the names of those seeking office, entreating voters to choose them. Candidates need to keep in mind, however, that there are rules and regulations to be followed when choosing where to place their signs.

In an effort to ensure all understand these regulations, Nye County issued a news release detailing the requirements political hopefuls will have to follow for the 2018 primary election season.

“In response to recent questions about campaign sign placements within Nye County’s right of way, Nye County code compliance is restating the regulation that will be enforced this primary campaign season only,” the release stated. “Although in the past Nye County has been very lenient in regards to campaign signs, Nye County Code 12.04 states no signs, whether placed temporarily or otherwise, are allowed to be set in the county-regulated area.”

“That being said, we do recognize the fact that many of you have already purchased your signs for this campaign season with the intention you would be allowed to place them as they have been allowed to be placed in the past,” the release continued. “Therefore, code compliance provided candidates with the guidelines that will be enforced for this primary election season only.”

As explained by the county, campaign signs can be located within the county right of way subject to several conditions.

Size is important to note as well. Signs in excess of 30 inches in height, or two and a half feet, are prohibited from being erected within the “sight triangle easement,” the area surrounding all entrances and exits to parking lots, driveways and two-way and four-way intersections. For roads that have a limit of less than 45 miles per hour, a 30-foot clear sight triangle must be maintained. For those with a speed limit of 45 miles per hour or higher, a 60-foot clear sight triangle must be maintained.

Campaign signs are also required to be removed no later than 30 days following the primary election, which is set for June 12.

“This decision is with the understanding that Nye County does reserve the right to alter, amend or change these regulations at their discretion, at any time, to the restrictions spelled out in NCC Chapter 12.04 and NCC Chapter 17.04,” the release concluded.

Residents with complaints about signs that do not conform to the above-stated regulations should direct their concerns to Nye County by visiting www.nyecounty.net and selecting the code compliance department, where links for complaint forms are located. “Code compliance will no longer be responding to emails or phone calls for complaints,” the release read.

As a note, the county explained that the regulations outlined by the release are for the primary season, are only specific to county rights of way and do not address state rights of way. For information on state rules and regulations visit www.nevadadot.com