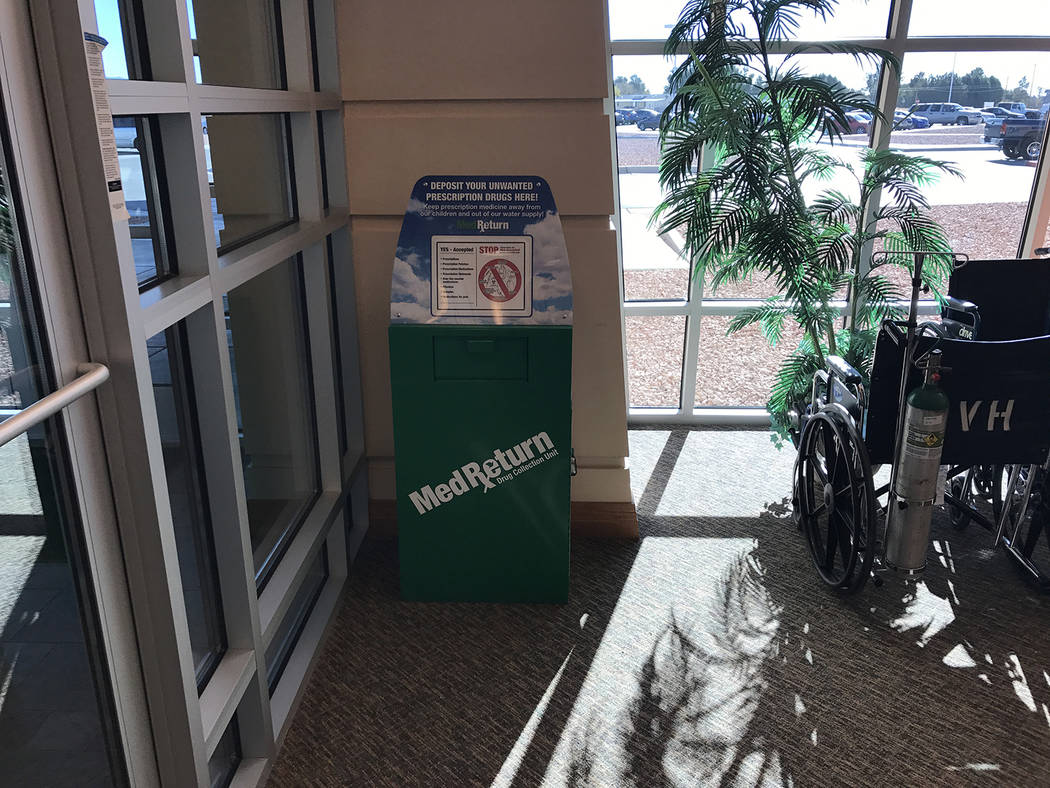 Special to the Pahrump Valley Times To help combat risks of unused or expired prescription drugs falling into the wrong hands or by damaging the environment through improper disposal, the Nye County Sheriff's Office partners with others to provide prescription drug take-back boxes at various locations in Pahrump. This box is at Desert View Hospital.

In the face of the opioid-fueled crisis that is gripping the entire country, Nye County officials are considering joining hundreds of others in an effort to force prescription drug manufacturers and distributors to pay for their role in the widespread epidemic.

The county is in the process of sending out requests for proposals from law firms that, if selected for contracting, would institute legal action against the makers and distributors of opioid-based medications on behalf of Nye County and its citizens.

The aim of the lawsuit would be recovery of damages incurred by the county government for services related to combating the problem. The proposal was put before the Nye County Commission on Jan. 16 at the request of the Nye County District Attorney’s Office.

“Currently, based on statistics provided by the State of Nevada, Nye County has over 50 percent more prescriptions written for opioids than the state on average and Clark County on average,” Nye County Deputy District Attorney Brad Richardson explained for the commission that morning.

“The impact on Nye County financially for medical, law enforcement, Drug Court and social services is tremendous. There are well over 200 plaintiffs that have already filed cases that have ended up in multi-district litigation… There are at least 100 to 200 other potential plaintiffs waiting to file suits.”

Richardson stated that there would be no cost to the county for retaining a law firm, noting that those the district attorney’s office had already spoken to were prepared to only take a contingency fee if they were successful in the lawsuit.

“They would cover the cost, there would be no cost to the county. I want to make that known to you,” Richardson emphasized. However, he did state that as none of the opioid lawsuits had yet to be settled or had gone to trial, he could not provide an estimate on the amount of money the county could potentially recover.

Nye County Commissioner Lorinda Wichman was dead set against hiring an attorney for such legal action, as she said she does not believe any funds recovered would benefit those who have been injured by the opioid epidemic.

She made a motion to deny the item with a second from Commissioner Dan Schinhofen, who explained that he believed the only people who would win in such a lawsuit would be the lawyers themselves.

Commissioner Donna Cox was on the opposite side of the fence, declaring her support for taking legal action.

“If this were to be done, the idea was to bring a lot of money, and I was told it’s vast amounts of money, to the county to help reimburse our costs that we’ve had over the years dealing with this problem,” Cox insisted. “These pharmaceuticals are just handing these out like candy and they’re ending up in the streets and they are creating a problem that is coming all the way around. And somehow we need to pay for this.”

Cox said the lawsuit would hopefully result in education on the problem, if nothing else.

Pahrump resident Debra Strickland agreed, stating that if nothing but raising awareness was accomplished, it would be worth it. Wichman replied that she understood Cox’s point but she still did not believe, after the years and energy that would likely be put into it, there would be anything to help the people coming out of the effort.

“There are 1.3 million opioids, Oxycontin, prescribed in Nye County. Take that number and divide it by our population and that is astounding,” Wanker informed the commission.

Nye County Commissioner Butch Borasky appeared to take her words to heart. “Anything we can do to help attack this problem I think we should do, as a board. I’d like to take the judge’s advice and approve this item rather than deny it,” Borasky said.

Schinhofen and Wichman were not moved, however.

“The new laws. Why don’t we see if these new laws help to cut it?” Schinhofen said, referring to a new Nevada law regulating the dispensing of prescription medications. Wichman reiterated that if she thought a lawsuit would bring relief to those suffering with addiction, she would support it but she just did not believe that would happen.

The motion to deny was voted down with Schinhofen and Wichman in favor of denial and Borasky, Cox and commission chairman John Koenig against. Cox then made a motion to approve the item, which won with a 3-2 vote.

Koenig assured the audience and his fellow commissioners that the approval simply allowed the district attorney’s office to look into law firms and the item would have to return to the board before any official approval of a contract would be considered.