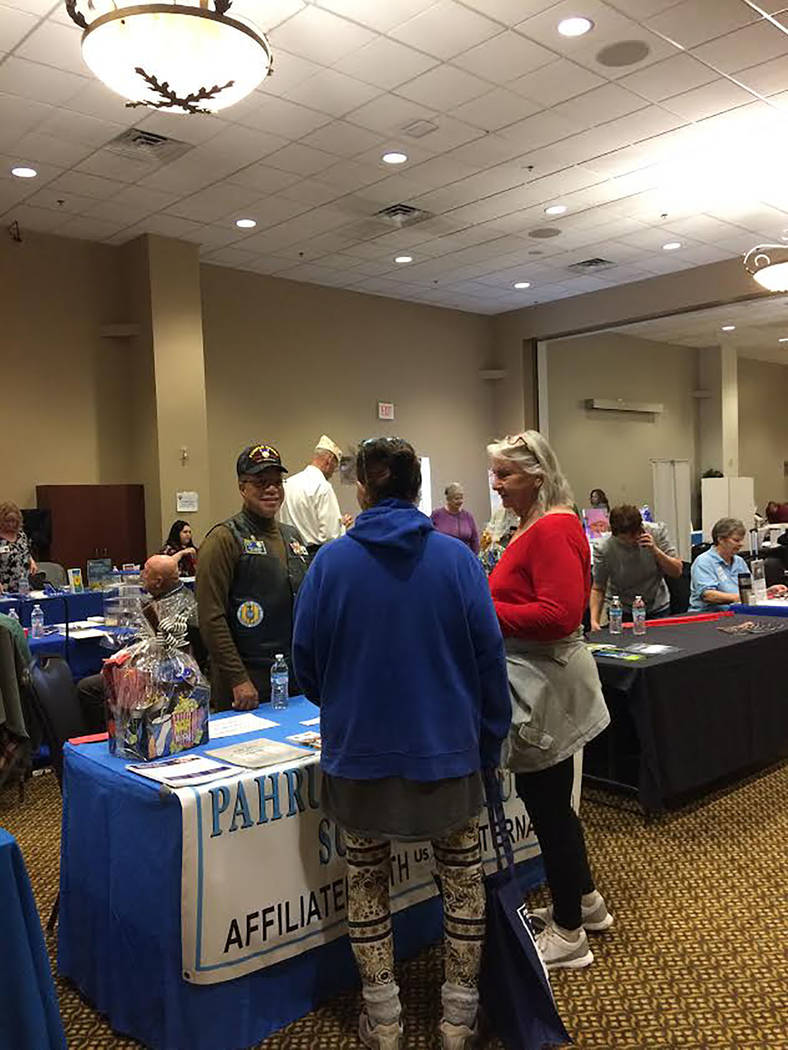 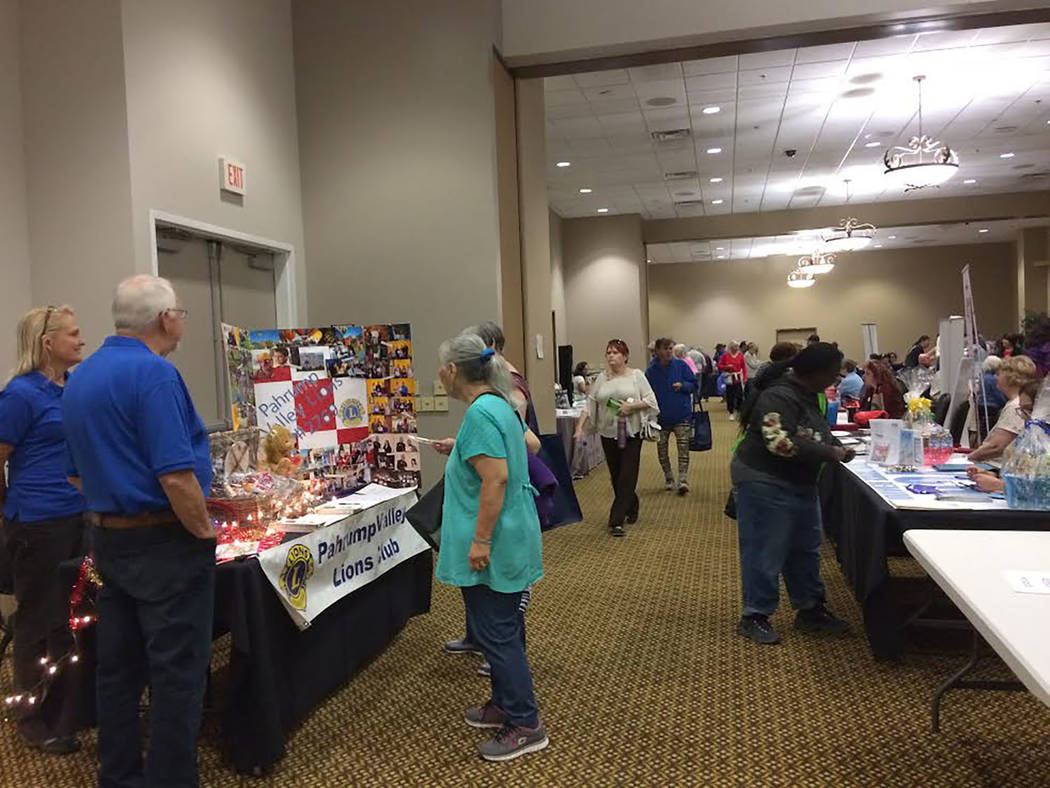 Robin Hebrock/Pahrump Valley Times Hundreds of residents made their way through the Pahrump Nugget Events Center on Wednesday, Jan. 17 to learn all about the many social services available in town. In the foreground of the photo, local Lions Club members discuss the organization with an attendee. 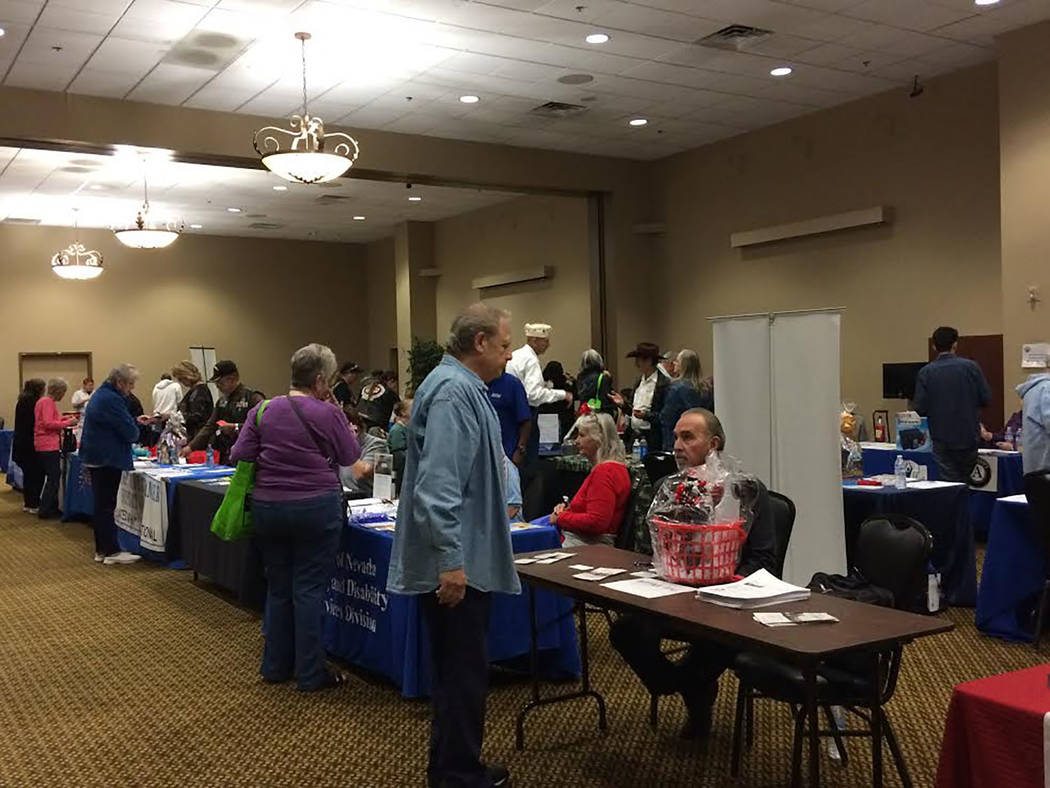 Robin Hebrock/Pahrump Valley Times The 3rd Annual Social Services Fair was hosted by Nye County Health and Human Services and brought residents and service organizations together for four hours of interaction. Attendees moved from booth to booth collecting free raffle tickets and getting to know the entities that serve the valley.

The 3rd Annual Nye County Social Services Fair brought residents and resources together under one roof on Wednesday, Jan. 17 and allowed connection between those in need and the organizations dedicated to providing assistance.

When asked if she felt the fairs overall had been a successful endeavor by her department, Smith responded, “Absolutely! It’s a great way to get the word out there on what resources are available and for the residents to have a chance to talk with them face-to-face to find out exactly what they offer.”

There was a total of 45 vendors exhibiting at the Social Services Fair, with everything from mental health services to veterans organizations to governmental programs represented, along with nearly everything in between.

There were well-known community entities such as the NyE Communities Coalition, which is a hub of many and varied programs and services, U.S. Department of Veterans Affairs representatives and the Salvation Army, as well as the Nye County School District’s Pre-K program and Pahrump Valley High School.

The Pahrump Valley Lions Club was out touting its charitable endeavors and services, as was the Prostate Cancer Support Group, Jim Gregory Chapter and residents attending the event provided a steady stream of introductions and conversations to keep those manning the booths busy.

While the Social Services Fair can be an impactful event for longstanding organizations, it has perhaps an even greater effect for those organizations just starting to serve the community. One such entity is the new Tranquility Mental Health Center, which began operations in mid-2017.

“We’re locally owned and open Monday through Thursday. We deal with anger management, impulse control, individual and family therapy, all types of mental health services,” a representative from the company explained. “And we are currently working with the courts to start a full nonprofit drug treatment facility as well, which is something that this town definitely needs.”

The event also served to introduce residents to services they may not have encountered before, such as a life coach. Pamela Keaton-Carter of I Think I Can Life Coaching Services said she was excited by the opportunity to meet with new people who she could potentially help in the future.

As of noon, approximately 175 residents had already stopped into the fair. Smith reported that the total number of attendees throughout the four-hour event was recorded at 253 residents.

Anyone who missed out on the event can learn more about the organizations that attended and more about the programs and services offered by the Nye County Health and Human Services Department by calling 775-751-7095 or visiting the office located at 1981 E. Calvada Blvd.