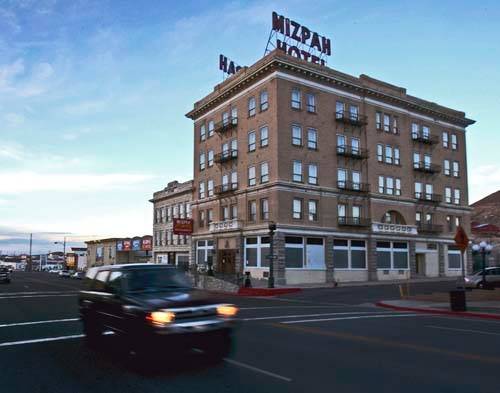 Jeffrey Meehan/Pahrump Valley Times More than 200 people made their way to Tonopah for the 2018 Rural Roundup to the Tonopah Convention Center and Mizpah Hotel. The conference, presented by the Nevada Division of Tourism, helps tourism industry professionals learn how to grow tourism in rural areas. 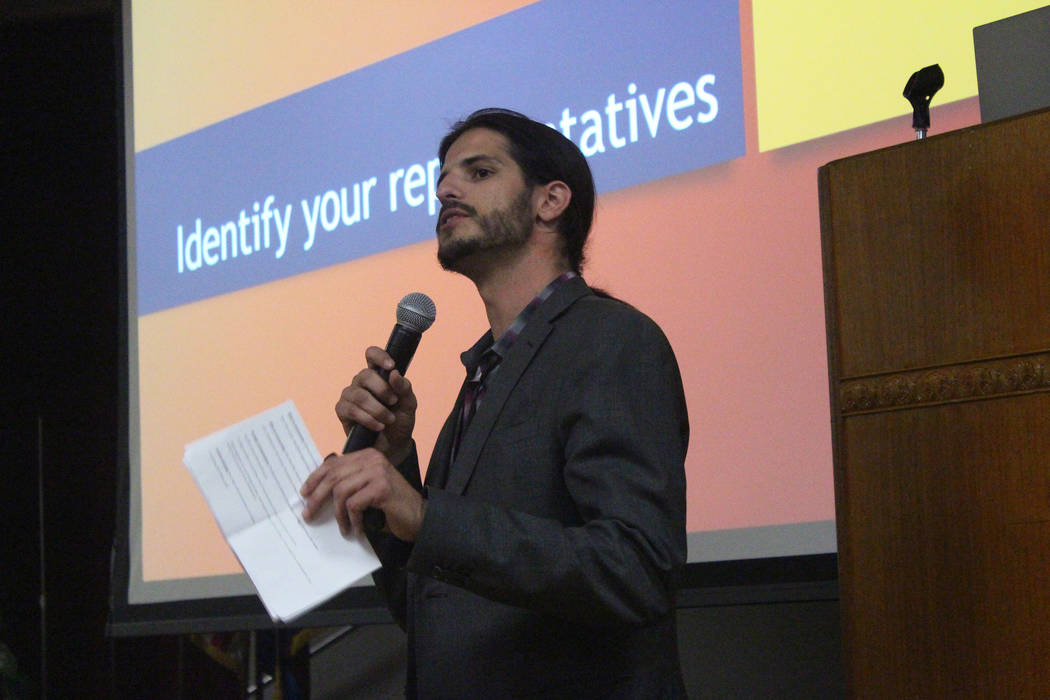 Jeffrey Meehan/Pahrump Valley Times Nick Vassiliadis, director of government affairs at R&R Partners, speaks on how to better leverage state and local representatives on projects and initiatives that could help to advance tourism on April 12, 2018. Vassiliadis spoke to well over 100 tourism professionals during the Rural Roundup at the Tonopah Convention Center at 301 Brougher Ave. 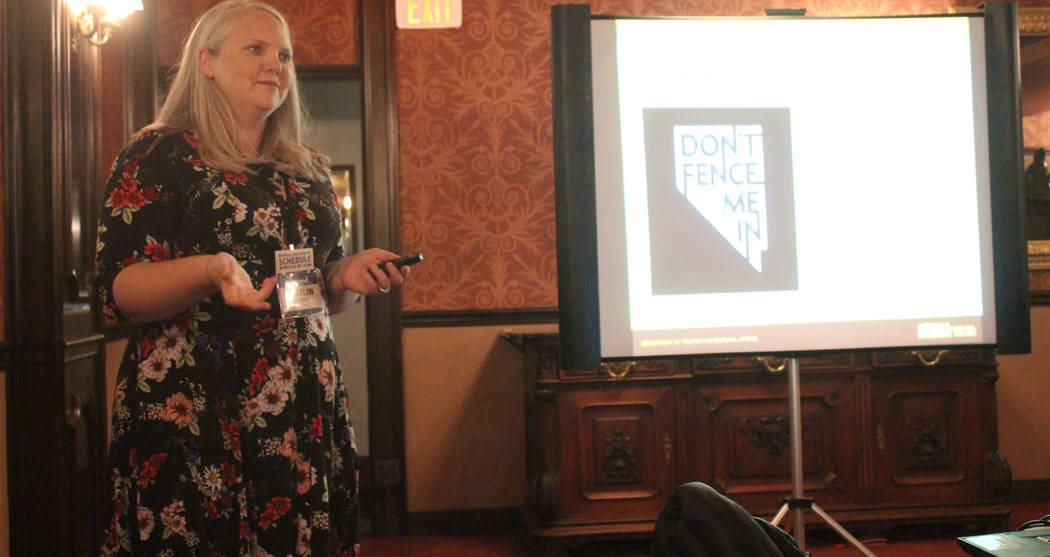 Jeffrey Meehan/Pahrump Valley Times Kaitlin Godbey of TravelNevada teaches tourism professionals and business owners on April 12, 2018 about how to better connect with the state's tourism division with social media and, in turn, enhance their own operation. Godbey led one of several sessions that was created to help industry professional improve their area's tourism flow. 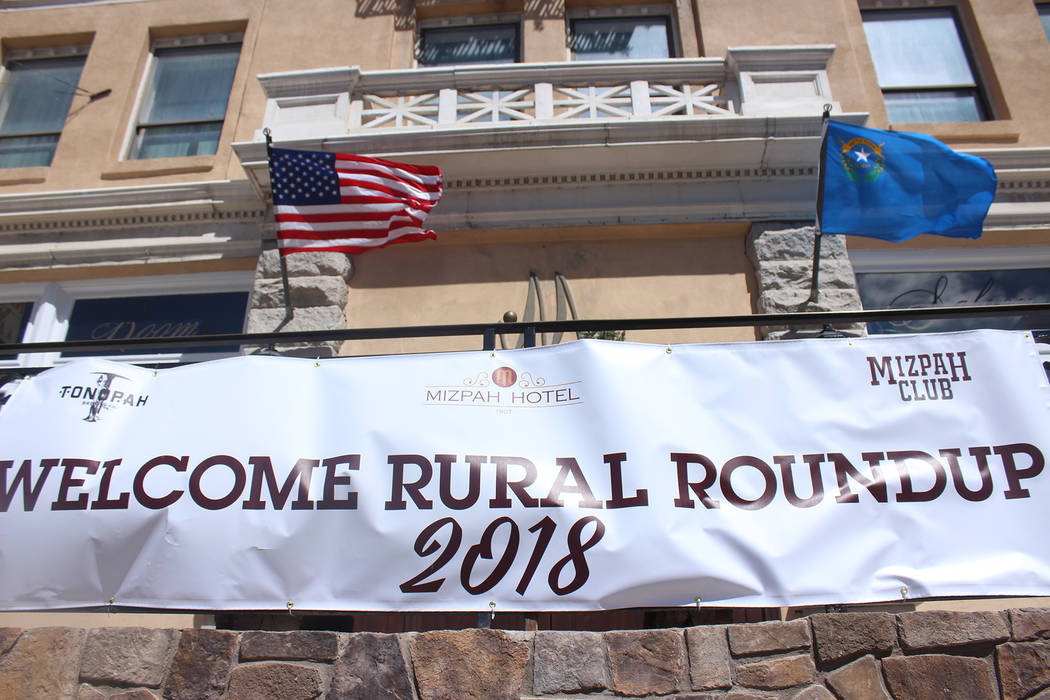 Jeffrey Meehan/Pahrump Valley Times Dozens showed for the Rural Roundup conference in Tonopah from April 11-13 for Nevada's rural tourism industry. The annual conference was organized by the Nevada Division of Tourism (TravelNevada), where industry members gained knowledge on tools and ideas on growing tourism enterprises in rural Nevada.

The Nye County town of Tonopah was in the spotlight in April with the Rural Roundup coming to town after a more than two-decade hiatus from the area.

Fighting gusty winds and cooler temperatures, dozens traveled back and forth from the Tonopah Convention Center and the Mizpah Hotel during the three-day event in Tonopah. Tourism industry professionals attend the annual event, presented by the Nevada Division of Tourism (TravelNevada), to learn techniques to increase visitation to rural Nevada.

“Hosting the Rural Roundup brought many positives to the Mizpah and the town of Tonopah,” said John McCormick, general manager of the Mizpah Hotel. “Through a great working relationship with the town, we provided an outstanding three days of activities for attendees of the TravelNevada event.”

The town’s economy was also positively impacted with convention-goers in Tonopah, the Nye County seat.

“The event had over 200 attendees who filled hotel rooms, dined in the various restaurants and enjoyed themselves after hours at Tonopah’s great venues,” McCormick said.

Town officials were also positive on the event overall, which was last in the community in 1994.

“It was a great opportunity to showcase the town, and I think that we succeeded in that regard,” said Chris Mulkerns, administrative manager for the town of Tonopah.

From industry professionals to local hotel owners such as Jim Marsh, of Tonopah Station, attendees learned about connecting with TravelNevada to improve their social media presence and promote a business or destination.

Other learning sessions also helped industry pros with their photography and drones. Part of that presentation’s focus was on astrophotography.

The convention, April 11-13, also was packed with speakers on helpful information to grow tourism.

During a luncheon event at the conference, Nick Vassiliadis, director of government affairs at R&R Partners, gave about a 40-minute presentation on how to better connect with elected officials in what was dubbed, “Leveraging Your Elected Officials for Advancing Tourism.”

Larry Cohen of Northeast Media, a media representation business, talked about how to better grab the attention of foreign travelers in his presentation “It’s Different Over There.”

Overall, tourism makes up a good portion of the state’s economic wheel.

“Tourism is a huge part of Nevada’s economy — it is 13 percent of the state’s gross domestic product, a much larger percentage than in other states,” said Lt. Gov. Mark Hutchison in a news release prior to the convention.

The Rural Roundup is an annual event.

But while the show was in town, McCormick said the Mizpah and Tonopah were able to show off their wares to the industry.

“We showed the tourism professionals throughout the state that Tonopah and the Mizpah can provide upscale meetings and conferences with excellent service for the business they sell worldwide in an Old West setting,” McCormick said. “Attendees from across the state, as well as locals involved in the event literally raved at how well the event went.”

TravelNevada officials said the event is on to Fallon in 2019.