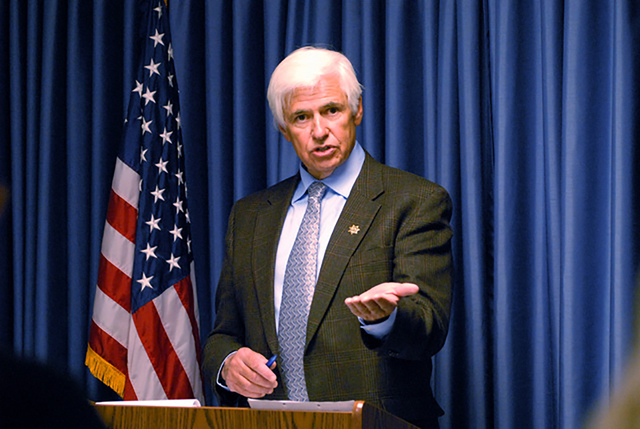 The Nye County Sheriff’s Office faces two separate federal lawsuits from current and former deputies that allege a pattern of a hostile work environment with years of sexual harassment that was tolerated by superior officers who turned a blind eye to reported problems. Former Sheriff Tony DeMeo is a named defendant in one of the lawsuits. Special to the Pahrump Valley Times

The Nye County Sheriff’s Office faces two separate federal lawsuits from current and former deputies that allege a pattern of a hostile work environment with years of sexual harassment that was tolerated by superior officers who turned a blind eye to reported problems.

In both cases, the alleged discrimination and harassment stretched back years, and lawsuits were filed only after the deputies unsuccessfully sought a resolution from Nye County’s human resources department and their superiors.

Nye County Sheriff Sharon Wehrly, who took office in January 2015, said it was inappropriate “to comment on a pending court case.”

“However, I will say, the folks accused in these cases are no longer affiliated with the Nye County Sheriff’s Office, not because of the (Equal Employment Opportunity Commission) case, but because of other independent personnel matters,” Wehrly said in a statement.

Kelly Jackson, a sergeant in the sheriff’s office, alleges she faced explicit sexual harassment that includes obscene verbal abuse, receiving inappropriate emails from colleagues on her work email account, being shown pornography on work computers and being propositioned for sex. The complaint also alleges she was cornered, groped and fondled by male co-workers.

“The bottom line is this is the single most egregious case of sexual harassment in the workplace as well as essentially targeting her … that I’ve seen in my 30-year career,” said her attorney, Matthew Callister.

The problems started early in her career and lasted for years. She became a reserve deputy in 2000 and was promoted to sergeant in 2004. By 2005, she had stress-induced lupus, which the lawsuit says came about because of the behavior.

After reporting sexual harassment, Jackson claims she faced retaliation that included stagnant wages and a lack of support staff. In one instance, she asked for a SWAT team to help extract a murder suspect who was barricaded in a house. That request was denied, the complaint alleges.

In 2013, Jackson filed complaints with human resources and the federal Equal Employment Opportunity Commission about Antonio Medina, a former officer and a defendant named in the lawsuit.

The next year, Medina became Jackson’s direct supervisor, the lawsuit says. Jackson also was bitten on the hand in 2014 by Radar, the department’s K-9 dog. The lawsuit says she was supposed to be on restricted duty, as she was unable to hold a firearm because of the injury.

Instead, Medina ordered her to carry a firearm, the lawsuit says. She also wasn’t given the tools necessary to train the dog and failed a certification test.

In contrast, a male officer had an opportunity to retake a certification test right after failing, and he received hints about where to direct the K-9 dog, the lawsuit says.

Medina’s employment with the Nye County Sheriff’s Office ended in March 2015. The lawsuit says that until he left, his harassment made Kelly “physically ill.”

The lawsuit and a different lawsuit with similar allegations were filed last week in federal court.

Jennifer Jonas alleges she faced harassment that included another deputy screaming at her after she told him to stop harassing an inmate who had invoked his right to an attorney while being booked. In another instance, a lieutenant supervising a weekly study session at the training academy — where she was the only female cadet — would constantly talk about the Little Darlings strip club and ask male cadets if they were going.

The lawsuit alleges that a hostile work environment continued even after she filed complaints, a situation that forced her to retire early in 2014. Her husband alleges a hostile work environment that included incidents such as an officer, in front of a recruit class, calling a male deputy by a name that refers to a sex act. In another instance, a different officer gyrated as if he were “having sex with an imaginary person in front of him.”

In 2010, Brian Jonas sent a memo detailing his concerns and outlining those incidents to his superiors. However, problems persisted, and in 2014 he contacted human resources about a stuffed animal in a sheriff’s office room that had “a knitted Christmas candle placed in front of it simulating a penis.”

The case also alleges he was treated differently after his wife complained about harassment, including administrators ignoring him and “snorting noises and overt stares.”

He also alleges he raised concerns about standards for hiring peace officers being violated, including the falsification of an applicant’s written and physical agility test. However, DeMeo responded by accusing Jonas of attacking his integrity, the lawsuit says.

It all culminated, Jonas says in the lawsuit when he needed medical treatment for six weeks for job-related “acute stress” and time off from work in May 2014. Jonas alleges the sheriff’s office released his name and medical condition to the media, including the Pahrump Valley Times, as a “malicious act” that resulted in a report of him not being at work due to stress.

He retired the next month.