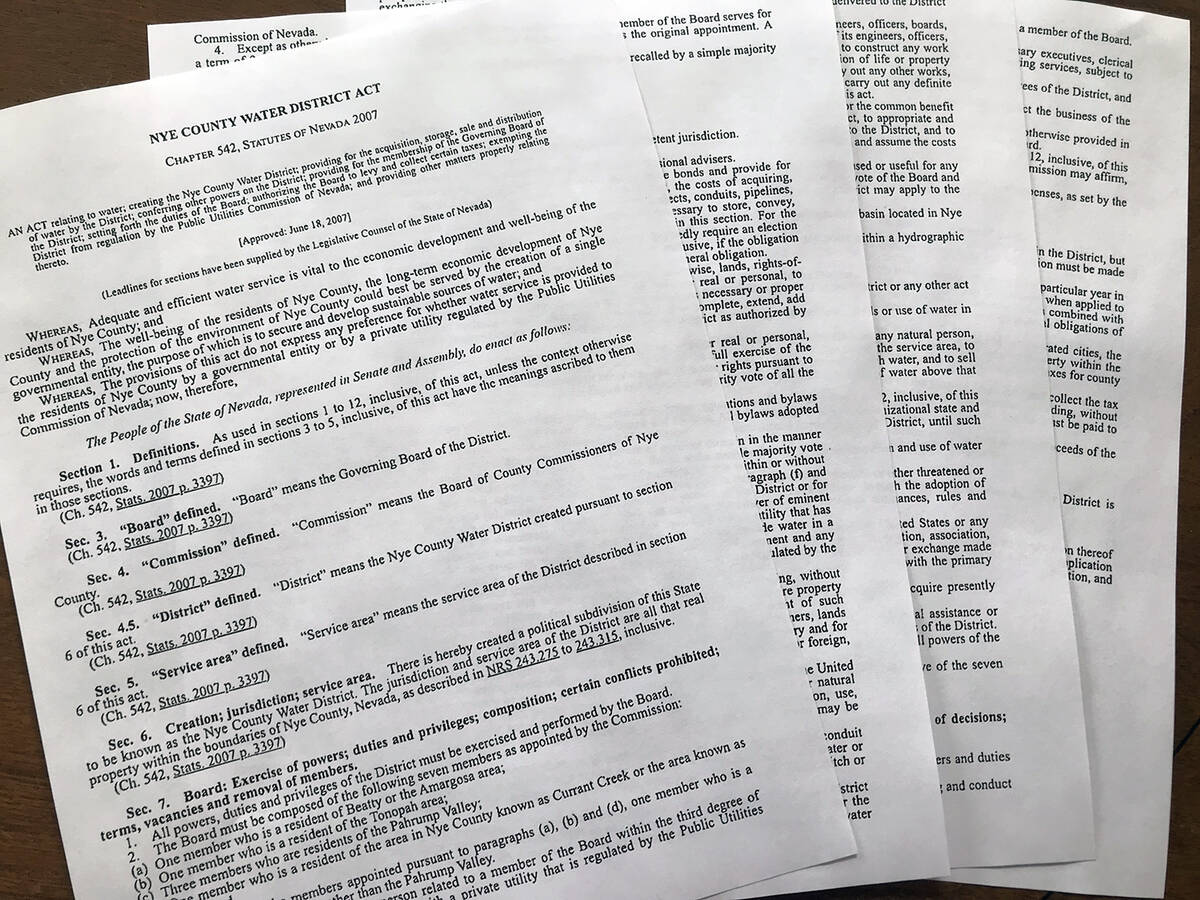 Robin Hebrock/Pahrump Valley Times The Nye County Water District Act, written into law under Nevada Revised Statute 542, is a four-page document outlining the powers and duties of the water district and its associated governing board, the members of which must be appointed by the Nye County Commission.

After unanimously recalling all seven members of the Nye County Water District Governing Board this month, the county has found itself in something of a catch-22 situation, as the act establishing the water board requires the county to appoint members to that board.

As a result, the county will be looking into having the Nye County Water District Act, enshrined in Nevada Revised Statute Chapter 542, amended or possibly even eliminated in the future but that can only be accomplished by an act of the Nevada Legislature. In the meantime, Nye County will be accepting applications for new water board members so that it does not remain in violation of state law.

The decision to remove each of the sitting members of the water board came as a result of a complaint filed in early October by water board member Helene Williams, who was appointed to her position in mid-2020. Over the past year and a half, Williams said she had been disappointed by the manner in which the board was being run and alleged that the water district general manager, rather than the board members themselves, was the true driving force behind any actions taken by that board.

When discussing the issue at the Nov. 2 meeting, commissioners expressed their own concerns regarding the water board, with commissioner Frank Carbone pointing out that this body was not performing its duties as outlined by the Nye County Water District Act.

Under that act, the water district is authorized to own water rights, operate water systems and secure funding for its activities through a variety of means, including grants and bonds, but to date, the district had failed to undertake a majority of these responsibilities. Instead, the water district had been operating off a sole funding source, a $5-per-parcel fee assessed on all properties in Nye County, and with limited funds, no water rights and no water to purvey, it was unable to obtain any grants or bonds that could provide it with additional capital with which to work.

With this in mind, and various other factors taken into account, the commission voted 5-0 to recall the water board members, triggering the resignation of the water district general manager, Oz Wichman, as well. The action left both commissioners and the public with many questions, however, about the future direction of the water board so an agenda item to allow commissioners to delve into the murky waters and decide exactly how to proceed was included in its next meeting.

Addressing the situation on Tuesday, Nov. 16, Nye County Commission Chair Debra Strickland starting off by explaining why there was a list of county-run water systems and county-owned water rights included with the backup documentation for the item.

“In the backup you will find some very relevant information when it comes to the water district governing board,” Strickland explained. “Let’s look at our backup and we’ll see how many different water and wastewater systems we currently operate and maintain in Nye County… Then you will also see all the different water rights that are owned by Nye County.”

Turning to the Nye County Water District Act itself, Strickland reiterated that the water board is to have water rights and water systems within its district. “That’s where my concern lies, is that, by not having water systems and water rights within the water district, they have lost multiple opportunities to reach out for bonds and grants to take care of our water systems. We need work in Gabbs, we need work in Manhattan. Our resources are limited, because the Nye County Water District Governing Board could have been doing that,” Strickland stated, with commissioner Leo Blundo chiming in, “Should have.”

Strickland said she felt it was important that the county have a water board but she would prefer to see that all of those seated on that board be elected officials, such as commissioners themselves or elected town board members. “Because what has happened in the past is that accountability has not existed for the people,” Strickland said.

She cited two specific examples, the first of which was the issuance of Order #1293A, which is a Nevada State Engineer order that requires those who wish to drill a new domestic well in Pahrump to first obtain two acre-feet of water rights and relinquish them back to the state, unless water rights have already been dedicated or relinquished in support of a well on that specific property.

She also touched on the upheaval that occurred when the water board approved a 600% increase on its per-parcel fee, which would have taken the fee from $5 per year to $35 per year, an action that was only stopped because an appeal was filed to the Nye County Commission, which overturned the increase.

Strickland acknowledged that there could be some contention over the idea of placing commissioners on the water board, since the commission is the body to which the public can appeal if they are in disagreement with an action taken by the water board. However, she said she has talked with commissioners in other parts of the state and found that it is actually a fairly common practice to have elected officials sitting on local water district boards.

From commissioner Leo Blundo’s perspective, there were other considerations to think about when it comes to seating elected officials. He noted that there are five commissioners but only four of them could be on the water board at one time, due to the residence requirements in the water act. He said the issue with appeals was one that needed to be thought about as well.

Carbone turned to the Nye County District Attorney’s Office to ask if it would be possible to place elected officials on the water board and deputy DA Marla Zlotek said the office would definitely look into that.

Commissioner Donna Cox on the other hand said she was leaning more toward the idea of having an advisory board created that would report to the commission, which would then make all decisions on water issues.

She said that was the original idea when Senate Bill 21 was before the Nevada Legislature in 2017, a bill that sought to disband the water board. That bill passed in the state Senate committee but did not get a hearing in the Assembly committee, so it ultimately died.

Strickland interjected that unfortunately, the water district act does not allow for that sort of setup and as it stands, the county has a water district with no board to govern it, a situation that needs to be rectified. Carbone concurred, adding that the county has no choice but to follow the act as written until it can get changes made, which will not be possible until the 2023 Legislative Session.

Blundo then circled back to the crux of Strickland’s comments, asking if she was proposing that the county give a water system or systems, or water rights, to the water district.

His concern with the concept of transferring responsibility to the water district for a water system was the costs that would be associated, expressing a fear that such an action could lead to the need for the water district to raise its fees or establish other fees or taxes as revenue streams to pay for much-needed repairs on those water systems.

Strickland responded that grants could be sought to cover those costs but Cox took issue with that proposal, asserting that she felt grants should be used for future projects, not water system repairs. Blundo then suggested that the county look at doing something more simple to start with, such as transferring a few water rights to the water district and go from there.

The intensive discussion continued for a full hour, with the public having its say and commissioners hashing and rehashing out their thoughts and ideas but in the end, only one action was taken. The commissioners directed staff to draw up an advertisement seeking applications from the public to fill the seven vacancies.

When it came to Strickland’s proposal to have only elected officials appointed to the water board, Blundo said he was hesitant to advertise the openings that way because it might violate the provisions of the water district act, which has little qualification requirements except that the members live in certain areas. However, he said he felt she had made her preferences clear and the commissioners could take those into consideration when selecting from the pool of applicants.

“A member of the board or any person related to a member of the board within the third degree of consanguinity or affinity must not be affiliated with a private utility that is regulated by the Public Utilities Commission of Nevada,” the water act stipulates.

Water board terms are to be for a period of two years.

The applications notice will be posted on the Nye County website and advertised in the Pahrump Valley Times in the near future.