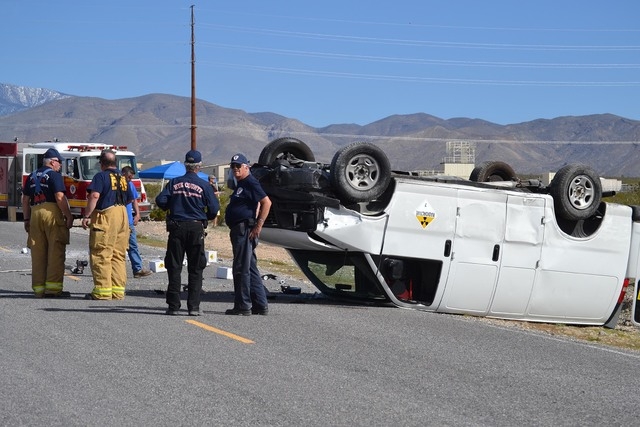 A training video to help emergency services prepare for a nuclear waste spill is being filmed in Pahrump.

The video, funded by the Department of Energy for their Transportation Emergency Preparedness Program, will be used to help train emergency services personnel nationwide to prepare for a nuclear waste accident or spill.

Payne said that in addition to video training modules, the Transportation Emergency Preparedness Program helps localities prepare for a nuclear waste spill in other ways. “They provide training, equipment and supplies,” Payne said.

U.S. DOE Environmental Management spokesperson Kelly Snyder said that approximately $12 million dollars has been allocated statewide based on the amount of nuclear waste disposed in the state since 2000.

Snyder said the DOE pays 50 cents for every cubic foot of waste disposed.

Payne said that a nuclear waste spill has not occurred in Nye County, to the best of his knowledge. However, ongoing training for a potential spill is imperative to ensure public safety.

High-level and low-level nuclear waste will travel similarly through the county, according to Nye County Nuclear Waste Repository Office Director Darrell Lacy. One difference, he remarked, is that “special nuclear materials,” or components that can be used in a “dirty bomb,” have secreted travel routes and travel with armed escorts.

All nuclear waste, Lacy said, is packaged in a safe manner for transport. Filming for the training video is expected to be completed today, March 13.