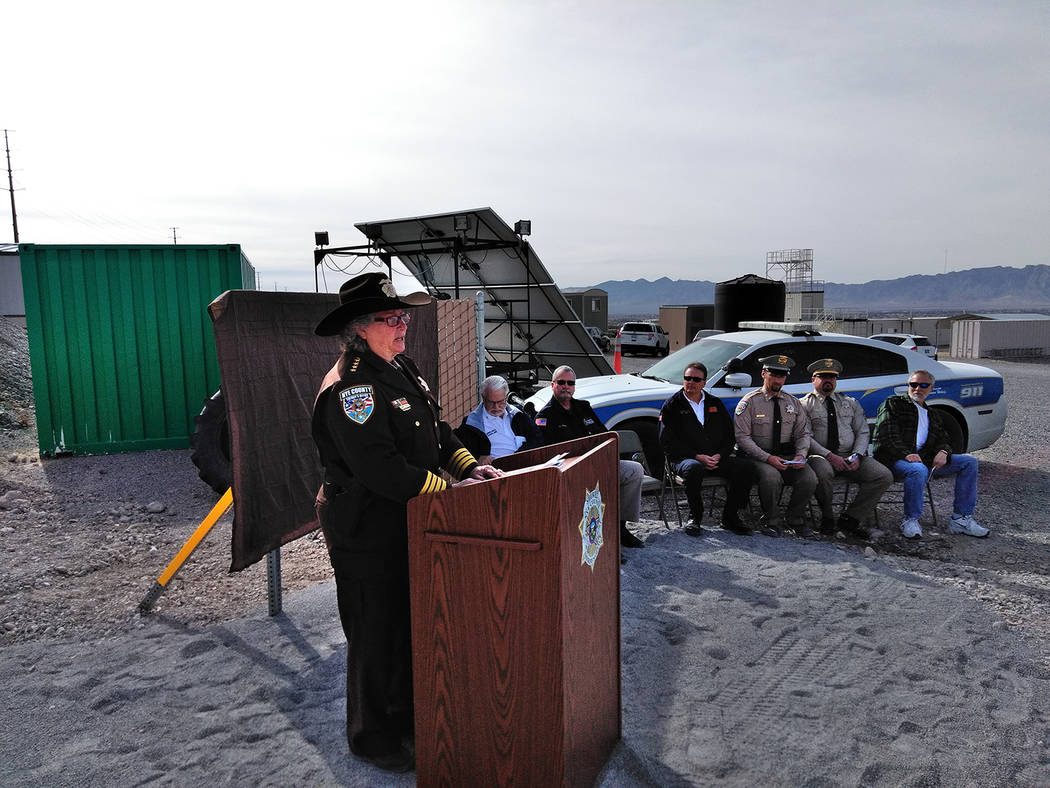 Selwyn Harris/Pahrump Valley Times Nye County Sheriff Sharon Wehrly addresses attendees at the grand opening of the Sheriff’s Office Target Range on Monday. The facility, for law enforcement agencies only, is located along East Mesquite Avenue on the northend of the valley. 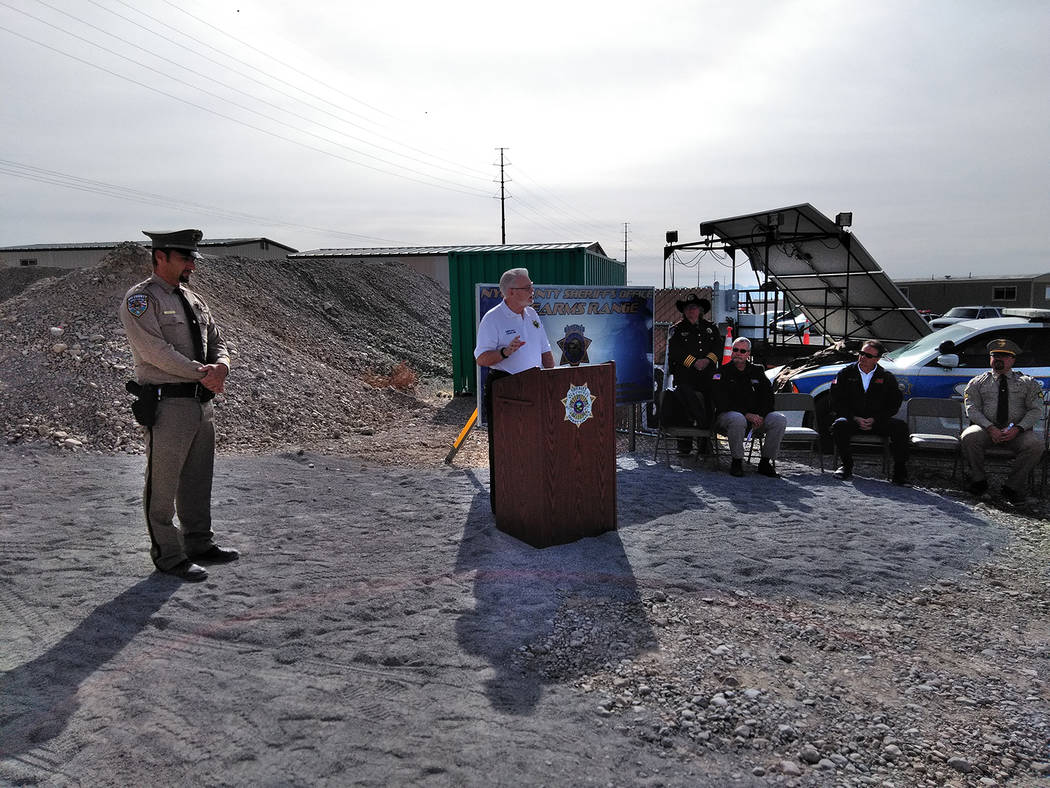 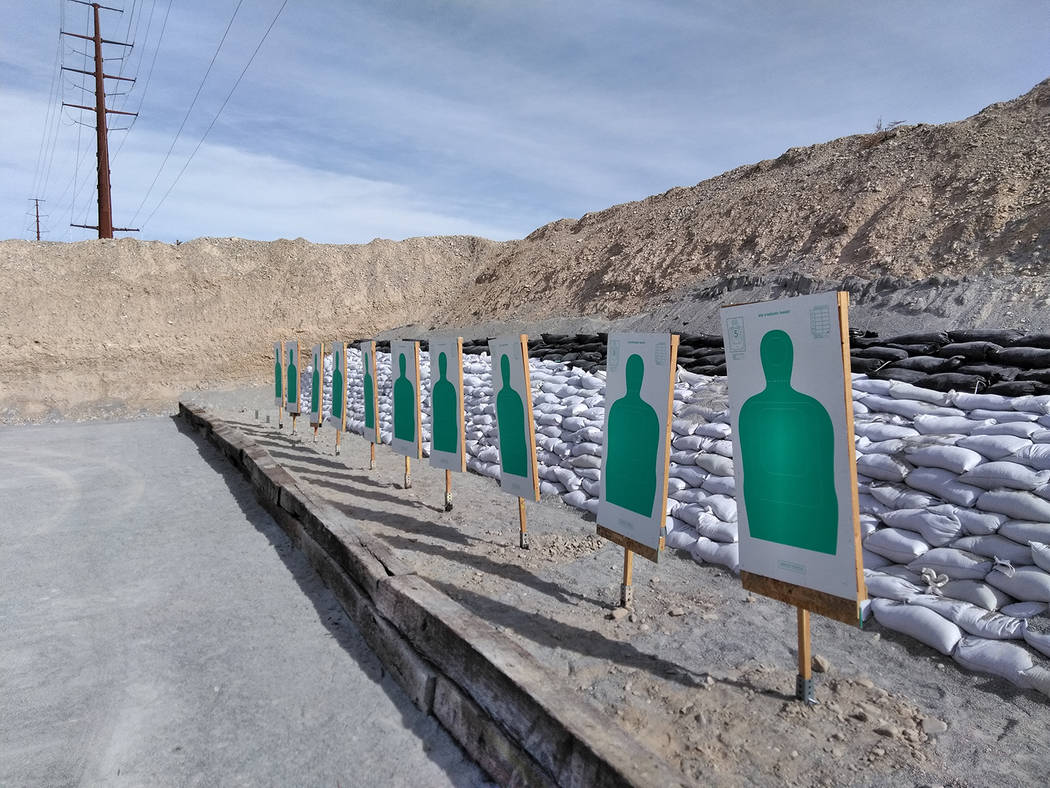 Selwyn Harris/Pahrump Valley Times Prior to Monday’s grand opening, local law enforcement personnel were forced to ask for help from outside agencies to use their target range facilities for firearms training. Nevada law states that any sworn officer is required to demonstrate proficiency with their firearm twice a year.

It sits on 10 acres of land just off of East Mesquite Avenue, and according to county officials, it was long overdue.

Several local media outlets were also invited to the unveiling.

Tippetts spoke about what deputies and top brass within the office were forced to endure, prior to the opening of the shooting range, including the travel involved to utilize other similar facilities in Southern Nevada.

“We have historically been forced to borrow, share and ask for help from outside agencies to allow us to use their facilities whenever we had requirements for firearms training,” he said. “For those of you who don’t know, Nevada law says that twice a year, any sworn officer is required to demonstrate proficiency with their firearm.

“Having to use facilities as far away as the Mercury Test Site, truly put a hardship on the Nye County Sheriff’s Office, in both manpower and finances. Now, thanks to the cooperation of several people, we finally have a range here locally that we can call our own and use whenever we need to.”

Payne also praised the efforts of previous county officials for their efforts and support.

“This is about nine years’ worth of work coming into fruition right now,” Payne said. “This site was the brainchild of former County Commissioner Gary Hollis originally. Nye County Emergency Management took the lead back in about 2007 or 2008 to begin discussions on this 10-acre parcel of land that we are sitting on right now. It is one part of a total 40 acres that the county owns. Another 10 acres adjacent to us, has already been dedicated toward future expansion on this site.”

Additionally, Payne told attendees it was an honor to be involved in the project over the years.

“Training sites are very rare because they are closing faster than they open,” he said. “The fact that Nye County, and in particular, the town of Pahrump, has a training site that we were even able to build, is particularly impressive.”

Moreover, Payne said the facility is not exclusively for the staff at the Nye County Sheriff’s Office.

“For those of you who may not know, this site historically since 2010, has hosted training for the United States military,” he said. “Every single branch, including the overseas Special Operations Units have used this facility. The FBI has trained here with their SWAT and Special Operations teams. The Nye County Sheriff’s Office has helped expand this site considerably. This has been a great partnership….”

Wehrly made sure to point out that construction of the facility was a multi-agency effort, including officials from Emergency Management, Public Works, Valley Electric Association, the sheriff’s office and other individuals.

“They came to donate their time and efforts to make this a reality,” she said. “In a world like this one is becoming, all we have is us. This tool will allow our personnel to train and maintain their proficiency with firearms and tactics to better serve our county, while remaining close enough within proximity of the valley, which is our largest population here in Nye County, to be here, and to be available when and if anything happens.”

“We are required by state law to attend to training and qualify twice a year,” she said. “In the distant past, we did have a firearms range up on Basin Avenue and it was known as the Sheriff’s Office/Search and Rescue firing range. When that range was in existence, we had people from all over come out here to have competition shooting. The NRA came out as well as the Nevada Test Site. We also had combat trials, which we haven’t done since the 1990s when that range went away and it was just lost.”

Prior to construction of the new facility, Wehrly said local law enforcement officials were forced to travel to other sites in order to train and demonstrate their skills.

Many times the training and drills were out in the open for prying eyes to catch a glimpse of their operations.

“When we go to shoot in order to qualify and train up until February, we had to go at least 48 miles, times two, or sometimes further than that, with outside entities watching our training and tactics. Now, we are here and thanks to everybody here today, we are able to train in a quiet, non-observable location and we appreciate that.”

Former Nye County Commissioner Frank Carbone told attendees that he was fortunate to have witnessed the planning and eventual construction of the site, since becoming a county official roughly four years ago.

“I’ve been able to watch what develops in this county,” he said. “One of the shining stars we have now, is this facility, for not only peace officers, but the fire department and other agencies who can train together as a unit when things need to be done as a unit. It’s kind of tough when you have police doing one thing and the fire department doing something else. Now both agencies have a complete training facility where everybody can come together and work together.”

In closing, Wehrly made sure to acknowledge those who helped to make the firearms range a reality in Southern Nye County.

“Again, I would like to thank Pam Webster and Tim Carlo, along with their respective staffs, including Frank Carbone, who was also instrumental,” she said. “Without his backing and without Commissioner Butch Borasky’s backing, we would still have just a dirt track up here. I also wanted to thank commissioners John Koenig, Dan Schinhofen, Donna Cox and Lorinda Wichman. We also very much appreciate our Valley Electric Association partners. To our detention staff, detainees and training staff, I also want to thank them for their efforts.”