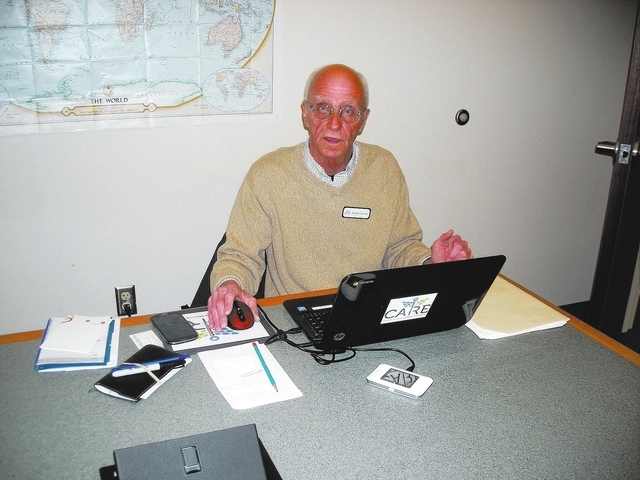 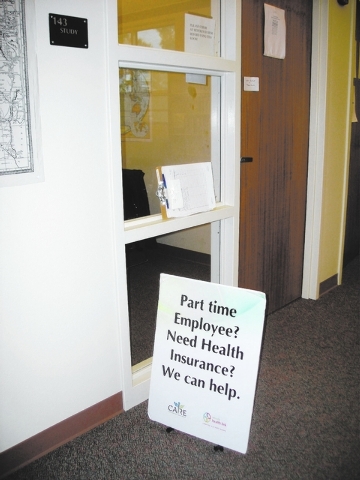 The press has been full of horror stories about the shaky roll out of the Affordable Care Act, commonly known as Obamacare, initially with examples of people unable to use the website, then later reports about policy holders being dropped by their private health insurance company, and still later, reports of large out-of-pocket expenses.

Fortunately, a live person is available each month in Pahrump to provide personal assistance. Randall Downey, an exchange enrollment facilitator with the nonprofit agency Consumer Assistance and Resource Enterprises (CARE), comes out from Las Vegas twice a month. Downey is given a back office at the Pahrump Community Library.

“That way we have privacy. We don’t want to share personal information with the public,” Downey said.

CARE workers also travel to 16 libraries in Clark County. Downey will be at the Pahrump Library Feb. 4, Feb. 25, March 4 and March 25. His first appointment is when the library opens at 10 a.m. and his last at 4 p.m.

“It’s been excellent, I’m usually fully booked every time I’m out here. We do it by appointment. If someone doesn’t show up, I can take a walk-in,” Downey said.

The organization Know Your Care provides assistance at the Beatty Medical Center. Their contact number is 553-2208.

Unlike the doom and gloom coverage in the media, Downey said the program has been working out well. He logs onto nevadahealthlink.com, the website for the Silver State Health Insurance Exchange, to enroll new clients. Downey said some of his clients are people who had trouble trying to enroll online at home, or people who aren’t computer literate at all.

“It’s been very successful. In terms of problems with the computer signing up, Nevada has a much better record than what people hear about the federal website. We still have issues, but we still have ways to deal with those in an expeditious fashion,” Downey said. “On an occasion we come to a dead end or they don’t have proper documentation so we reschedule them for a later date, then we wrap up at that point in time.”

Downey said since he began coming here twice each month beginning in October, he’s probably enrolled 50 cases; each case could include a single person, a couple or a family. People still have some misconceptions, he said.

“Many people are confused. I’m on Medicare what do I have to do? I gently inform them they’re fine. They don’t have to do anything because they’re fully covered by Medicare. If people’s incomes are quite low — and many are here in Nye County, I’m experiencing — we refer them to the welfare office for Medicaid,” Downey said. “I’d say about a third of the people I see are eligible for Medicaid.”

Nevada was one of the states that decided to expand Medicaid under the Affordable Care Act, which now includes people making up to 138 percent of the poverty level. A single individual making up to $16,000 per year can now qualify for Medicaid.

“People don’t understand the advanced premium tax credit system, that they’re eligible for a subsidy. So what I try to do when I introduce myself and we begin the process, I say let’s build a profile of you or you and your family so we can estimate what subsidy, for lack of a better word, you would be eligible for to lower your premium costs. Once that becomes clear then they understand where the affordable in the Affordable Care Act comes from. Then we’re able to guide them to different plans they might prefer, that would suit them,” Downey said.

Downey said he takes clients at their word when they give their annual income, but the website is linked up to Social Security, the Internal Revenue Service and Homeland Security. If someone gives a lower income than is shown, that prompts further questions. Downey said they could have been laid off from their job.

Then there are different plans with different companies selling insurance under the Affordable Care Act. In Southern Nevada, these include The Nevada Health Coop, which Downey said was a nonprofit created by the Culinary Union, Anthem Blue Cross and Health Plan of Nevada.

“There are actually about 39 plans all totaled if you add them all up,” Downey said. “Each company offers several plans at each level. So the deductibles vary and the premiums vary accordingly. So people have a way to choose.”

“They may choose a silver plan because in certain instances based on their income they could be eligible for what’s called CSR, cost share reduction, which is a formula the federal government will apply based on people’s income to lower their co-pays from the listed co-pays in the benefit of any particular plan. So that’s further savings that could accrue if they choose a silver plan. But many people are opting for the gold or the platinum, they’re willing to pay a higher premium to eliminate or almost eliminate those deductibles and the plans pay more,” Downey said.

Downey said it can take 45 minutes to an hour and a half to do an interview. “If it’s a large family with a number of children, it takes much longer because we need information from each individual. It’s gathering the data that eats up the time,” he said.

Downey said he hasn’t seen that many cases in Pahrump of people who were dropped by their insurance carriers, but he has elsewhere in Southern Nevada. Downey said switching to Obamacare doesn’t always result in higher premiums and less coverage. “We’re actually finding we can provide oftentimes cheaper coverage, more comprehensive at a smaller price,” he said.

“That was integrated into Medicare a number of years ago but it’s now mandatory for all plans in the private market or through the Nevada Health Link marketplace, preventive services. There’s a growing list of what those are, free of charge to the consumer: mammograms, pap smears, colonoscopies are free of charge, cancer screening, diabetic screenings are free of charge, just to name the most obvious,” Downey said. He added, “it’s mandated that all plans now have to cover comprehensively prescription drugs, generic, brand names, preferred brand names, non-preferred brand names and then some of the biologics and experimentals as well.”