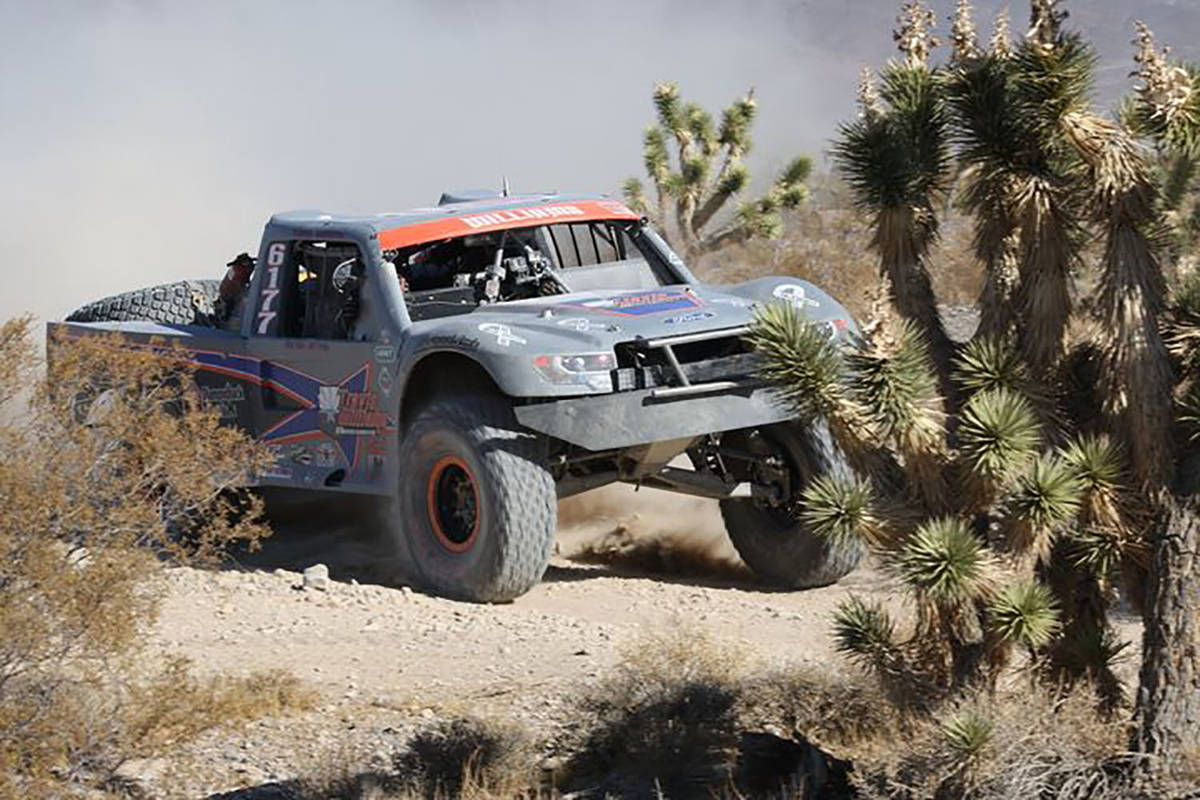 Tim Harrison/Special to the Pahrump Valley Times Travis Williams, of Avondale, Arizona, competes in Class 6100 at the Desert Showdown on Jan. 9 in Pahrump. Williams won his class, covering the 215-mile course in 3 hours, 20 minutes, 6.429 seconds. 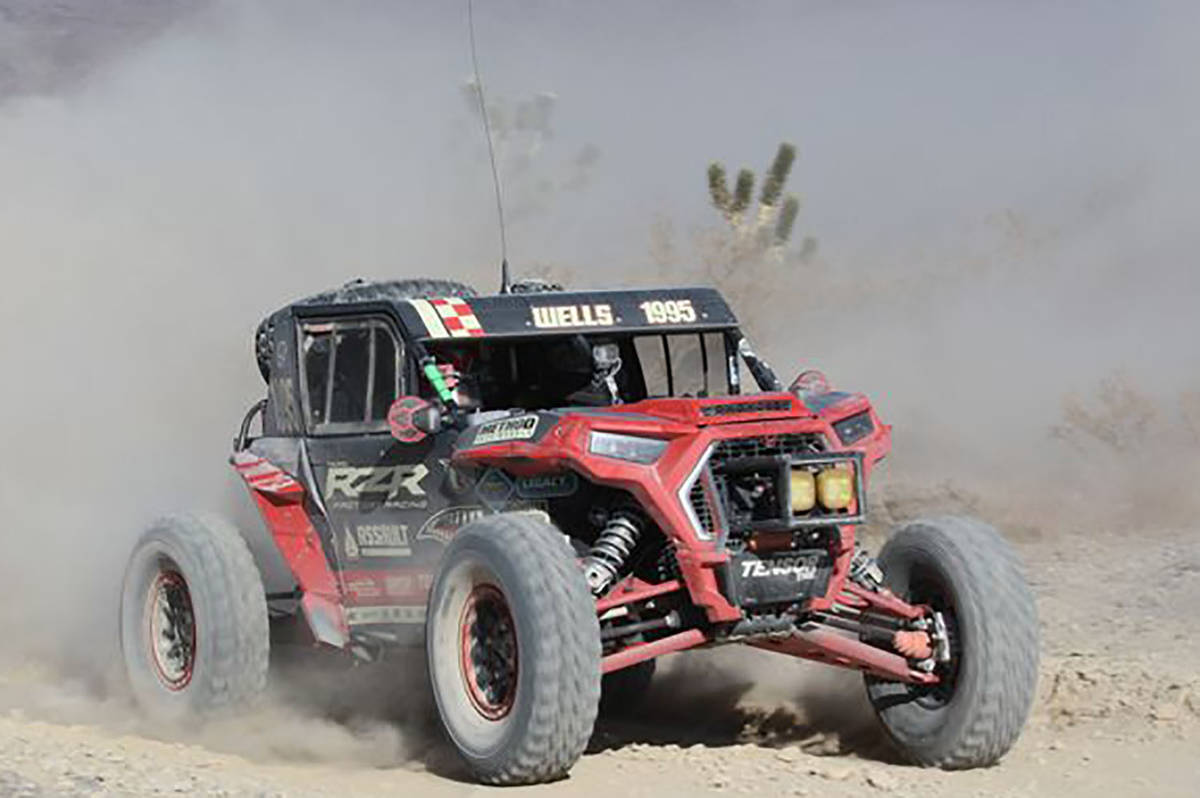 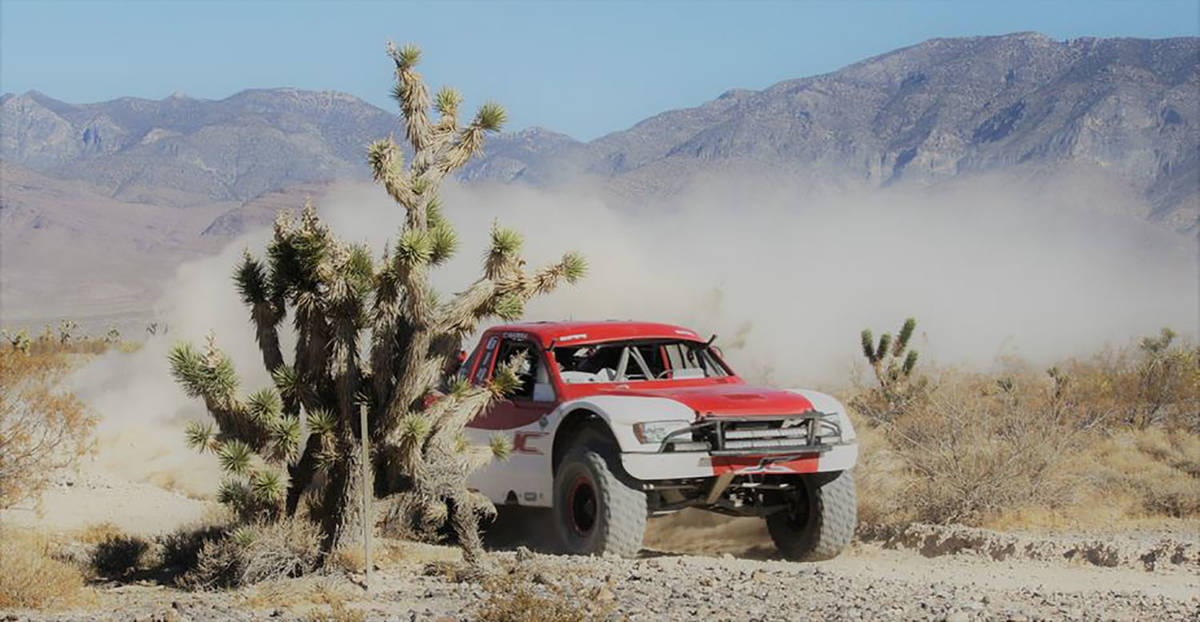 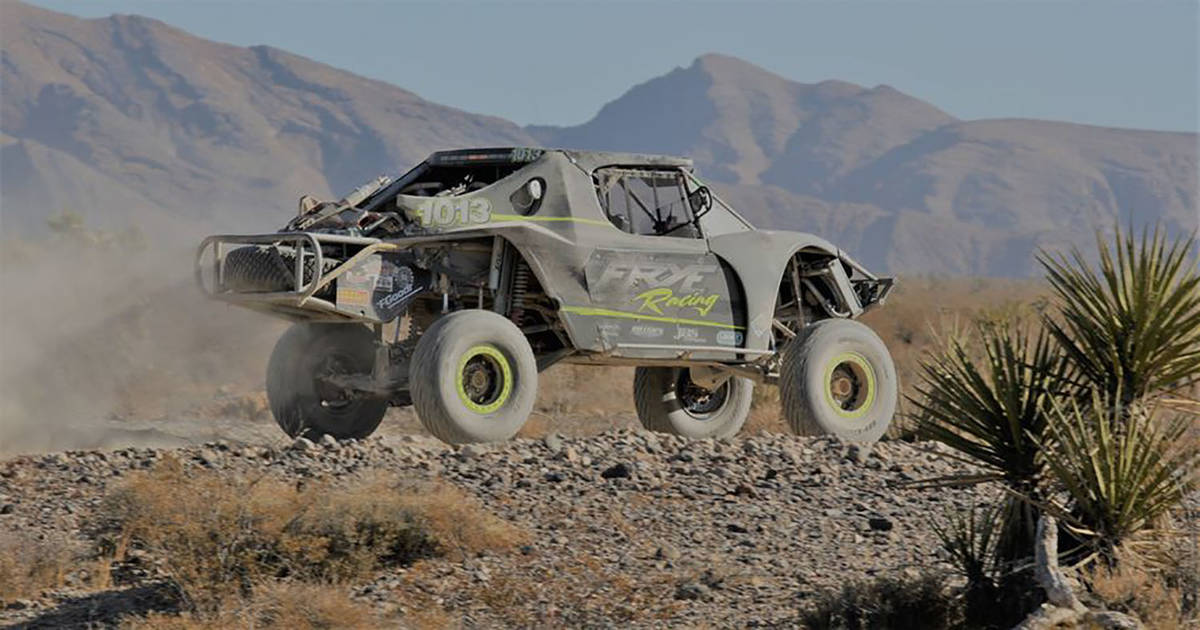 Tim Harrison/Special to the Pahrump Valley Times It was a rough day for Mike Frye of Las Vegas, driving in Class 10 of Legacy Racing's Desert Showdown on Jan. 9 in Pahrump. Frye finished the 215-mile course in 4 hours, 51 minutes, 20.182 seconds, more than an hour after first-place Brent Fox of Highland, Utah.

There’s a new off-road racing circuit around, and Pahrump hosted its inaugural event.

Legacy Racing Association kicked off its five-race season Jan. 7-10 with the Desert Showdown, a 215-mile race which drew 76 cars, trucks and UTVs and 250 racers, according to Liz Marshall, Legacy Racing’s event director.

“Myself and my partners have worked in off-road racing for quite a while, and we’ve been in Pahrump before but not with our organization,” said Marshall, adding she has been involved in motorsports for 12 years while it has been 16 years for race director Donald Jackson. Jackson’s wife, Kristy, is listed as Legacy Racing’s manager. “We like the area, and the Pahrump Nugget is super-accommodating.

“We love the course there. It’s a little challenging, a little rocky. It’s a fun area to race in.”

So much fun that Legacy Racing will be back. After the Hare Scrambles for motorcycles and quads scheduled for Feb. 5-7 in Laughlin, the Baja Nevada will be run over two days in May, starting in Alamo, overnighting in Tonopah and finishing in Pahrump. This is the only one of the five races on the schedule that will include motorcycles, quads, cars, trucks and UTVs.

And that’s why racers will travel great distances to drive in these races.

“It’s always been that way,” Marshall said. “I think people like off-road racing, and there’s not a lot of desert in some locations, so you’re willing to travel to do it.”

There were more Californians in the Desert Showdown than drivers from any other state, but Utah, Arizona, Texas, Alaska, Alabama, Massachusetts, New Mexico and Wyoming were represented, as was Nebraska, home of overall winner Steve Strobel, who completed the course in 3 hours, 15 minutes 41.519 seconds.

Marshall said that Legacy Racing’s initial race was received well by pretty much everybody.

That reception lends credence to Marshall’s belief that there is plenty of room for another off-road racing circuit.

“We want to provide more off-road racing to the drivers,” she said. “I don’t think there can ever be too much racing, and we feel like it’s a new avenue for people to race in. Just kind of bring some new life into off-road racing.

“I think that there are new people coming out to off-road racing looking for somewhere to go, and there are racers that have been racing for years looking for new and different things to try.”

That’s more or less the mantra of Legacy Racing, or, as it reads on the company’s website: “By proudly announcing their commitment to continue their passionate careers in off-road motorsports, the founders have taken a fresh look at organizing, hosting and promoting world-class championship-caliber off-road races.”

One key part of that is drivers don’t have to choose; they can compete in races sponsored by more than one circuit.

“If you look at our entry list compared to other organizations there is some crossover,” Marshall said. “We have only five total races, and a lot of our racers want to spend more time out in the desert.”

Holding any event during a pandemic presents its own challenges, to say nothing of starting something new during a pandemic. But Marshall said Legacy Racing followed all guidelines and recommendations for the Desert Showdown.

“There was a little bit of uncertainty,” Marshall acknowledged. “You never know what’s going to happen, what may get shut down, what may get rejected. But we followed all CDC guidelines, kept our footprint to a minimum and encouraged racers feeling sick to stay home.

“We did everything that we could to keep everybody safe and healthy and pull off a good event.”

And with the backing of national sponsors — and Haddie’s gas stations/convenience stores/car washes in Las Vegas — the first one went off well. But Legacy Racing is just getting started.

“We’re in Laughlin next month, in May it’s our Alamo to Tonopah to Pahrump, in September we’re going to be in Cedar City, and in December we’ll be in the Las Vegas Valley,” Marshall said.

Motorcycle and quad drivers still have time to register for the Hare Scrambles, a 100-mile race near Laughlin. Draw for start positions will be Jan. 26. For more information, visit https://www.legacyracing.net/hare-scrambles-laughlin