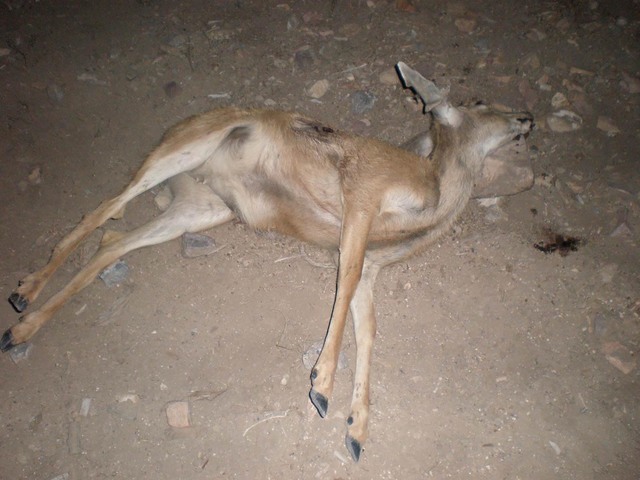 This mule deer was killed and left to rot in the Spring Mountains by a hunter or hunters now being sought by state game wardens on poaching and other charges. Courtesy of Nevada Department of Wildlife

State wildlife officials are searching for a poacher or poachers who illegally killed eight mule deer and left them to rot near Mount Charleston.

According to Nevada Department of Wildlife spokesman Edwin Lyngar, the deer were killed over a three-week period in September and found by game wardens late that month.

The discarded animals were discovered in several places along Wheeler Pass Road on the western slope of the Spring Mountains. The deer were killed within a state-designated hunting unit that covers the entire mountain range, but not during rifle season.

Game wardens believe the incidents are related, but they don’t know whether they are looking for one individual or multiple shooters.

Big game poaching is a felony in Nevada. In a few cases, the antlers or small amounts of meat were taken, but most of the deer were left intact in violation of state laws against wasteful hunting.

“I literally do not have the words to fully explain my disgust at this crime. It takes a special kind of person to illegally kill eight mule deer and then to leave them to rot,” Tyler Turnipseed, Nevada’s chief game warden, said in a written statement. “I know I am not alone in my anger, and that’s why we are asking the public for its help in solving this case.”

A $3,000 reward is now being offered in the case through the Department of Wildlife and Operation Game Thief, which operates a toll-free, anonymous tip line for wildlife crimes.

Operation Game Thief’s volunteer board provided the reward money as part of its mission to solve poaching cases.