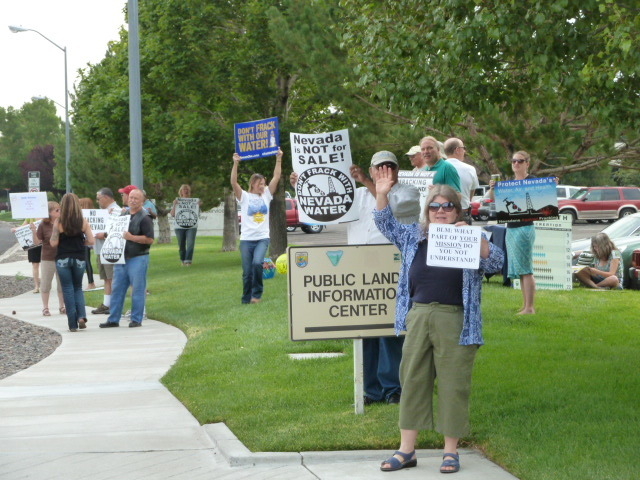 RENO — Quarterly auctions of oil and gas leases are normally routine affairs, but the auction last Thursday drew protests of fracking at the U.S. Bureau of Land Management office from residents just across the Lander County line.

More than 30 people hoisted signs displaying their opposition to hydraulic fracturing, a technique where a water, fracturing fluid and propping agent are injected into the hydrocarbon bearing formation under extremely high pressure to further open existing fractures or create new fractures, permitting hydrocarbons to more readily flow into the well bore. It makes some sand and shale formations now workable for oil.

The BLM sold 27 of the 102 parcels up for auction in the Battle Mountain District, which extends into northern Nye County. All but one parcel were bought up by American General Energy Exploration Corporation out of Austin, Texas.

All 102 parcels received protests, but none were withdrawn due to protests. All the bids came in at the minimum $2 per acre. The highest bid was $5,120 for a 2,560-acre parcel.

“We believe the costs of fracking far outweigh the perceived benefits,” said Dawn Harris, a spokeswoman for the group Nevadans Against Fracking. “The farmers, ranchers and families that live in Reese River Valley are at risk of losing their livelihoods and way of life.”

Nevadans Against Fracking are concerned chemicals injected with the water during the fracking process may pollute the groundwater and fracking may increase the chances for earthquakes. Air pollution is also a concern.

The protesters asked Gov. Brian Sandoval to keep fracking out of Nevada, but Sandoval has supported fracking with appropriate safeguards. “I support (fracking) as long as it is done in conjunction with and subject to the review of the Department of Minerals,” Sandoval said last week.

Nevadans Against Fracking had asked a federal judge to block the sale after the environmental analysis showed energy exploration resulting from the sale of the leases would have little or no impact across about 270 square miles of Lander, Nye and Esmeralda counties.

While Nevada’s limited oil production has been primarily in Railroad Valley in the northeastern corner of Nye County, the citizens group said a recently discovered shale deposit, the Chainman formation, running from southern Nevada north through the eastern one-third of the state, could become one of the nation’s most valuable, according to a University of Wyoming energy economics professor.

The Lander County Commission and the Center for Biological Diversity filed protests over the lease sales, around Big Smoky Valley between Austin and Tonopah.

The lawsuit was filed on behalf of ranchers, alfalfa farmers and others that said fracking could suck millions of gallons of water from the high desert, undermine the region’s seismic stability and pose a threat to wildlife. The vast majority of parcels, 78, up for lease were in the Big Smoky Valley hydrographic basin.

Half of the $137,472 collected goes to the state of Nevada. Leases are issued for a primary term of 10 years, they continue beyond that time as long as oil or gas is produced in paying quantities. If a lease is producing, a royalty of 12.5 percent is levied. Bidders may not purchase more than 246,080 acres of public land.

The environmental assessment said there wouldn’t be direct impacts to groundwater from the auction, because development activities would be analyzed under a separate, site-specific environmental analysis.

The Tonopah Resource Management Plan states the extremely complex geologic structure of the area has limited the success rate of wells to 28 percent, within defined oil fields the success rate is 60 percent. The BLM projects modest amounts of oil and gas exploration are expected to continue in the Battle Mountain District over the next 10 years, even with the current technological advances in hydraulic fracturing.

A BLM white paper on fracking said the process is unlikely to directly affect freshwater aquifers because fracturing typically takes place at depths of 6,000 to 10,000 feet, much deeper than drinking water aquifers, which are typically shallower than 1,000 feet deep. Fractures created haven’t been shown to span the distance between the targeted oil formation and fresh water, the report said.

Fracking could create seismic activity, but the white paper said only a small fraction of activities at hundreds of thousands of energy development sites in the U.S. have inducted seismic activity at levels noticeable to the public.