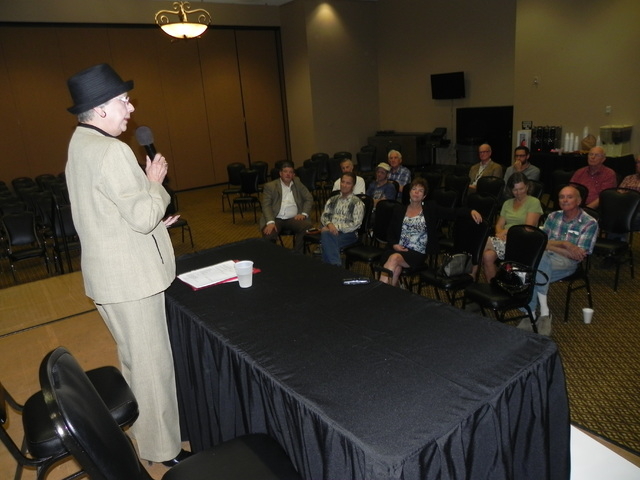 Ballot question No. 3 simply asks: Shall state law be amended to create a 2 percent tax on a margin of the gross revenue of entities doing business in Nevada with total revenue for any taxable year that exceeds $1 million, with the proceeds going to the State Distributive School Account to be apportioned among Nevada school districts and charter schools.

In reports filed with the Nevada Secretary of State last week the Coalition to Defeat the Margin Tax Initiative reported raising more than $4 million since the beginning of the year and spending $3.3 million, flooding the television airwaves with commercials including celebrities like former Las Vegas Mayor Oscar Goodman and AFL-CIO Executive Director Danny Thompson.

A poll released Oct. 2 by the Las Vegas Review-Journal reported 40 percent of those surveyed would vote against the Margins Tax but 37 percent would support it and 23 percent were undecided.

Just in case people didn’t get the message pushed by the proposal’s critics, Nevada Taxpayers Association President Carole Villardo, spoke fervently against the measure to a small group of businessmen at the Pahrump Nugget Hotel and Casino on Oct. 15.

“I will speak to three people in a phone booth about the dangers of this initiative because one, you have the potential of a slowing economy, you impact jobs and we need to keep those jobs and we need to increase the jobs. We need to be able to go back and start doing some capital investments and this is not going to do it, it’s going to be chilling,” Villardo said.

“Here’s what’s scary. A lot of people don’t read a sample ballot. They read the question,” she said. “You support it because it’s the proverbial motherhood and apple pie with education and it fits very well into this disclaimer: don’t tax you, don’t tax me, tax the fellow behind the tree. So as that individual voter I don’t have to pay for this wonderful deal that’s going to give us more education funds.”

Opponents claim it won’t necessarily mean more money for education, though the proceeds will go into the state Distributive School Account for education.

Villardo said people with affiliated companies won’t escape the tax, because the initiative defines affiliated companies. She said companies can take deductions, including compensation, which includes vacation pay, retirement pay and any benefits that have to be reported. Businesses can also deduct the cost of goods sold, what retailers will use.

“You can then take 30 percent. Everybody knows the economy that we have lived through over the last four to five years and the fact that for about 18 months we are coming out of it, so a lot of our businesses are still struggling, just trying to keep their heads above water. Many of them have still not hit the point where they’re profitable,” Villardo said.

“And guess what? I owe it if I have a profit, if I have no profit. This is the best one, if I’m in a bankruptcy. That is not dischargeable under Nevada law,” Villardo said.

If the Distributive School Account that funds education has $2 million and needs $3 million, the Margins Tax will generate $800,000 to make up that deficit, she said.

“I have no provision in the bill that says you must maintain the current level of funding. So the state will be able to do what they want with it,” Villardo said. “The fact to me that is problematic because how do I track? How do I know that this is going to improve the educational system? I don’t.”

The funds can’t be used to build facilities, she said, which are restricted to local bond issues. Nye County ballot question No. 1, which asks voters to allow the local school district to continue issuing general obligation bonds to finance acquisition, construction, improvement and equipping of school facilities, at a local school tax rate of 58.5 cents per $100 of valuation.

The Nevada Department of Taxation expects to have to hire 100 new auditors to deal with the complex filing requirements on forms that are nine pages long, Villardo said.

“Most of the businesses I know that can afford to absorb the tax they will. They want to maintain the good will of the customers. However if you cannot afford to absorb the tax, to the extent your competition allows, you’ll increase your prices and so that gets passed on,” Villardo said. “Remember we’re going to be dealing with Obamacare for employees come Jan. 1st and we have, as memory serves me, $68 per employee. If you have over 50 employees that you’re going to have to pay so what do you think that does with economic development?”

Since Nevada signed a deal with Tesla, offering 20 years of sales tax abatements and 10 years of property tax abatements in return for the building of a battery “gigafactory,” Villardo said she’s aware of four major companies that want to come to Nevada but are postponing their decision until after Nov. 4.

Villardo said a Texas margins tax bill, upon which this one was patterned, was a lot cleaner because they expanded on an already existing franchise tax and still generated 140 lawsuits.

Auto dealer Tom Saitta said passage of the margins tax would cause him to close his Pahrump dealership.

“I’ve now lived here 12 years, I love it here. I have 48 employees that have over 200 family members that will be affected drastically if this happens,” Saitta said. An auto dealership sells expensive items, namely cars and trucks, he said.

“My gross receipts last year approached $60 million,” Saitta said. “We’re not the rich people some people think we are, car dealers. If this margins tax had been in place, our company, owned by myself and Don Trudeau, we’re partners. We would’ve lost close to a quarter of a million dollars.”

Without an ability to control his cost, Saitta said all he can do is raise prices.

Villardo said a margins tax bill was first introduced in 2007 when it would’ve been an 8/10th percent tax but was rejected by the Legislature. In the 2011 session the bill didn’t make it out of committee. Supporters circulated an initiative petition this year which qualified for the ballot with three times the number of signatures, she said.