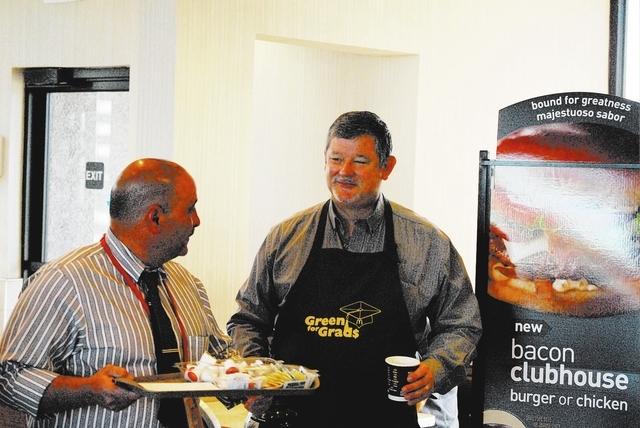 Republicans who were in the minority gained a 27-15 majority in the Nevada Assembly after the Nov. 4 election, placing the party in charge of chairing the committees.

Oscarson, who was re-elected to his second term without opposition, said members of his committee are still being appointed.

“It’s a great honor to be able to be appointed as chairman of that committee,” Oscarson said. “I’m excited at being able to serve in that capacity. That committee has a lot of responsibilities, it has jurisdiction over a wide range of topics related to public welfare, public health and safety, mental health, food inspections and other commodities. It’s a huge responsibility, a huge thing I’ve been tasked with and I welcome it with open arms.”

Oscarson was marketing director for Desert View Hospital and still works for the hospital on community services. Oscarson said he’s been involved in the health care industry for 25 years and was formerly a nurse.

“All those things combined I think have ensured that my ability to understand the health care issues of the State of Nevada, both urban and rural hopefully make me a good fit for this opportunity,” Oscarson said.

The chairman will organize meetings, put together agendas and have discussions with groups about how the committee can affect legislation, he said. Requests for the committee to adopt bill draft requests for the 2015 Legislature which convenes in February will be examined on a case-by-case basis.

“I think it’s important that the rurals are represented there and certainly as to my constituents I’m going to represent the rurals,” Oscarson said. “There’s going to be huge challenges with the mental health system. Those are the things we’re going to have to monitor.

“I’m going to work with the insurance commissioners and insurance companies so where there’s services they don’t have to drive 120 miles or 200 miles round trip to get those services. That’s a priority for me.”

Oscarson said medical marijuana will be largely in the hands of the judiciary committee, but the health and human services committee will continue to work with Nevada Health Link, the state’s version of the Affordable Care Act, or Obamacare.

“A lot of it hinges on what the federal government does. There’s a few challenges in the federal system now,” Oscarson said of the state-run program. “Those issues will certainly fall under health and human services.”

In speaking about the Republican takeover of the Nevada Legislature, Oscarson said, “I think it allows us a huge opportunity.”

“We’re going to move forward with some of the things we’ve not been able to do in the past. That being said I think we’re going to continue to reach out and do the best for the future of Nevada,” he said.

Oscarson said he thinks Assembly Speaker Hansen, who represents a neighboring district that includes northwestern Nye County and part of Tonopah, will be a dynamic leader who’s already shown tremendous leadership and respect for the process and the system.

“He has rural roots, rural Nevada roots and represents a major part of rural Nevada,” Oscarson said. “We can all benefit from his leadership.”