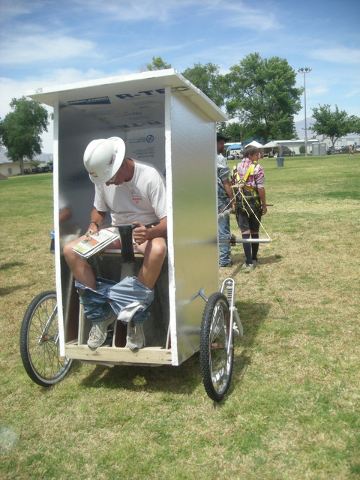 Starting today, exhibit hours run from noon through 10:30 p.m., but a kick-off event will officially start the festivities.

Bluegrass music will be played every hour until 7 p.m. by different groups leading up to the headliner Friday night.

“Dean West comes on stage (at 7 p.m.) and I know a lot of our locals love Dean West and his country music,” event organizer Paula Elefante said.

The melodrama, “A Golden Fleecing,” put on by the Shadow Mountain Community Players, will also take place throughout the three-day event, with first show Friday at 7 p.m. Doors at the Bob Ruud Community Center opening at 6 p.m. There are matinee showings at 2 p.m. on Saturday and Sunday which run $5, with the evening shows on Friday and Saturday at 7 p.m. costing $7.

Saturday morning beginning at 9:30 a.m. there will be a parade featuring a 20-mule team that will be hitched up to wagons, and cars that are pre-1930, which will travel along Highway 160 between Highway 372 and Basin Road.

Traffic will be closed on Highway 160 during the parade, which should last no longer than one hour. So if you need to get to one of the businesses along that stretch, plan to use an alternate route.

Saturday at 10 a.m. the bluegrass music starts up again, and will play on the hour, like Friday.

The event that a lot of people are looking forward to is the second annual outhouse race, which begins at 11:30 a.m. Saturday morning.

It will kick off with a rematch from last year, as there was a close finish, and the teams want to settle the score.

“Teams from the Board of County Commissioners and the Arena Committee will face off in a grudge match,” event organizer Carlton McCaslin said. “They had a fight last year over who actually won. The two outhouses crashed into each other, but (Commissioner) Frank Carbone claims that his foot was across the finish line before they crashed.”

Following that, this year’s version of the outhouse races will conclude with the winners of Saturday’s preliminary rounds facing off on Sunday for the title of, “King of the Throne.”

All participants must create an outhouse that is at least four feet tall from floor to roof, be made out of any material they want, cardboard is suggested.

Also, all outhouse must have a toilet bowl and at least one roll of toilet paper.

Outhouses may not have a motor or pedals, and must be pulled or pushed, depending on the team’s own discretion.

One member must remain inside the outhouse throughout the race. All participants must be 18 years of age or older.

The late Bob Baker is considered the pioneer of the Wild West Extravaganza. Baker, who lived in Pahrump, died in 2011, but many in town say they are still inspired by Baker’s hard work and love for the community.