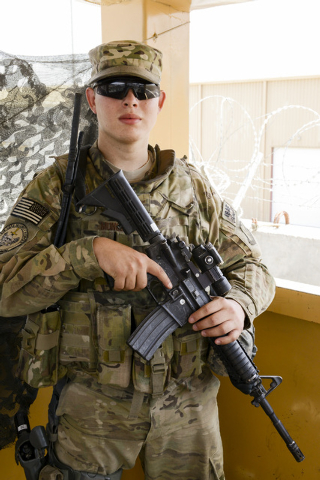 Carol Munger feared the worst when she watched the news at her Pahrump home July 17 and saw that Taliban militants had attacked a base near Afghanistan’s Kabul International Airport where her son, Airman 1st Class James Munger, is stationed.

“My heart sunk,” she said, recalling how thankful she was that he called not long after to ease her fears. “My first thought was, ‘Thank you, Lord,’ for having my son call me so I didn’t have to worry and so he wasn’t hurt and nobody was hurt on his side.”

In an interview Monday from Kabul, 20-year-old James Munger, a security forces airman, described the attack in which the militants fired rocket-propelled grenades and machine guns from a building that was under construction near the airport.

Noise from gunfire woke him up. “I thought it was somebody slamming the door. Then I heard the loud speaker go, ‘Incoming!’”

He said he “threw on my pants and boots,” grabbed his 9mm pistol and M-4 assault rifle and ran outside to join a sergeant. Bullets whizzed over their heads as they approached a watchtower that was less than 400 yards from the building where the fighters were holed up. The Taliban had claimed responsibility with news reports saying they were trying to disrupt an audit of election results.

Munger said he wondered, “Is this going to be my last day alive?”

Then he thought about his buddies in the observation tower, not far from the Afghan air base that was the target of the attack near the international airport. “You hope they make it out, just like you make it out.”

Munger was directed to another tower that was outside the main line of fire. “I was disappointed at first, because I wanted to be in the fight,” he said. “But I found a way to help. I grabbed a spotting scope and started calling out their positions to our guys closer up.”

Over four hours, the insurgents fired 20 rocket-propelled grenades, detonated a vehicle-borne improvised explosive device and shot automatic weapons from windows and the building’s roof. Munger and his security forces teammates from the 438th Air Expeditionary Wing managed to suppress the attackers with return fire so Afghan national soldiers from a quick-reaction force could enter the building and kill four militants.

“I saw a mortar hit right in front of Tower 2 and explode. I was so scared for the ones in Tower 2. All the security forces here are family, but some of my closest friends were in that tower,” he said.

Carol Munger said she and her husband, Bill, a Navy electrician during the Persian Gulf War, “couldn’t be more proud of him. I didn’t want him to go into the service but it’s been a great life choice for him. He signed up for six years to serve our country.”

James Munger graduated from Pahrump Valley High School in 2011 and joined the Air Force after having first attended Great Basin College in Pahrump.

He deployed to Afghanistan from Al Dhafra Air Base, United Arab Emirates. His home station is Cannon Air Force Base, N.M., where he is assigned to 27th Special Operations Security Forces Squadron.

Munger’s forward operating base is one of a number of U.S. military and NATO International Security Assistance Force bases around the airport, about 10 miles from the center of Kabul.