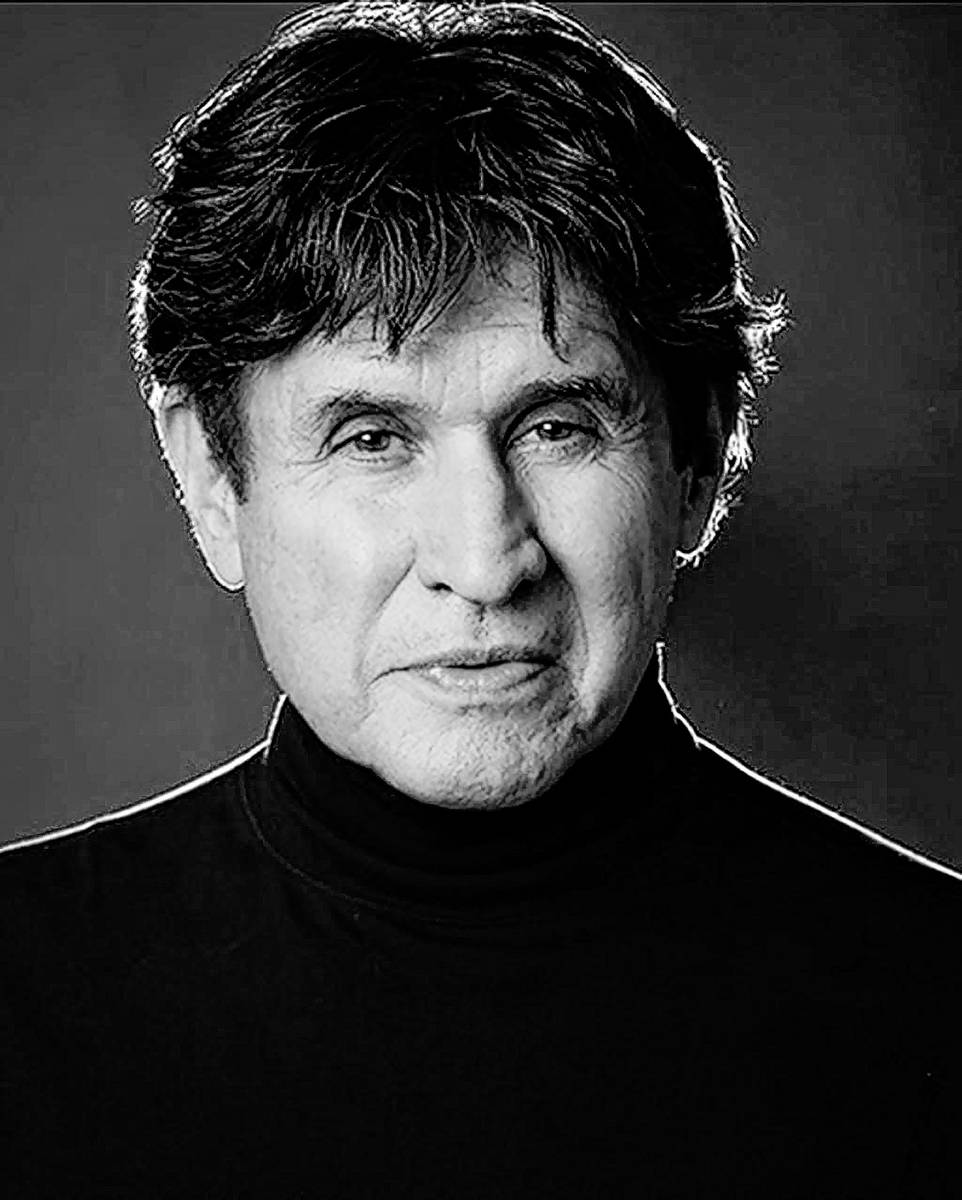 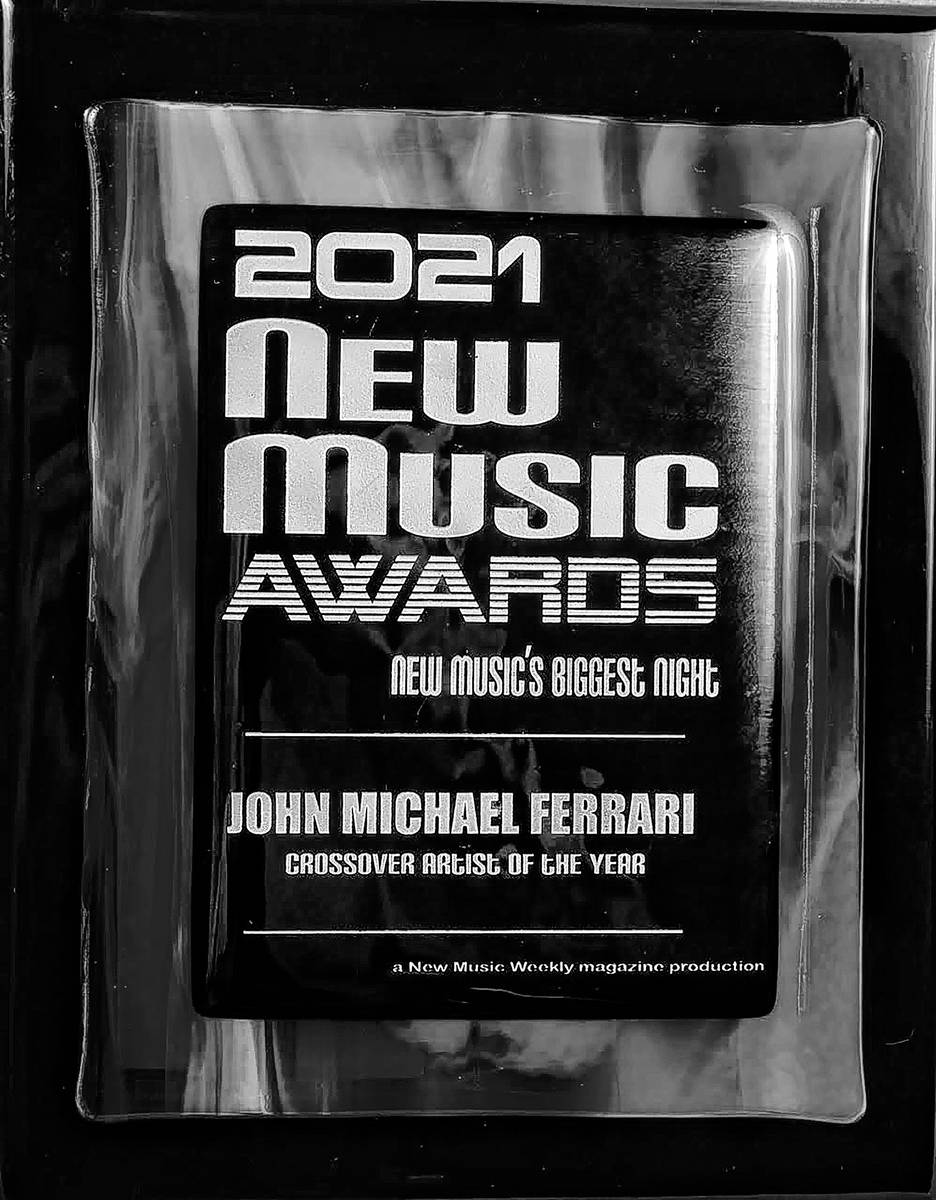 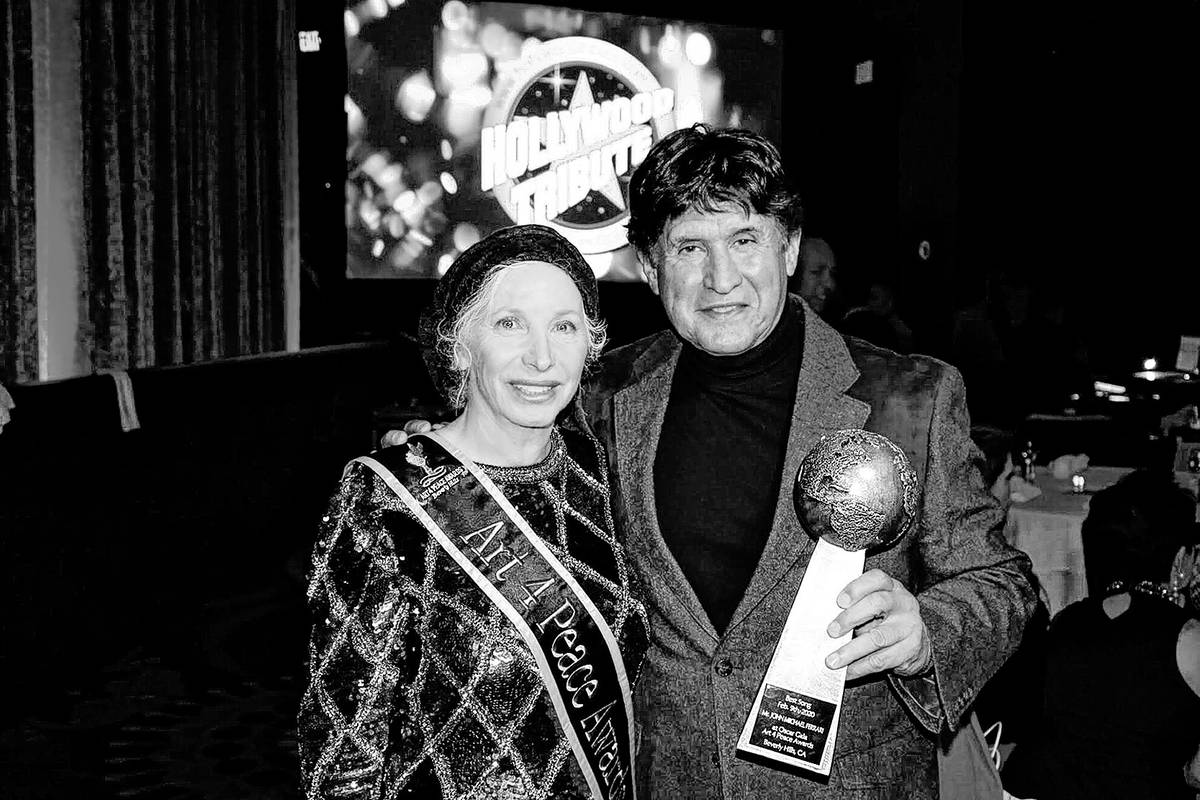 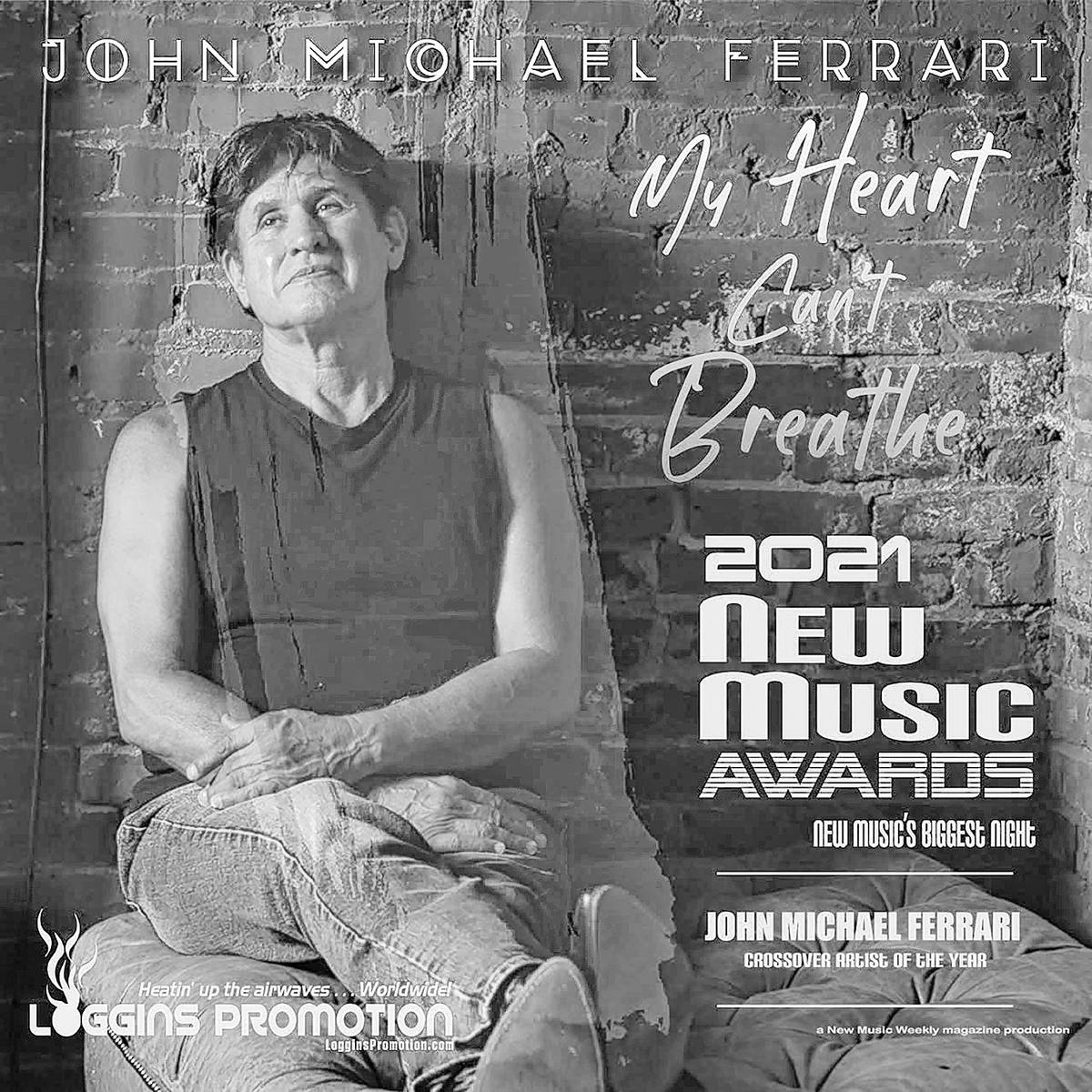 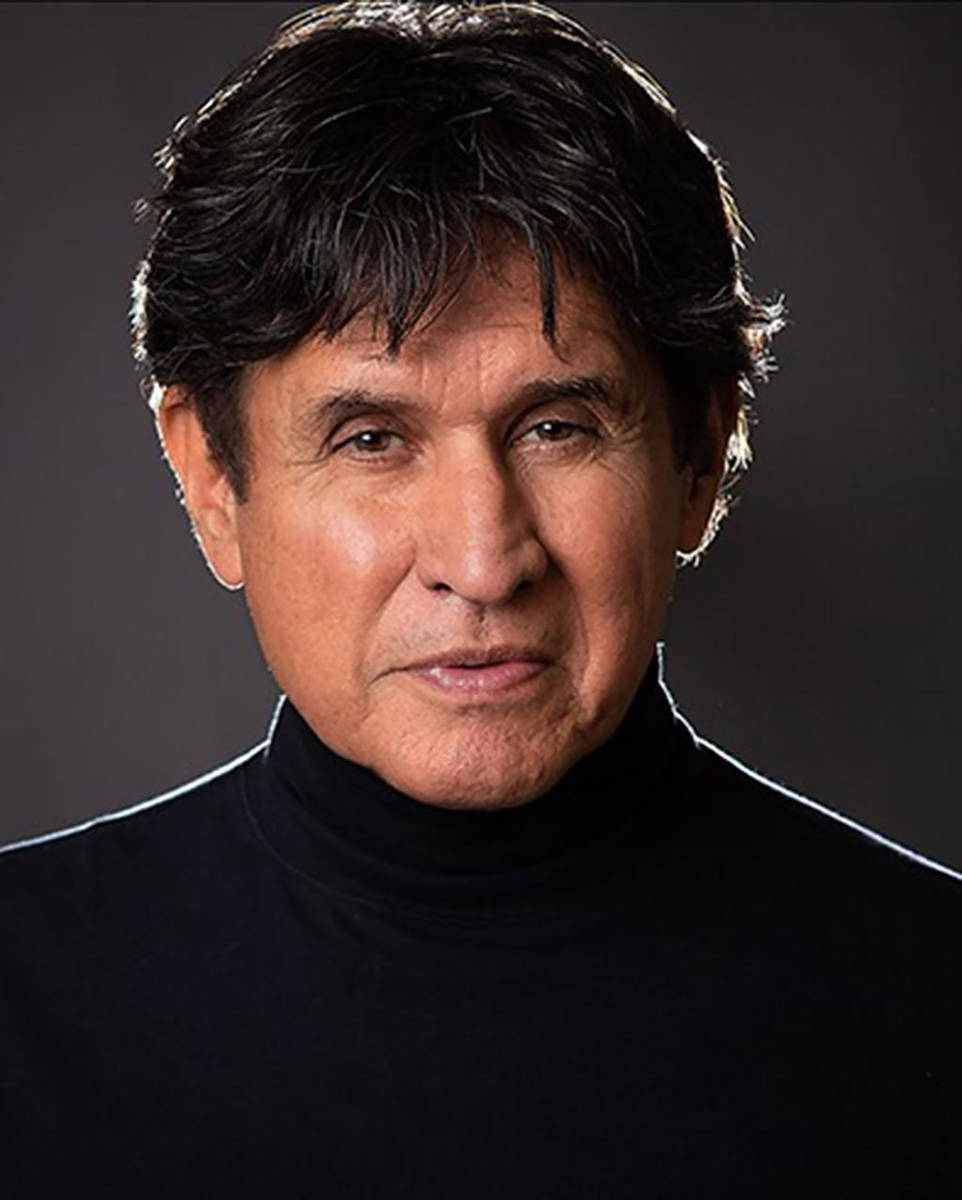 Special to the Pahrump Valley Times Award-winning singer-songwriter John Michael Ferrari is set to release his newest single next week. 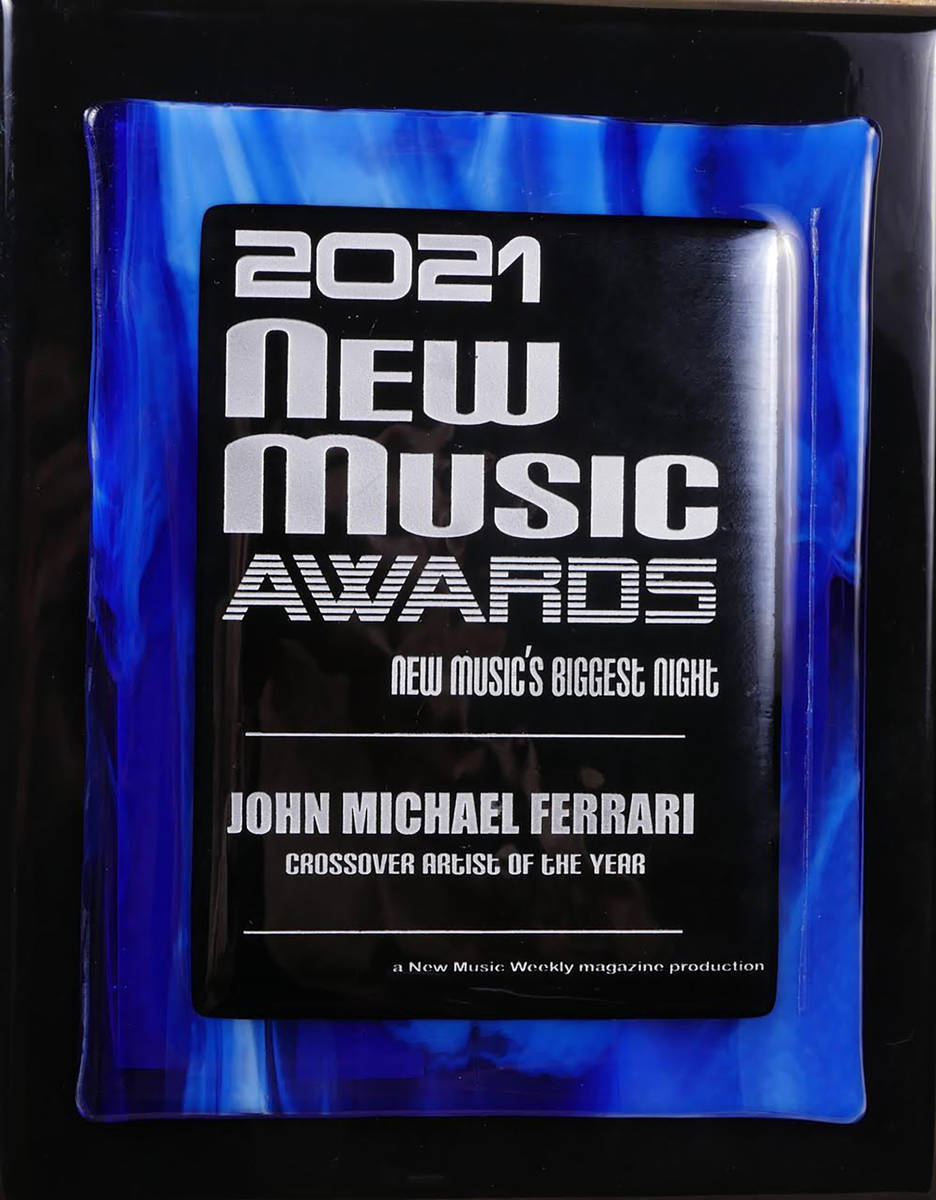 Special to the Pahrump Valley Times John Michael Ferrari was named Crossover Artist of the Year at the 2021 New Music Awards. 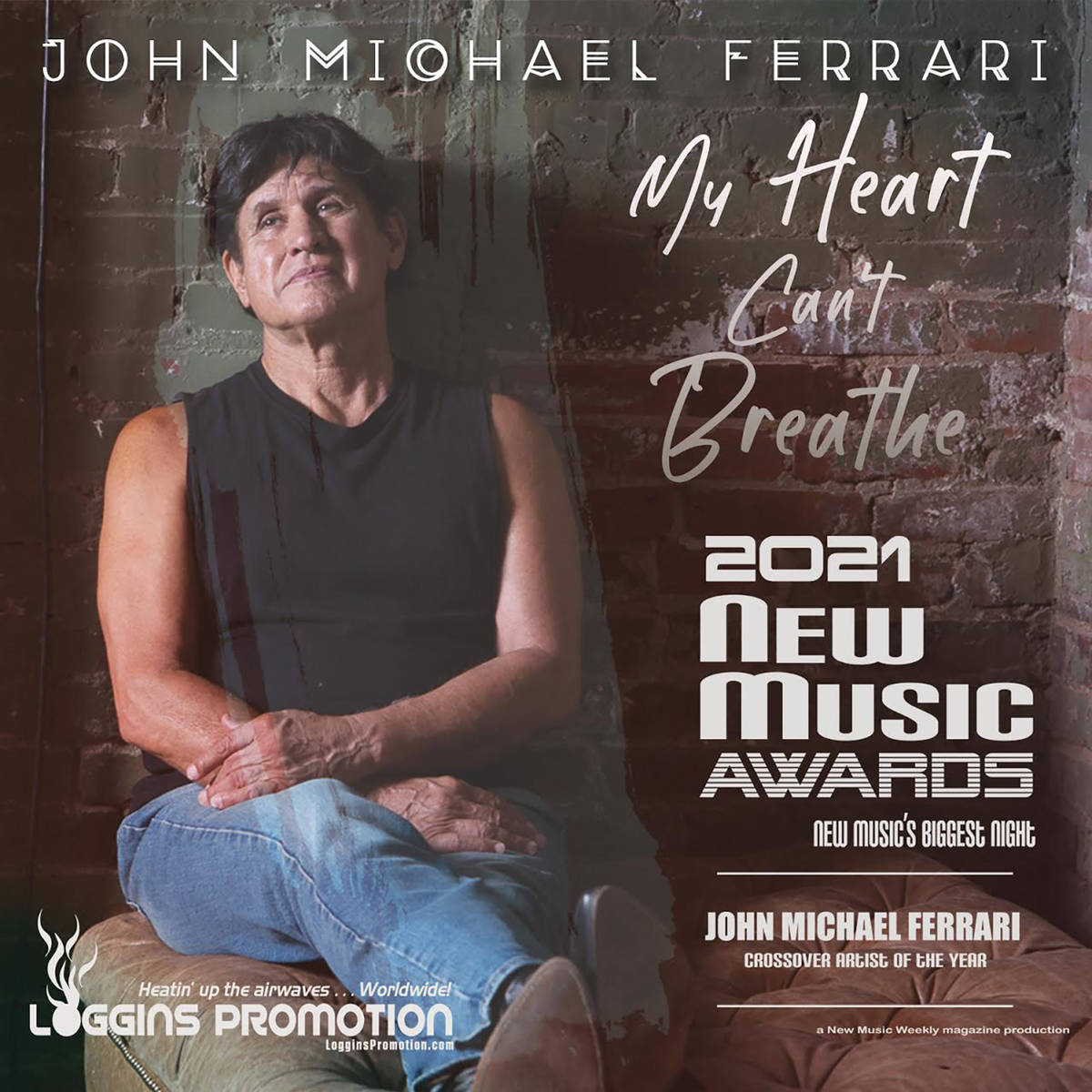 Special to the Pahrump Valley Times John Michael Ferrari's newest song "My Heart Can't Breathe" will be released on August 10. 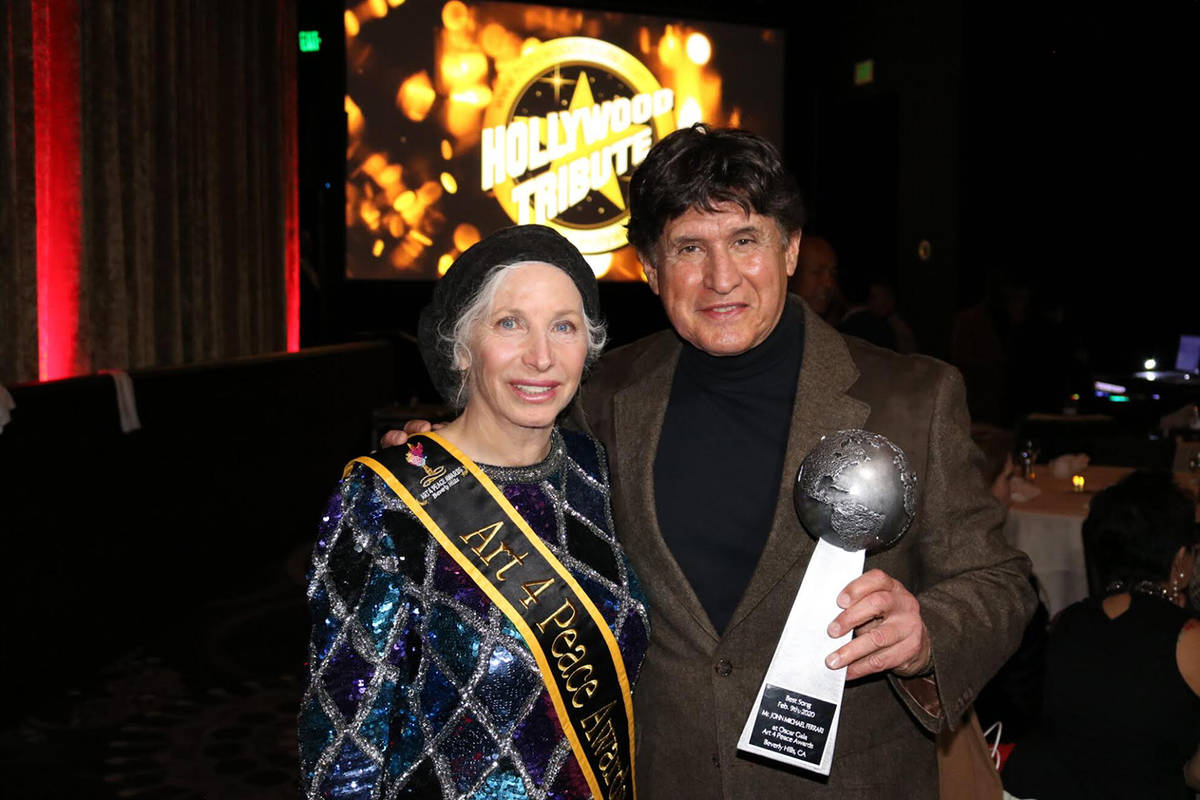 Special to the Pahrump Valley Times John Michael Ferrari is pictured with his producer Pepper Jay. 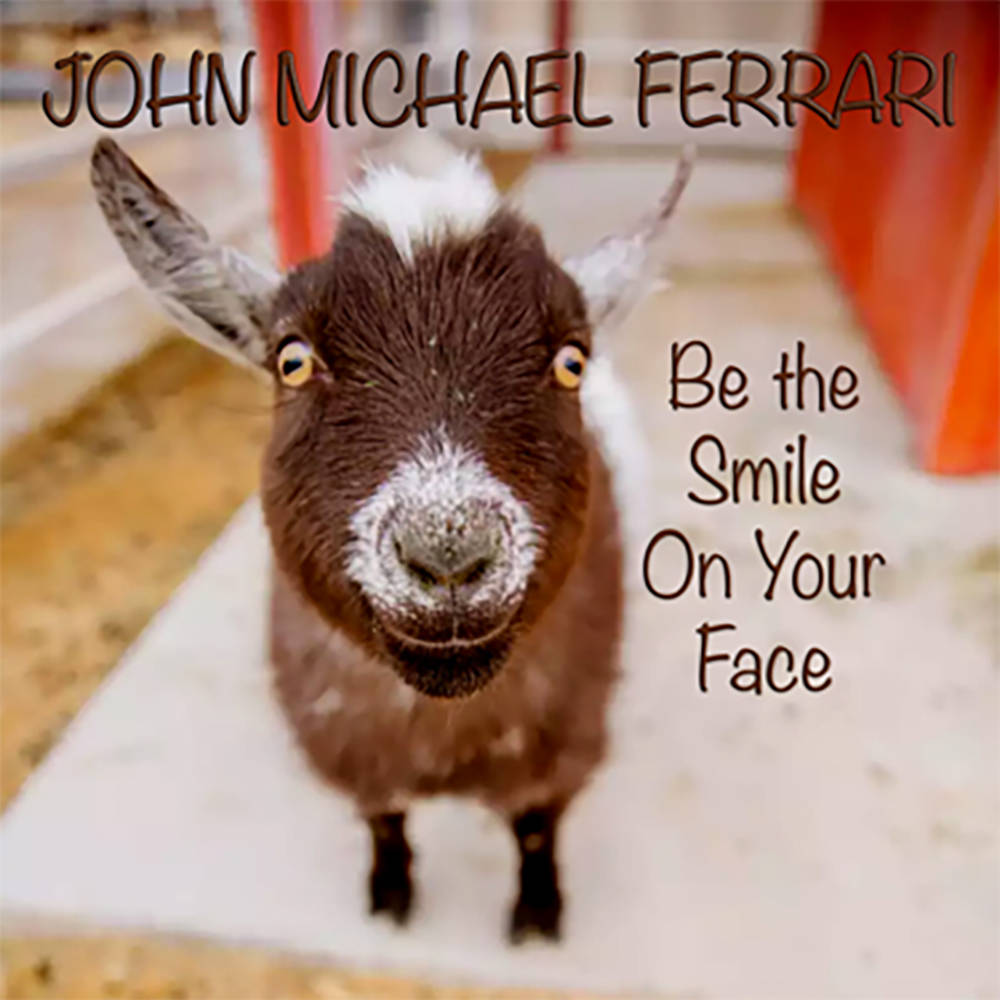 Special to the Pahrump Valley Times The album "Be the Smile on Your Face" earned John Michael Ferrari the Triple A Album of the Year award for 2021.

Artistic passion takes many forms and for local resident John Michael Ferrari, it’s music and entertaining others that fires his enthusiasm.

A longtime singer and songwriter with a deeply embedded love of all things lyrical, Ferrari has spent years creating music and presenting it to the world and recently, he earned several more feathers in his musical industry cap.

For 2021, Ferrari has taken home an array of awards, including Crossover Artist of the Year by New Music Awards and Rising Star of the Year by Virtual Golden Gala Wall of Fame Awards.

This year has also seen Ferrari recognized for one of his newest songs as well as his latest album, with the song “Like a Rock ’n’ Roll Band” being named Peace Song of the Year by Art for Peace and the album “Be the Smile on Your Face” taking the Triple A Album of the Year award from Producers Choice Honors.

It’s far from the first time that Ferrari has garnered such prestigious recognition and it will likely not be the last, but no matter how many times he is honored with awards that highlight his talent and and passion, his feelings of profound appreciation never seem to fade.

“I am always grateful and fulfilled by the appreciation of an audience. However, this latest recognition, Crossover Artist of the Year, as well as several previous awards over the past two years, are most unusual because strangers I pass in everyday life come up to me and congratulate me either on the success of a song or the honor of an award. It brightens my life!” Ferrari told the Pahrump Valley Times.

Ferrari noted that he has been playing music and composing his own songs since childhood, recalling that he spent many hours as a youngster standing in front of a mirror, guitar in hand and trying to mimic the king of rock and roll, Elvis himself.

“Music has given me an opportunity to meet people as I’ve performed all over the country. I’ve discovered there is never a stranger in the audience,” he said. “By nature, we all need to be creative, to create something. That’s our way of contributing to society and to the world. Music should make one feel good and I hope that’s the reaction of others to my music. It’s exciting that several of my songs have been on the radio in the U.S. and internationally and five of them have hit several radio charts.”

Ferrari, who produces under the independent record label Cappy Records, is set to release a brand new single next week as well, a song that takes a bit of a different form than a majority of the other pieces he has written.

“‘My Heart Can’t Breathe’ is different from most of my other songs,” Ferrari detailed. “Most of the many songs I’ve written and arranged, like the 12 tracks on my previous album ‘Be the Smile on Your Face’, were love songs. ‘My Heart Can’t Breathe’ is a breakup song. You know that feeling when your heart hurts and you feel you can hardly breathe? I wrote it after seeing a photo of myself and a friend from long ago and my heart hurt seeing it because we no longer are together as friends.”

“My Heart Can’t Breathe” is scheduled for release on Tuesday, Aug. 10 and will be available on a variety of platforms, including iTunes, Apple Music, Spotify, Reverbnation and more.

Ferrari made sure to shine the spotlight on the many others whose efforts have helped make him the music-man he is today. “Musical success is a collaboration from several different directions,” Ferrari said. “I appreciate my music producer Pepper Jay, and also my radio promoter Paul Loggins, as well as Larry Beaird Music Group in Nashville where I recorded my last album as well as ‘My Heart Can’t Breathe’, and the fantastic studio musicians who have played on my tracks.”

Ferrari encouraged those who love good music to check out his newest single when it is released and noted, “I would appreciate fans asking their local radio station to play ‘My Heart Can’t Breathe’ by John Michael Ferrari.”