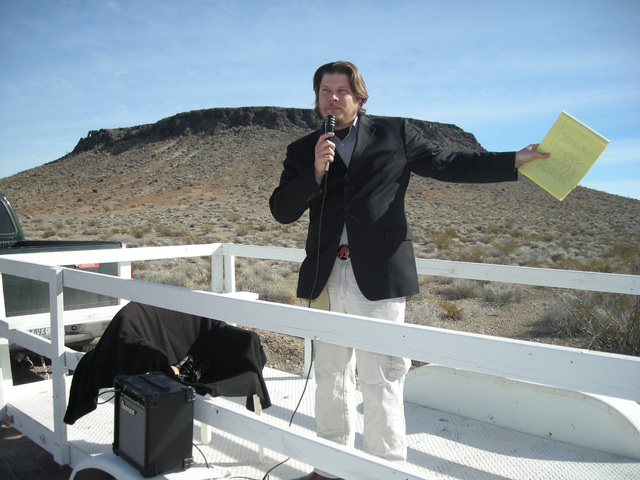 After a more than week-long trial, a jury convicted Duensing on charges of resisting a police officer, carrying a concealed weapon, and unlawful possession of a firearm in connection with a traffic stop on Oct. 29, 2009. An officer shot Duensing three times when he tried to run from the northwest valley scene.

The Pahrump attorney ran an unsuccessful bid on the Libertarian ticket this year to become Clark County’s top prosecutor and head the office that pursued the criminal case against him. He was the only opponent to incumbent Steve Wolfson, who was elected with 72 percent of the vote.

At the encounter along Cheyenne Avenue near Jones Boulevard five years ago, Metro motorcycle officer David Gilbert asked Duensing at least three times to turn around before the officer grabbed his stun gun. Duensing had outstanding traffic warrants, and Gilbert wanted to arrest him.

Duensing took the witness stand last week at trial and said the officer never told him why he was being arrested.

“I said ‘You’re not going to Tase me,” Duensing told jurors. “I was trying to process what was going on. I thought he had the wrong person.”

Duensing was hit with probes from the stun gun and started to run because he feared for his life, because he had heart and lung troubles, he told the jury.

Gilbert testified that he saw Duensing reach for a gun in his cargo pocket as he ran. Duensing, who denied ever reaching into his pocket for the gun, suffered gunshot wounds to the chest, abdomen and left arm.

Defense lawyer Tom Pitaro tried to show that Gilbert could not have seen Duensing’s gun because it was tucked in the buttoned-up cargo pocket. A knife in his right hip pocket was not found by police until after he was shot.

District Judge Michelle Leavitt ordered Duensing held in the Clark County Detention Center until a January sentencing when he faces up to 12 years in prison.