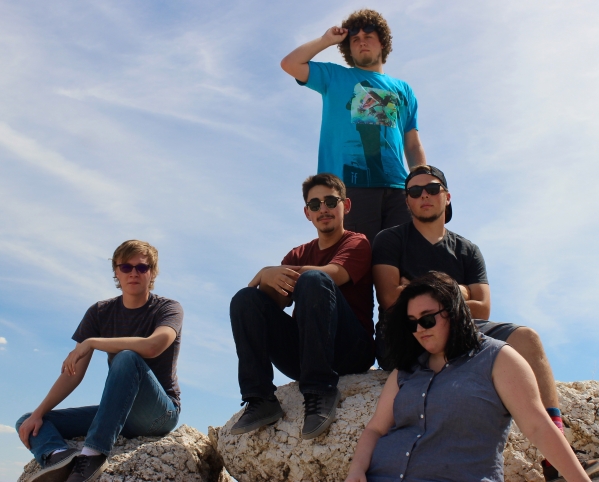 A Pahrump-based rock band called Social Amnesia has found themselves going from their garage to singing at the Hard Rock Cafe in just a matter of months.

The band competed in a Las Vegas band competition called XPOZ Battle of the Fans, which had over a 100 other bands. Social Amnesia is now in the semi-finals, where eight bands will be selected to play at the Extreme Thing Sports and Music Festival on April 2 at Desert Breeze Park.

The band is composed of four Pahrump Valley High School students and one from Las Vegas.

“I was playing in a band with Blake Wendel, our guitar player and when that band broke up Blake and I stayed together. We started playing together and Zachary Poznicek, another guitar player, started playing for us and then we found our lead vocalist on Craigslist and that’s how we got started.”

Other members of the band are Zackery Peek, guitar player and Samantha (Sam) Gingrich, vocals. Gingrich is a senior and attending classes at the College of Southern Nevada in a special program which allows seniors to get college credits.

Duvall said the band is best described as alternative rock with a blues influence.

“We had no real expectations on the sound when we first started,” Duvall said. “So we jammed until it sounded good. Poznicek would listen to the sound and he would tweak us and fine-tune us.”

“We got her from Craigslist and look, we are all still alive,” he said laughing. “She has strong vocals like Hayley Williams (lead singer of Paramore) and an opera singing background.”

Gingrich laughed when she heard that Poznicek said Hayley Williams and the opera training.

“I told them I once sang some opera, but I would hardly call it opera training,” she said. “And well I guess Hayley Williams is close, but I am more like if Stevie Nicks and Hayley Williams had a baby, that’s my voice. On the training, I have had formal voice training.”

When asked about the Craigslist thing and traveling all the way out to Pahrump for practice, she replied, “I really wanted to be in a band,” she said. “I had been looking for months to sing in a band and I was on the couch relaxing when I saw the Craigslist post. It didn’t scare me that the band was all the way in Pahrump. I texted them for an audition, talked it over with mom and that was that.”

Gingrich did say she had to wait for the boys to get back to her – a whole month.

“That pissed me off,” Gingrich said. “But now that we are friends, I am OK with it.”

Oh, and if you are wondering if she is related to former Speaker of the House Newt, the answer is yes, he is a distant cousin, but they have never met.

As far as the name of the band, Gingrich said the band argued over the name for a while.

“The name ‘Social Amnesia’ was not my choice. It was Poznicek’s idea. I wanted the name ‘Razor Blade Pancakes’. I thought at first that Social Amnesia was bland, but now it has stuck.”