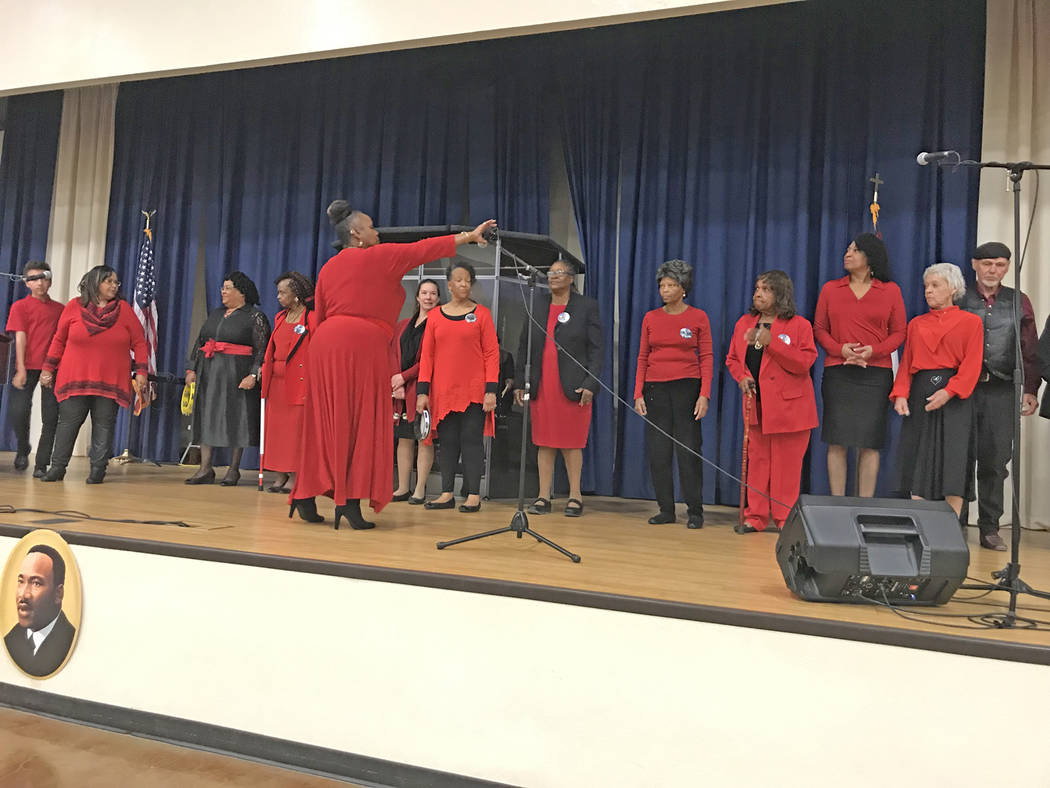 Vern Hee/Special to the Pahrump Valley Times The Martin Luther King Jr. Community Choir was just one of the entertainers gracing the stage during this year's All People's Lunch, a scholarship fundraising event hosted in memory of the civil rights activist who believed in the value of education. 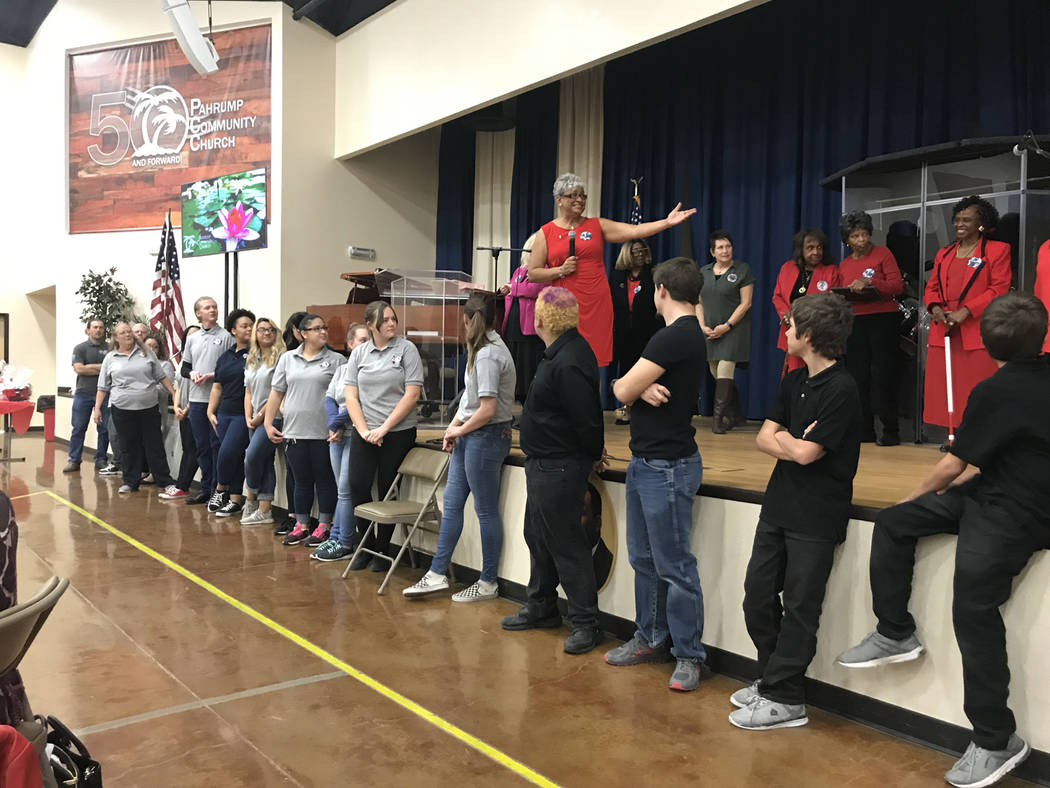 Vern Hee/Special to the Pahrump Valley Times Pahrump Martin Luther King Jr. Scholarship Foundation officials offer thanks to the committee members, Pahrump Valley Key Club and AmeriCorps volunteers for all their assistance in making the 2019 All People's Lunch a success. 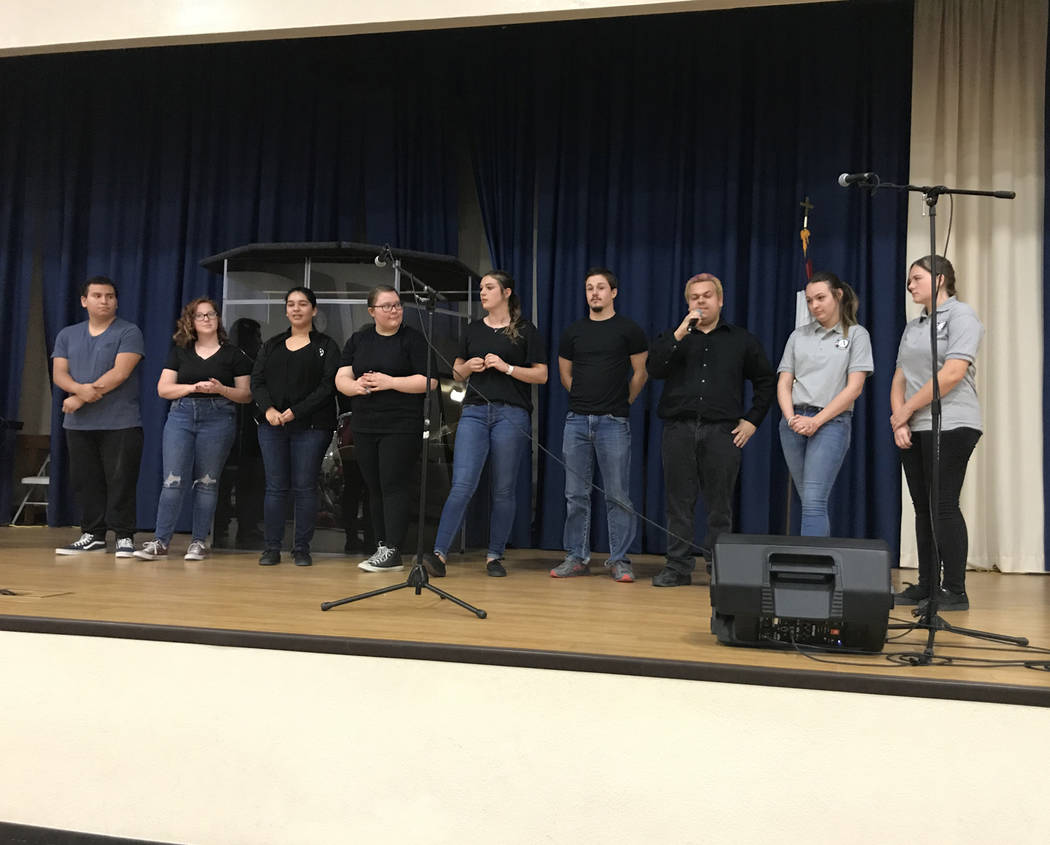 Vern Hee/Special to the Pahrump Valley Times High school seniors from both Key Club and AmeriCorps were invited on stage to share where they are planning to go to college, to inspire attendees to increase their donations toward the Martin Luther King Jr. Scholarship Foundation. 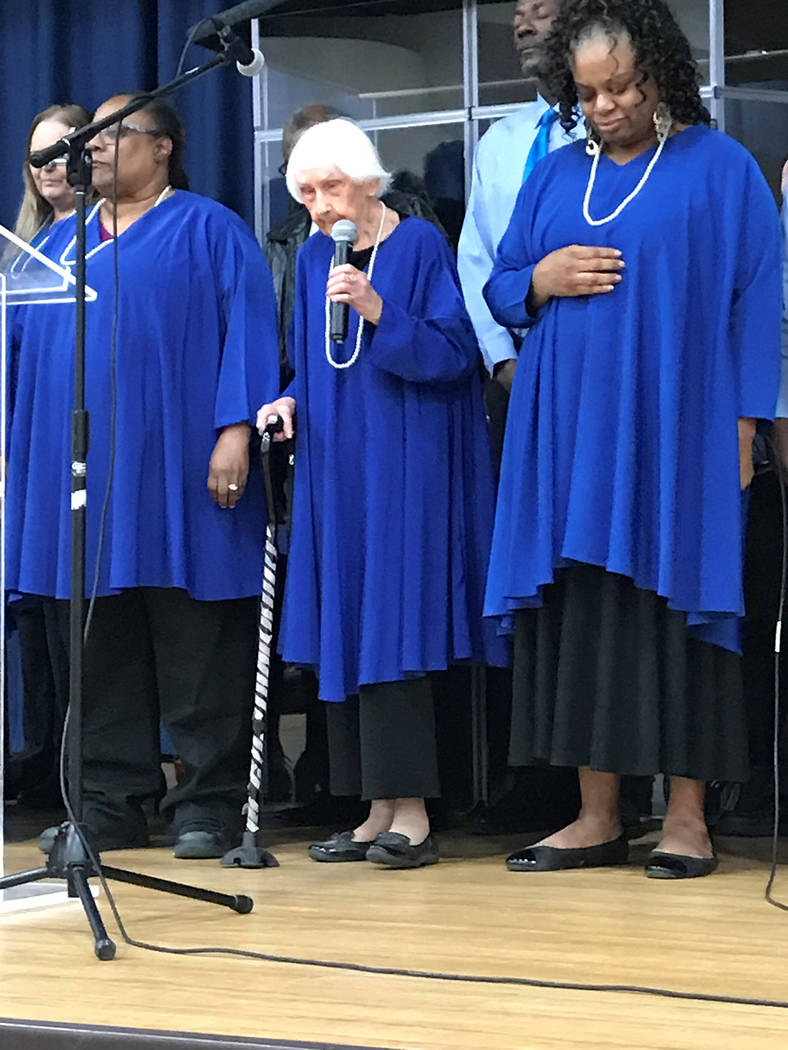 Vern Hee/Special to the Pahrump Valley Times The Blind Singers of Las Vegas perform during the All People's Lunch, held Jan. 21 at the Pahrump Community Church.

Martin Luther King Jr. Day was celebrated across the country on Monday, with festivities, parades and events all geared toward continuing the legacy of one of America’s most iconic civil rights activists.

Here in Pahrump, the local Martin Luther King Jr. Foundation hosted its annual All People’s Lunch and it was hailed as a success, raising thousands of dollars which will be infused back into the community via scholarships for area students who plan to pursue higher education.

Though the All People’s event saw a dip in attendance in the past couple of years, Joyner noted that this year things were ticking back up to where they were previously, a fact she was very pleased by.

Obviously tired following the event on Jan. 21, Joyner was nonetheless filled with enthusiasm and delight at the event turnout. “It went fantastic. We were back up to probably 200 people… It’s building back up now,” Joyner said brightly. “We had a lot of youth help us this time. We had kids from AmeriCorps come out in full force and kids from the high school Key Club. We had a lot of volunteers and it was a good event.”

Though the lunch had only ended hours before her interview, Joyner provided a best-guess estimate of the amount brought in during this 2019 event.

“It’s a little early to know exactly how much we raised but I know we did a few thousand dollars, for sure, because I did the silent auction and just with that we were almost up to $600. And with the ticket sales and everything else, we’re probably close to $3,000 after expenses,” Joyner detailed.

Just because the event is over does not mean residents cannot still help boost the organization and its mission. Joyner said there are spots available on both the scholarship committee and the board of directors and anyone who wishes to join would be more than welcome.

“And of course, people can always donate, we are still raising money. We don’t give the scholarships out until the end of the school year so if someone would like to donate, that would be amazing,” Joyner stated.

“Now the big part comes – getting the scholarships to the kids,” Joyner continued. She emphasized how imperative it was for students to submit their names, not just for the Martin Luther King Jr. scholarships but for all scholarship opportunities.

“Students need to go to the counselors’ office and pick up the application. And there are many other organizations out there as well, giving out scholarships, who have money for the kids. But they need to get those applications filled out and turned in! That’s the most important part.”