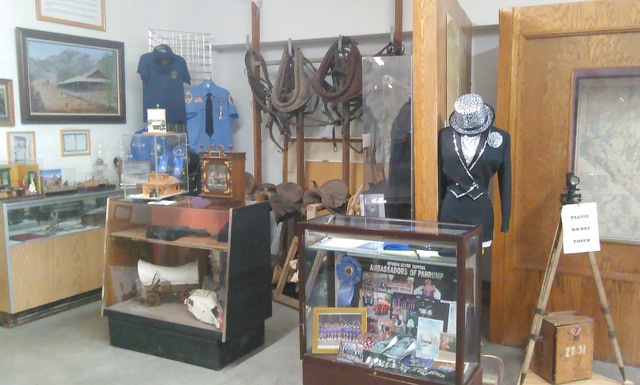 Costumes and memorabilia of the Nevada Silver Tappers is one of scores of exhibits at the Pahrump Valley Museum and Historical Society. This month, the Nevada Commission on Tourism approved a $2,500 grant to promote programs that increase overnight stays and boost awareness to the community. Selwyn Harris / Pahrump Valley Times

Davis learned the Nevada Commission on Tourism approved a grant proposal from the museum for $2,500.

The funds will go toward efforts to boost museum visits from out-of-town visitors.

Pahrump was one of six communities to receive the funding among five other first-time applicants in the Silver State.

Davis said this week that it was her first attempt ever at writing a grant proposal.

Doubtful or not, Davis’ efforts will allow for the creation of a project designed to draw interest in the community by way of a series of television broadcasts entitled, “History on the Go.”

“We want to do a video presentation to be produced by Ted Faye, who has done several for other museums,” she said. “They are about Nevada, but he’s also done a couple in California.”

The project involves producing a seven-to-10-minute video about the museum which will appear on Public Broadcasting Service channels in Clark and Washoe counties as well as in Southern California and the Sacramento area.

Nevada Lt. Gov. Mark Hutchison in a press release, strongly supported the grants, especially for the more rural areas of the state.

“The (Nevada Commission on Tourism) grant program supports rural Nevada in its efforts to increase overnight visitation, a vital economic component in so many of our state’s communities,” Hutchison, tourism chairman, said. “Programs that drive overnight visitation to bring room tax revenue to these rural communities as well as to the state, and (Nevada Commission on Tourism) strongly supports rural Nevada in those efforts.”

Davis, meanwhile said the grant could not have come at a more crucial time, as the number of people who visit the museum is down this year.

“We had less visitors this year than we had last year,” she lamented. “We are looking to get more visitors here and to do whatever it takes to try to get them here. We are seeing a drop in Canadian visitors because their dollar is not as strong here as it is there. I also keep hearing that nobody knows we have a museum here in Pahrump and that’s part of the ‘History to Go’ project, which is to get more people here, obviously.”

Davis noted that the entire Pahrump project should be completed in early 2017.

The video will cover numerous facets of Pahrump’s beginnings.

Some of the topics will focus on the early settlers, many of which were miners and farmers.

Davis spoke about one of the newest exhibitions at the museum.

“It involves the history of ham radio in our area,” she said. “We had a ham radio lecture last month with John Schumacher and if anyone goes on our website they can review the lecture.”

While pondering her first grant award, Davis said she was a bit apprehensive when a letter from the Nevada Commission on Tourism arrived in the museum’s mailbox this week.

“When I received the letter, I kind of just put it on my desk and forgot about it for a little while and went about my normal daily duties,” she said. “I just learned about it on Tuesday and it gives me a little more confidence to go for other grants now that I was granted one on my first attempt.”

As a side note, 2017 marks the 25th anniversary of the Pahrump Museum and Historical Society.