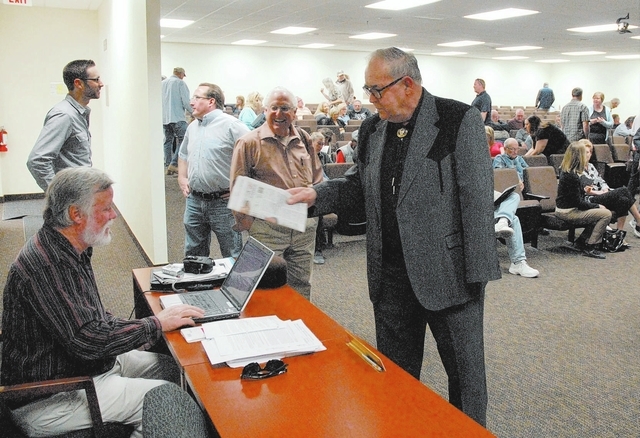 Commissioner Butch Borasky Tuesday withdrew a bill to reduce the size of the Pahrump Planning District 38 percent in the north and northwest areas of Pahrump Valley, a proposal planners said could cost the county as much as $100,000.

“I quite often go by the north end of town on the way to Tonopah, Crystal and Beatty and everywhere else and I see quite a bit of nothing out there and scratch my head and wonder why Pahrump has to have such firm control over land that is 80 percent BLM land to begin with,” Borasky said.

In looking at Nye County Planning Director Bobby Lewis and Principal Planner Steve Osborne, Borasky said, “not that I don’t trust you guys or believe in what you’re doing, but why do we have to have such a control over a bunch of weeds out in the desert?”

The bill would have reduced the size of the planning district from 373.04 square miles to 231.46 square miles. The Pahrump Town Board voted 4-1 not to recommend approval and the Pahrump Regional Planning Commission voted unanimously against the bill.

Lewis said the county planning department has a fiduciary duty to protect the public, zoning creates the certainty property values and the public interest will be protected. He said a lot of planned facilities are in the federal lands, he referred to the flood control plan and capital improvement plan.

Borasky said the area lacked schools, bus stops and paved roads. If the case is about protecting citizens, he suggested extending the planning district up to Crystal, Beatty, even Tonopah and Gabbs.

Lewis said eight documents have been drawn up based on the existing Pahrump Regional Planning District boundaries that would have to be amended if Borasky’s plan was implemented. They include the 2003 master plan for Pahrump Valley, the 2007 zoning map, dust control regulations enacted in 2004 and the 2005 capital improvements plan. Maps would have to be redrawn and property owners notified, he said.

But Commissioner Frank Carbone said a committee is currently updating the Pahrump master plan and the county is supposed to be updating the MOU on the dust control plan this month. Other studies don’t refer to specific boundary line descriptions, he said.

But Commissioner Lorinda Wichman said the federal government has to recognize comprehensive land use plans, like in Amargosa Valley, but it doesn’t require zoning. When Lacy implied there could be zoning throughout the county, Wichman replied, “do you know how many pitchforks and shotguns they have outside the PRPD?”

Longtime developer Tim Hafen said he never heard of a good reason to change the boundaries. He said the U.S. Bureau of Land Management has property all around Pahrump.

“There could be many unintended consequences: another detention center; they could have their own utility district similar to what Spring Mountain (Motor Sports) is doing, that wouldn’t be a deterrent. Could that area be a landfill for waste coming from California and waste from those areas? Could a large residential neighborhood go in there and avoid all the planning and zoning requirements and mitigation measures that are required in the Regional Planning Commission? What about being outside the water conservation plan, that’s supposed to be a Basin 162 initiative?” Hafen asked.

Borasky was quick to respond.

“I’m glad a lot of you think I’m on the take and you can kiss my grits on that one because I resent that,” the commissioner replied.

“I don’t know if it really matters, there’s not enough water to put anything up there, let alone a subdivision or anything else. This is not to benefit any one person. I don’t want to put in another detention center. I already got tagged on the first one and that could’ve been sited in a better location but due to greed in this valley it ended up where it is,” he said.

District Attorney Brian Kunzi seemed to drive the final nail in the coffin. He suggested it could be spot zoning if the county doesn’t give specific reasons why they would differentiate between a property on the south side of Roadrunner Road that’s in the PRPD and one on the north side that isn’t.

Kunzi added a lot of the area was on the alluvial fan where the county may want to implement flood control measures. It also reduces the area subject to a memorandum of understanding with the U.S. Environmental Protection Agency over dust control, he said. The DA also questioned a gerrymandered small strip of land going up the middle.

Indications were the proposal could be brought up again.