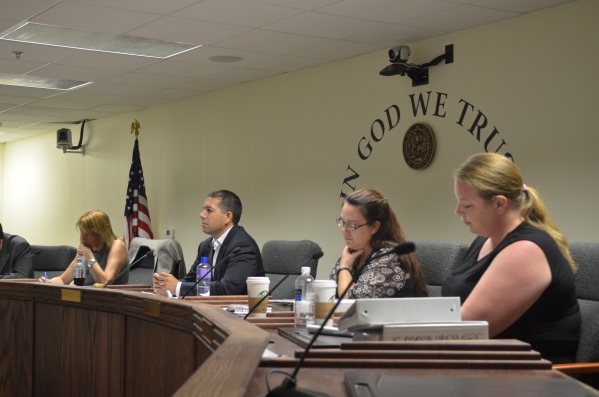 During the session, some of the attendees questioned the need to increase the annual revenue for water and sewer service rates by 12.34 and 5.7 percent respectively.

As Pahrump resident Jerry Cornelison asked if anybody was against the increase, several dozen people held their hands up and nodded affirmatively.

“Why are we getting a 13 percent increase, why?” he asked.

“What do we, the people get for our investments?”

“I read all the previous information about the investments and improvements that you’ve made, that’s wonderful, but we still, and Utilities, Inc., still has to look at a future and look where they need to go on a step-by-step basis, not wait till the 13 percent or 15 percent or 12 percent increase. Nobody in the industry is getting those kinds of numbers back for their investment.”

UICN Regional Director Wendy Barnett said the company is looking to recover about $4.5 million worth of investments that had already been completed throughout the town. Most of the projects were determined “prudent” prior to being installed in the Integrated Resource Plan process with the PUCN.

Barnett cited the American Society of Civil Engineers report that gave Nevada a “C” for its water infrastructure. Nevada will need nearly $5.6 billion over the next 20 years to maintain its drinking water systems and conserve valuable water resources, according to the report.

“The urban areas in Washoe County and Clark County, their facilities are in fair to good condition and they have adequate funding to make improvements at least for the next five years, as opposed to rural Nevada. Rural Nevada, facing aging infrastructure, also has a lack of funding. UICN during this time of aging infrastructure has continued to make the necessary improvements to ensure safe, reliable drinking water and proper state-of-the-art spot water treatment capabilities,” she said.

Barnett also said there’s been a lot of miscommunication about Discovery Park that is not included in the rate increase.

“There’s nothing in this rate case about Discovery Park, there’s no park out there, and as I mentioned, we would have to do investment before we ask for a recovery of funds per capital investment. In addition, it is not the Utilities’ intention to build a park on the back of the ratepayers. We are hoping to build a park, an education park for the community with the community, to the benefit of the community,” she said.

In addition to taking into account consumers’ feedback, PUCN will consider facilities that have been put in place, UICN’s previous requests and other data.

Based on the evidence, the commission may adopt rates higher or lower than the rates proposed by UICN. The next step in the process will be a staff testimony, according to the documents.