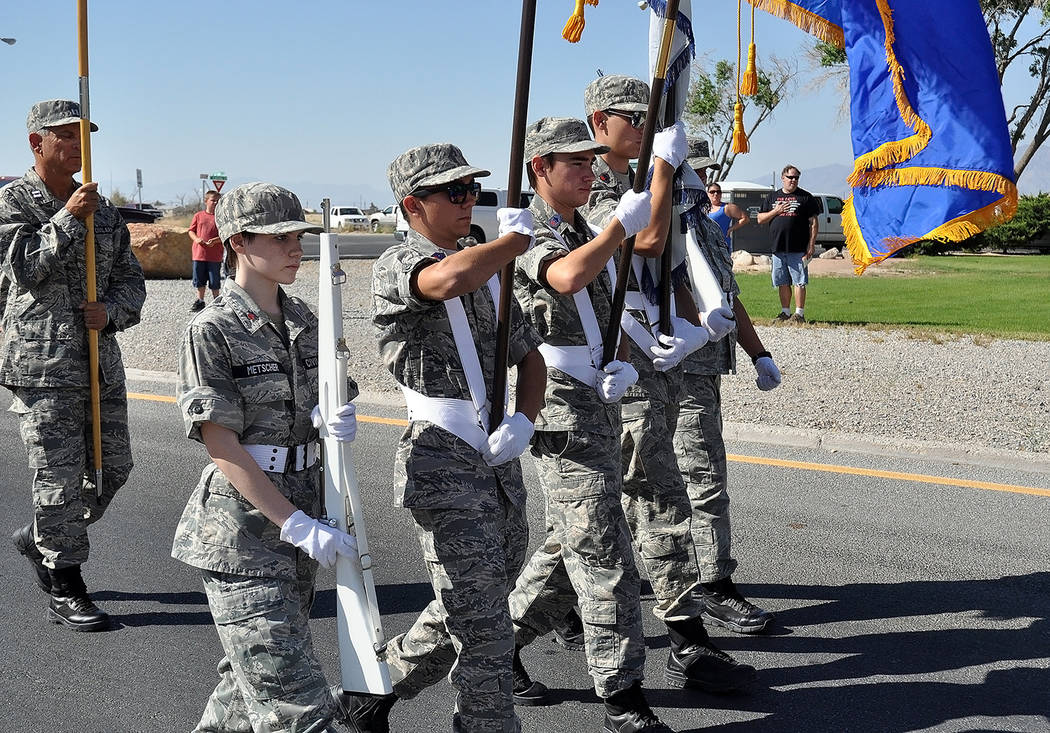 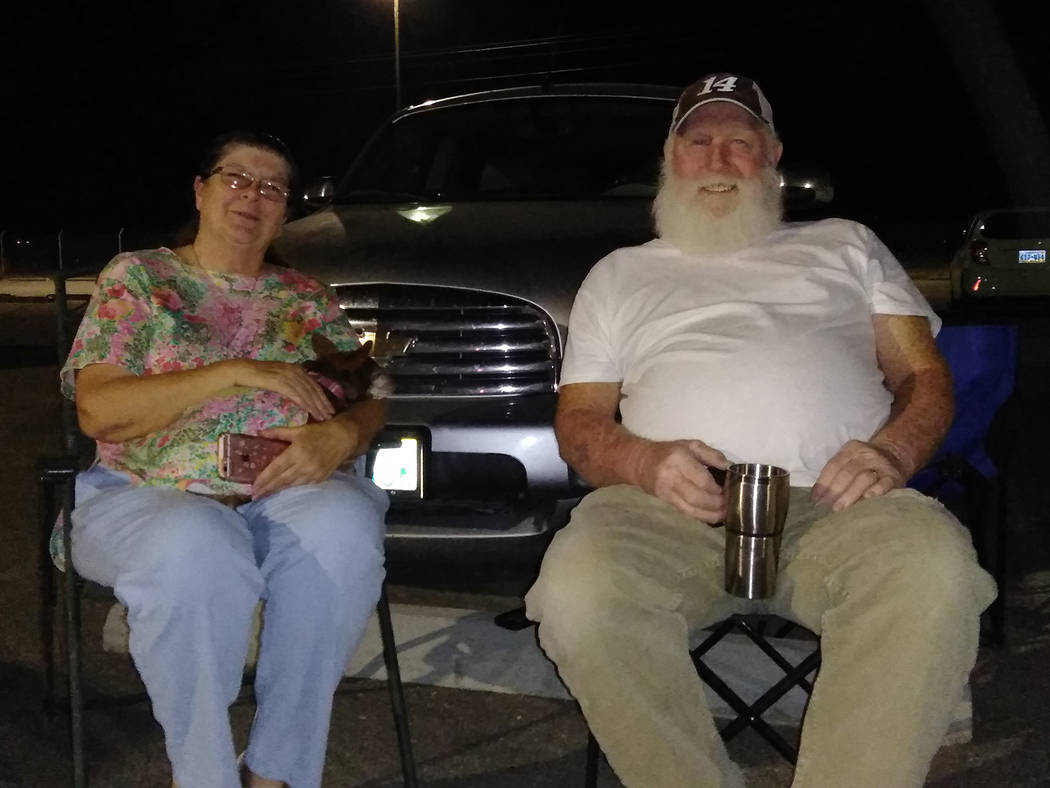 Selwyn Harris/Pahrump Valley Times Pahrump residents Melinda and Tom Mangan opted to just their son and grandchildren light up the evening sky from the parking lot of the fireworks shooters site on Wednesday evening. 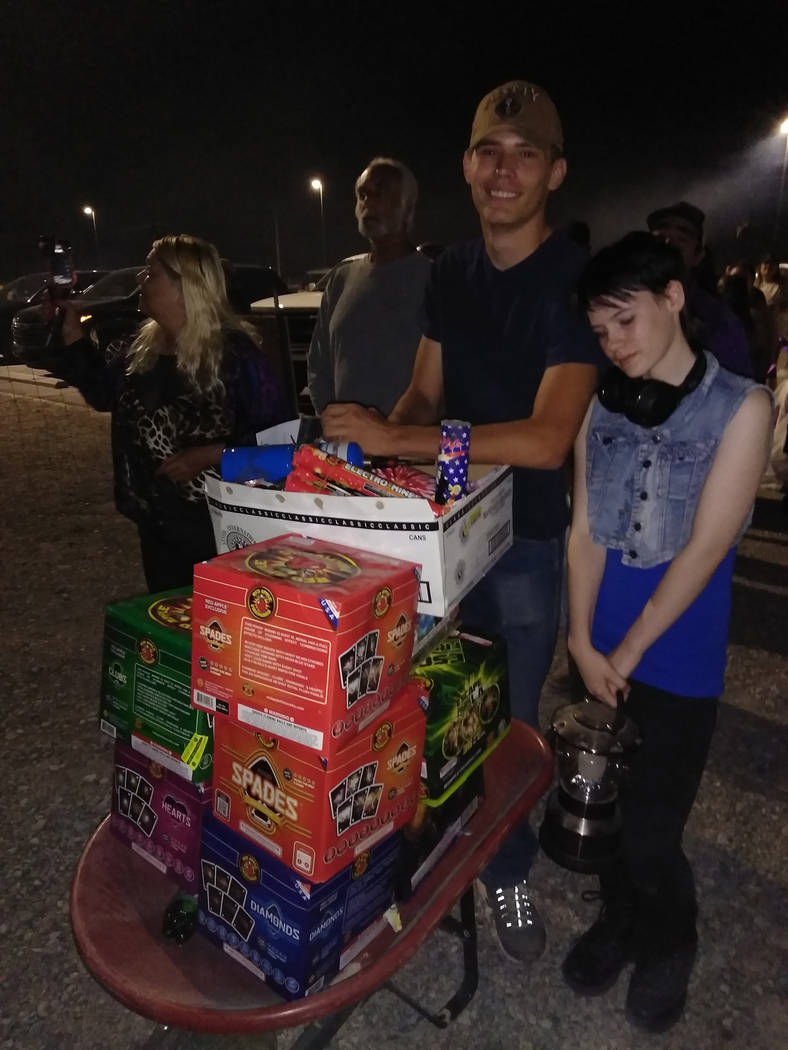 Selwyn Harris/Pahrump Valley Times A wheelbarrow was required for two local residents to bring their cache to the shooters site. Officials shuttled revelers to different sections of the southend location where they had roughly 30 minutes to fire off their stockpiles. 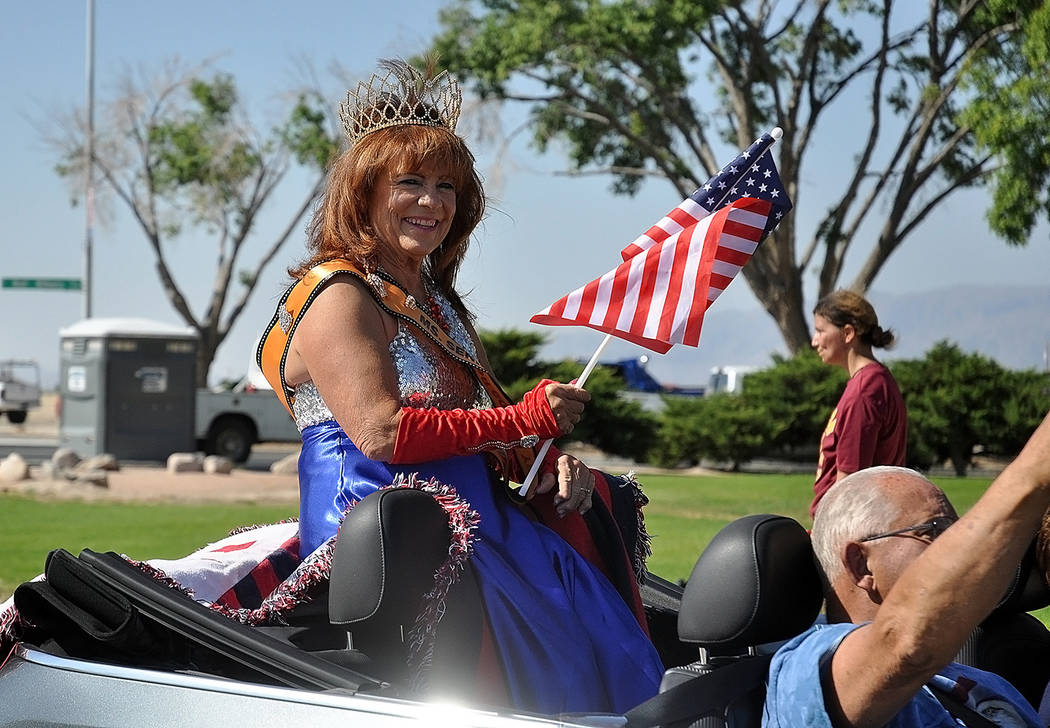 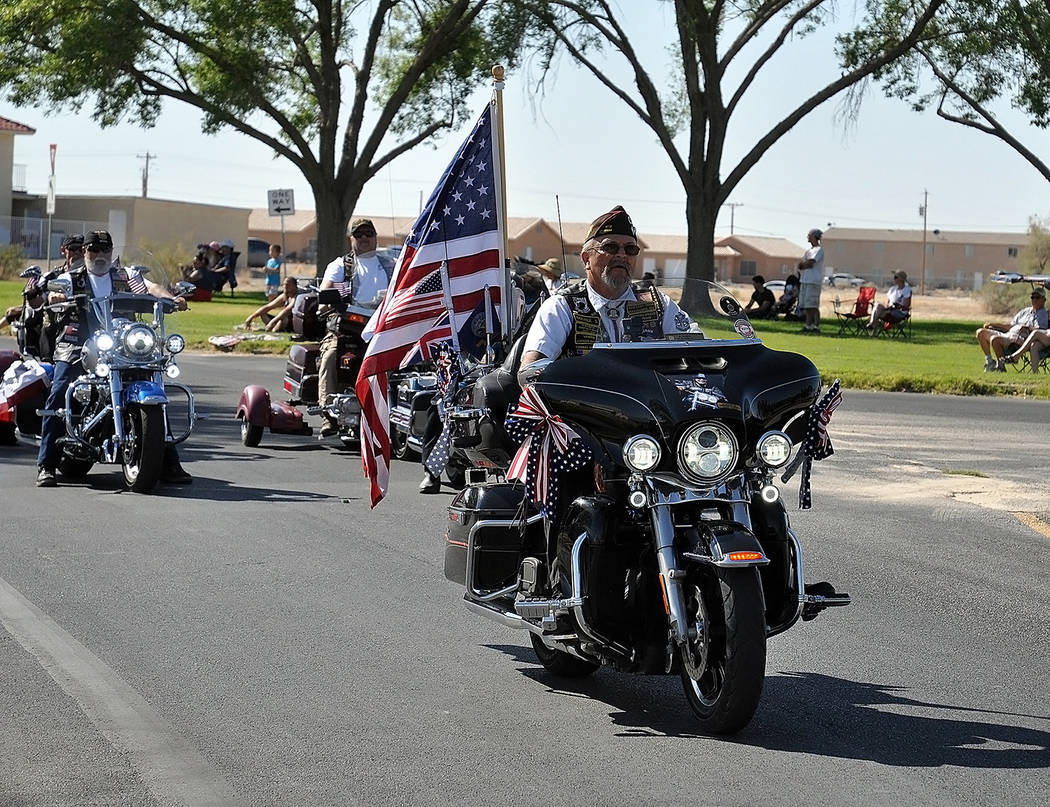 Horace Langford Jr./Pahrump Valley Times The VFW Riders displaying the Star Spangled Banner were a crowd favorite, among 25 other entries at the Independence Day Parade. Wednesday's pancake breakfast also served as a fundraiser for Pahrump's VFW Post 10054 on Homestead Road.

Stars and stripes were the order of the day during the town’s Independence Day celebrations this week.

The hues were prominently on display during Wednesday’s annual July Fourth Parade at the Calvada Eye.

“We ended up having 26 entries in the parade, including floats, military units and antique cars going around the Calvada Eye,” she said. “We had a few political floats in the parade, like Lisa Chamlee and Frank Carbone, who are both running for Pahrump justice of the peace this year. We also had the Nye County Republican Party float, as well as Dennis Hof and Sheriff Sharon Wehrly.”

And the winners are

From that lot, parade judges awarded trophies to five entries.

“The Most Enthusiastic trophy went to the Heritage Bible float, while the Most Patriotic entry was won by the VFW motorcycle riders,” Wright said. “The Judges’ Choice was the Nye Republican Party float.”

Two additional categories included the most Family-Friendly float, which was awarded to 10047 VFW Train from Las Vegas, while the Most Original entry went to the Pahrump VFW classic cars, Wright noted.

Just prior to the parade was the annual VFW pancake breakfast, which began at 6 a.m.

“It was a success, as always,” Wright said. “They served a lot of people again this year, and I’m happy that everybody stayed for the parade. We had lots of spectators this year, but of course, there’s always room for more.”

Additionally, Wright said she was fortunate and pleased to have a number of individuals who provided much-needed support throughout the day.

“Everybody worked as a team where we got the parade entrants lined up and organized,” she said. “I just want to thank everyone that helped with the parade and I really want to thank the entire community for coming out and supporting us on this Independence Day celebration. Next year, it should be even better.”

Fire in the hole

Later on Wednesday evening, the local fireworks shooters’ launch site along Fox Avenue was at capacity throughout Wednesday evening as an untold number of local and non-local residents lit up the sky on the far south end of town.

Individuals and families with fireworks in hand began lining up well before the 7 p.m. opening for the opportunity to fire off their hoard of rockets, Roman Candles and a vast array of sparkly projectiles toward the heavens.

All shooters were given roughly 30 minutes to launch their cache.

Two such individuals, Manny Rose and Gerald Wagner, drove nearly 400 miles to Pahrump from a community near Palmdale, California.

Both were standing in line waiting for their turn to shoot.

“We’re here to do our Fourth of July fireworks,” Rose said. “This is my very first time visiting the shooters’ site. We came out here because this is where they have the best fireworks to buy.”

Wagner, meanwhile, spoke about the strict laws in the Golden State regarding the use of fireworks.

“We’re shooting off our fireworks here because we can’t shoot them off in California,” he said. “I really hate that law. I bought a lot of aerials like rockets, missiles, and Roman Candles. This is the stuff that we can’t do in California. As Manny said, this is our first time out here, and we will definitely be back next year.”

Though five-year Pahrump residents Tom and Melinda Mangan chose not to launch any of their own fireworks this year, both were content just watching their son and grandchildren light up the sky from the parking lot of the site.

“We came out here last year for the very first time and we really enjoyed it,” Melinda Mangan said. “It’s very well organized, and it’s just wonderful to be able to come out in a safe environment and watch the kids and adults shoot off all of their fireworks. It’s safer here than in the neighborhoods, and it’s very nice because they paved this parking lot area. We’re just watching my son and my grandchildren out there, and they are really having a good time.”

Tom Mangan, on the other hand spoke about what things were like years ago, prior to the launch site’s opening to the public, where fireworks purchasers had to get their products out of town within a specific period of time, or face getting cited.

That ordinance was changed by the Nye County Board of Commissioners back in 2015.

“Before this launch site opened, the laws were pretty confusing out here because you could buy them but you couldn’t shoot them out here,” Mangan said. “You actually had to sign a waiver promising that you’d take them out of the county, which was odd.”