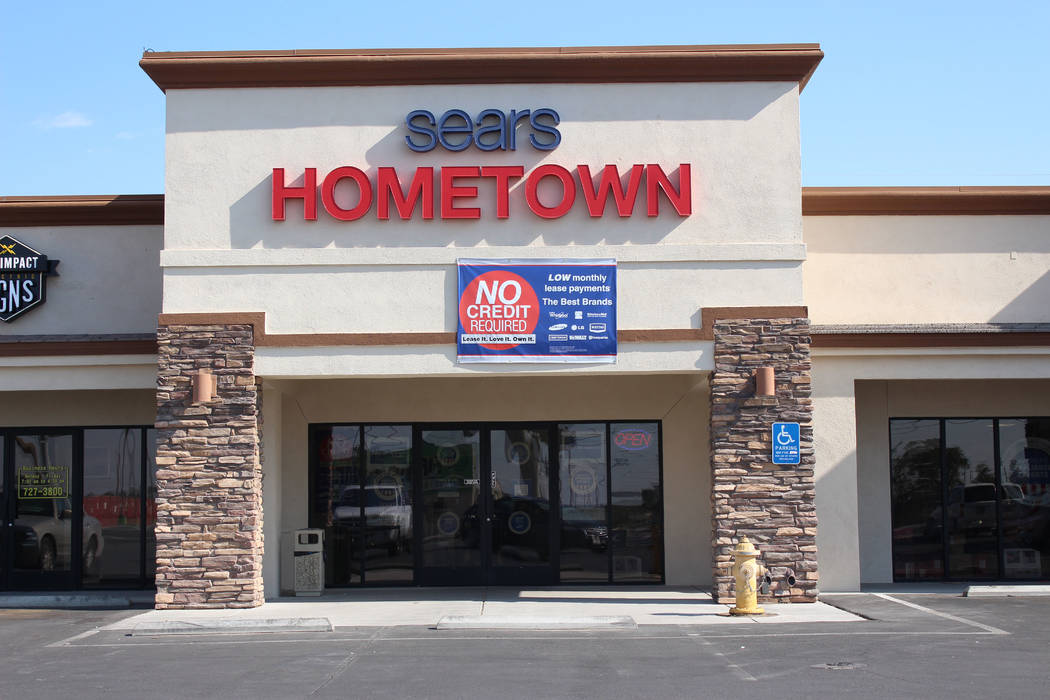 Jeffrey Meehan/Pahrump Valley Times Sears Hometown Store at 1360 E. Highway 372, Suite 4, on July 12, 2017. The Pahrump store is one of hundreds across the nation to be rebranded and welcome an extended product line.

The Sears Hometown Store in Pahrump is one of hundreds of locations across the country that has gone through a rebranding—bringing in additional products and technology upgrades that increase access to a wider variety of merchandise.

“With the integration of technology into our shopping experience, we’re able to offer a greatly improved shopping experience,” said Lennie Hill, a district manager of the Sears Hometown Stores in Nevada, in a written statement. “Customers will be able to search and compare any combination of appliances they can think of through our in-store kiosks…”

As part of the refresh, the local store at 1360 E. Highway 372, Suite 4, added “more brands and an improved presentation,” Sears Hometown and Outlet Stores Inc. (SHOS), said in a news release. Nationwide, Sears Hometown is also changing its branding to America’s Appliance Experts.

“The stores’ appliances are also focused on innovative and value-added products from LG Electronics Inc., General Electric Co., Whirlpool, Maytag, KitchenAid, Samsung Electronics Co. and Kenmore,” according to the company.

The new look in Pahrump was announced by Sears Hometown and Outlet Stores in June, along with another location in Fallon. Overall, the company has updated more than 635 locations, or more than 60 percent of its portfolio, as of a June 7 news release. The companywide initiative began in 2015.

The upgrade data includes corporate locations, along with independent franchise stores, with the Pahrump location being one of those.

Generally, franchise owners are responsible for operating costs such as rent and payroll but not its inventory, according to information on the Sears Hometown corporate website.

Sears Hometown provides the merchandise for the store’s operator, which averages $200,000 to $300,000, along with supplying marketing efforts. Franchisees are then paid a commission for sales, along with collecting revenue from protection agreements, credit offerings and delivery and installation services.

Franchise owners must have a minimum of $20,000 cash and a positive net worth of at least $100,000 to open a new store. Options for adding a Sears Hometown label to an existing business, which already has a physical location, are also available.

Sears Hometown, which spun off in 2012 from Sears Holdings Corp., owner of Sears department stores, has traveled down a similar path with store closure announcements becoming a regular occurrence.

Sears Hometown and Outlet Stores operated 1,012 stores, across 50 states and Puerto Rico and Bermuda, as of April 29. That number includes holdings by independent dealers and franchisees as well, according to a news release from Sears Hometown corporate.

That’s down from the 1,245 locations the company held in early 2013, nearly a 19 percent decrease, information from a Securities and Exchange Commission filing in February 2013 showed.

A large portion of store closings occurred in the company’s 2016 fiscal year. Based on a net loss of 140 locations, about 66 percent of the company’s closures occurred during fiscal year 2016, which ended in January. The company shuttered 160 locations in that period—though 20 new stores came online as well.

Not all the information is negative.

Positive rifts occurred during the first quarter for Sears Hometown stores that had gone through a rebranding to the America’s Appliance Experts.

According to a first quarter earnings report, statistics showed sales on appliances with the new branding were 408 basis points above stores that hadn’t converted, which is equal to about 4 percent more sales.

In May, Sears Hometown decided that it would close more stores, to better use its capital and reduce costs, the company said. The company, which operates two separate labels, Sears Hometown and its Outlet Stores label, planned to shutter 22 stores (10 Hometown and 12 Outlet locations).

Sears Hometown also made plans to purchase back 14 franchise locations in the first quarter, and the company could make plans for this type of deal in the future.

“We view reacquisitions of franchisee-operated stores that are not meeting our performance expectations as an important part of our long-term strategy,” the company stated in an earnings report at the end of April.

State of retail across the nation

Sears Holdings, owner of Sears and Kmart stores, has closed many of its stores since 2012 as well. The iconic brand that once did business through catalog orders has gone from 867 full-line Sears locations to 626 at the end of the first quarter.

The company also plans to close more than 70 Sears stores by the end of 2017.

Some of its other holdings have also been reduced in size, with Kmart sitting at 624 locations at the end of the first quarter. That’s a decrease of more than 50 percent in locations since 2012, when there were more than 1,300 Kmart stores in operation.

This is not an unusual tale in today’s market, as retailers have announced closure of thousands of stores in 2017 alone. According to Fung Global Retail &Technology, the U.S. should expect more than 9,400 retail locations to close in 2017.

Names such as Payless Shoes and Rue21 Inc. announced entry into Chapter 11 bankruptcy in 2017. Just those two retailers alone account for more than 1,000 store closings.